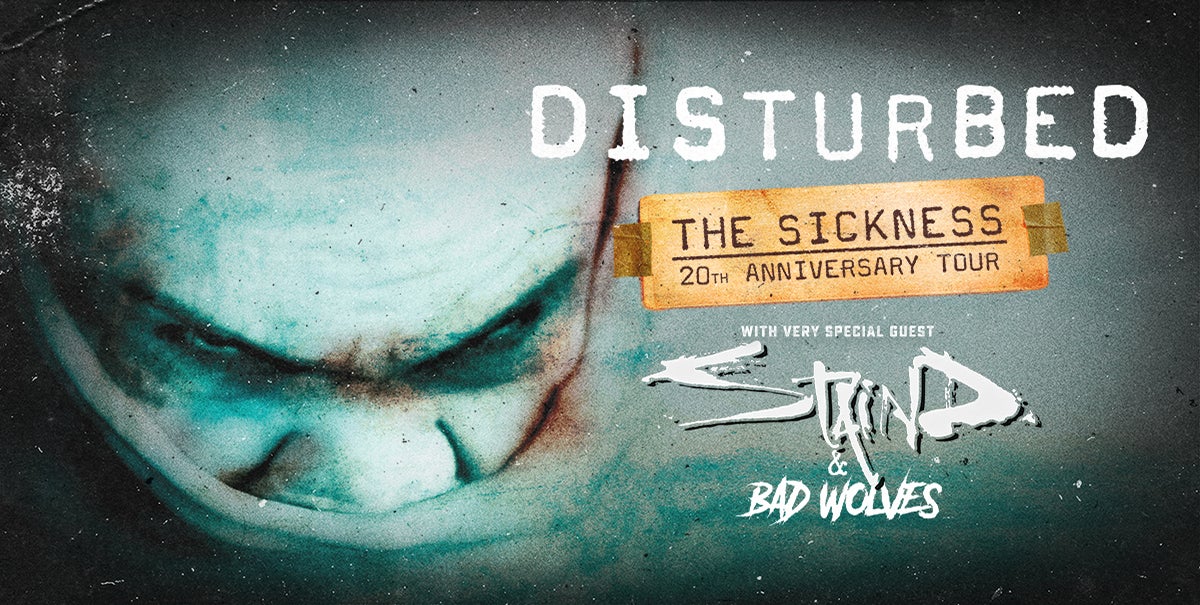 Disturbed’s “The Sickness 20th Anniversary Tour” with Staind and Bad Wolves at DTE Energy Music Theatre on Sunday, August 16, 2020 has been rescheduled to take place on Sunday, July 18, 2021.

Two-time Grammy® nominated and multi-platinum band, Disturbed an extensive 31-date “The Sickness 20th Anniversary Tour” throughout North America, co-produced by Frank Productions and Live Nation. The amphitheater tour, with very special guest Staind and Bad Wolves, celebrates the two-decade anniversary of the band’s seminal album, The Sickness. On this tour, the band will perform songs off the album, as well as tracks from their most recent studio release, Evolution, and their extensive catalog.

Disturbed have continued their record-breaking streak at rock radio, claiming the title of “2019’s Most Played Artists” in the Active Rock format. The band earned their seventh consecutive #1 on the Mediabase Active Rock Chart and Billboard’s Mainstream Rock Songs Chart with their latest single “No More,” an achievement unmatched by any artist in history. Disturbed have earned ten #1 singles on the chart, including “A Reason To Fight,” the track that initially broke the record earlier this year. “No More” is the third top-charting single from the band’s #1 album, Evolution (Reprise Records).

Watch Disturbed's music video for "A Reason to Fight"

Watch Disturbed's music video for "Hold on to Memories"

Disturbed's new music video for "Hold on to Memories" is directed by Matt Mahurin, who also directed their “Sound of Silence” music video. The video is inspired by the Mexican holiday “Día de Muertos,” a day of remembrance and celebration of loved ones who have passed, with which it shares the sentiment that as long as we keep their memories with us, a piece of them is still alive.

Simply put, Disturbed are one of the most successful rock bands in modern history. The multiplatinum-selling quartet accomplished the rare feat of achieving five consecutive number one debuts on the Billboard Top 200. That accolade historically elevated them to rarified air alongside Metallica, the only other hard rock group to do so in the history of the chart. Immortalized (2015) received a platinum certification and spawned the triple-platinum crossover smash “The Sound of Silence,” which garnered a nomination at the 2017 Grammy® Awards in the category of Best Rock Performance. Since their formation in 1996, the band has sold 16 million albums globally and scored 12 #1 singles at Active Rock Radio. Their quadruple-platinum 2000 debut, The Sickness, formally announced their arrival as hard rock leaders, with that status solidified by subsequent Grammy® Award nominations as well as gold-, platinum- and double platinum-certified records, as well as countless sold-out shows around the globe. Named Best Rock Artist during the 2017 iHeartRadioMusic Awards, Disturbed continue to boldly forge ahead with the release of their aptly titled seventh offering, Evolution.

Aaron Lewis, Mike Mushok, Johnny April and Jon Wysocki formed Staind in 1995 in their hometown of Springfield, Massachusetts. Over the course of their career, the band released seven studio albums and eight Top 10 singles, selling over 15 million albums worldwide. Break The Cycle, released in 2001 and RIAA certified 5x platinum, featured the smash single, “It’s Been A While,” one of the most played songs in modern rock radio history, spending 20 weeks at #1. Staind is currently comprised of lead vocalist and rhythm guitarist Aaron Lewis, lead guitarist Mike Mushok, bassist and backing vocalist Johnny April and drummer Sal Giancarelli. This year Staind reunited for a few select dates, after a five-year hiatus. www.staind.com

Bad Wolves consists of vocalist Tommy Vext (ex-Divine Heresy), drummer John Boecklin (ex-Devil Driver), guitarist Doc Coyle (Vagus Nerve, ex-God Forbid), guitarist Chris Cain (Bury Your Dead) and bassist Kyle Konkiel (ex-In This Moment). They released their debut album, Disobey (May 2018), via Better Noise Music, which reached #22 on the Billboard 200, #2 on the Hard Rock Chart, #4 on Rock and #8 on the Top Current Albums Chart. Their global breakout single, “Zombie,” is certified Platinum in the U.S. and Sweden, double Platinum in Canada, Gold in Australia and IMPALA Diamond in Europe. The track has topped charts worldwide, including the U.S. iTunes Overall and Rock charts, Billboard’s Mainstream Rock Songs chart, Spotify’s Global Viral 50 chart, while also reigning atop the Active Rock radio chart for three straight weeks. The album yielded the follow-up tracks “Hear Me Now,” featuring Diamante, and the soaring ballad “Remember When,” which both reached #1 at Active Rock Radio. The official music video for “Zombie,” a tribute to the late singer Dolores O’Riordan of The Cranberries and an homage to the original, has garnered over 255 million views across platforms. On June 19, 2018, Bad Wolves presented a $250,000 check to Dolores O’Riordan’s four children, with a continued promise to donate all of their royalties from the song to them. In 2019, they continued that momentum with their sophomore album, N.A.T.I.O.N. which came in at #1 upon its release on the Top Hard Rock, Current Hard Rock and Billboard Hard Rock charts. The single “Killing Me Slowly” recently hit #1 to make it four consecutive #1 songs for the band at Active Rock Radio.