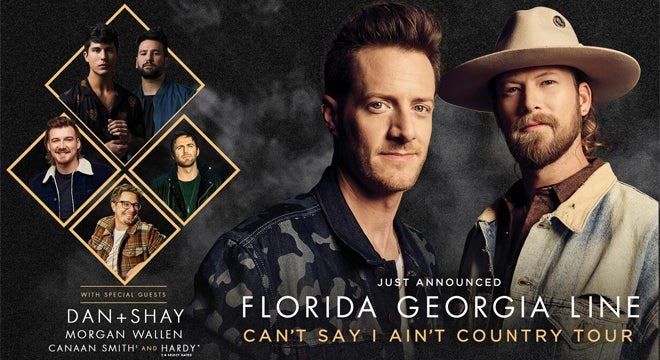 “We’re ready to party even bigger in 2019,” FGL’s Brian Kelley shared with Billboard. “Lots of pyro, energy, and good vibes, with a few surprises up our sleeves. And we’re so glad to be bringing our buddies along for the ride!”

FGL’s Tyler Hubbard added, “We can’t wait to get back out and play all of these new songs for you! It’s going to be fire!”

With a “perfectly cheeky album title” (USA Today), FGL will perform songs from the 19-deep track list, including their chart-rising single, “Talk You Out of It.”

The powerhouse duo covered Nashville Lifestyle’s January cover of “The Music Issue,” with the magazine praising, “In the country music industry, perhaps no star is rising — or business expanding — more rapidly than that of the Florida Georgia Line brand.”

About Dan + Shay
Grammy®-nominated duo Dan + Shay debuted atop Billboard’s Top Country Albums chart with their self-titled third studio album the same week that its lead single “Tequila” reached No.1 on the Country Airplay chart, marking the first time since 2009 that a duo or group has topped both charts simultaneously. Their Platinum-certified single “Speechless” recently followed with a four-week No. 1 at country radio and a seven-week reigning run on Billboard’s Hot Country Songs chart. The single has already sold upwards of 1.3 million track equivalents, including more than 175 million streams. “Speechless” follows the Double Platinum-certified viral hit “Tequila,” written by Smyers, Jordan Reynolds and Nicolle Galyon, which became their first multi-week country radio No. 1 and is currently nominated for the Grammy® Awards’ “Best Country Duo/Group Performance” and “Best Country Song.” They’ve performed the global smash, which has accumulated 355 million on-demand streams, on Dick Clark’s New Year’s Rockin’ Eve, Jimmy Kimmel Live!, Ellen, the CMA Fest concert special, the 53rd ACM Awards, TODAY Summer Concert Series, the CMT Music Awards and the 52nd CMA Awards. With “Tequila” and “Speechless,” Dan + Shay boast the two of the five most-streamed country songs of 2018, and they became only the sixth artists ever to hold the top two spots on Billboard’s Hot Country Songs chart simultaneously.

The skyrocketing pair made SoundScan recorded history as the first new country duo to debut at No. 1 on Billboard’s Country Albums Chart with their Gold-certified first album, Where It All Began, featuring the No. 1 single “Nothin’ Like You” and the Platinum-certified “19 You + Me.” The breakout duo followed up with 2016’s Obsessed, which produced two more No. 1 hits with the Gold-certified “How Not To” and the Platinum-certified “From The Ground Up.” Dan + Shay recently joined Chris Young for the fall leg of his “Losing Sleep” run; they will kick off their sold-out “Dan + Shay The Tour” in March 2019.

About Morgan Wallen
Rising hitmaker Morgan Wallen is making his mark on Country music. Between Platinum-certified #1 summer smash “Up Down,” featuring Florida Georgia Line and his highly anticipated follow-up single “Whiskey Glasses” burning up the charts, Wallen has burst onto the scene as a dynamite solo artist and in-demand songwriter. Wallen’s debut album If I Know Me (Big Loud Records), premiered in April of 2018, and was soon after named one of Taste of Country’s “Top 10 Country Albums of 2018, So Far.” With over 400 million combined digital streams to his credit, he was spotlighted in CMT’s Listen Up “18 for 2018” class of newcomers, named a 2018 Taste of Country RISER, and earned opening spots touring with the likes of Luke Bryan, Florida Georgia Line, Chris Lane and Jake Owen. Wallen has co-penned hits for a Thousand Horses, Dustin Lynch, Kane Brown, and Jason Aldean, most notably on Platinum-certified #1 “You Make It Easy.” The Tennessee native is currently on his 27-city headlining “If I Know Me Tour” presented by Shiner Light Blonde.

About Canaan Smith
Rolling Stone raves, “If you haven’t heard of Canaan Smith yet, chances are you will be hearing quite a bit of him...overall, we feel the singer-songwriter is one of the sharper artists to keep an eye on.” Possessing a smooth, evocative voice, Smith could have pursued success in any genre of music, but was always drawn to country. “It’s all about the stories,” Smith says. “You can listen to a country song and it will raise the hair on your arms. I’m a people person and I love being able to connect with people so it makes the most sense for me to be able to tell my stories and connect with people via country music. I want them to find a piece of themselves in the music. I want them to be moved by it. I want it to hurt. I want it to celebrate. I want them to feel like they can take on the world.” Smith’s debut album, Bronco, which includes the RIAA Platinum-Certified #1 Hit, “Love You Like That” debuted in the Top 5 on Billboard’s Country Albums Chart. “Love You Like That” is also one of the top streaming tracks from all new artists in Country music, besting many songs from the genre’s superstars. The chart-rising singer-songwriter is now signed to trailblazing music publishing roster Tree Vibez Music and is hard at work on new music, giving fans a taste of what’s to come with his digital smash “This Night Back” already racking up 25 million+ streams. Smith’s reputation as a road warrior and one of the top live performers in Country music has not happened by accident. Along with his headlining dates, he has been burning up the highways in recent years with the likes of Dierks Bentley, Brantley Gilbert and Kip Moore; playing well over 550 shows for more than two million fans. He recently joined FGL for their limited December residency, Florida Georgia Line Live From Las Vegas inside Zappos Theater at Planet Hollywood Resort & Casino.