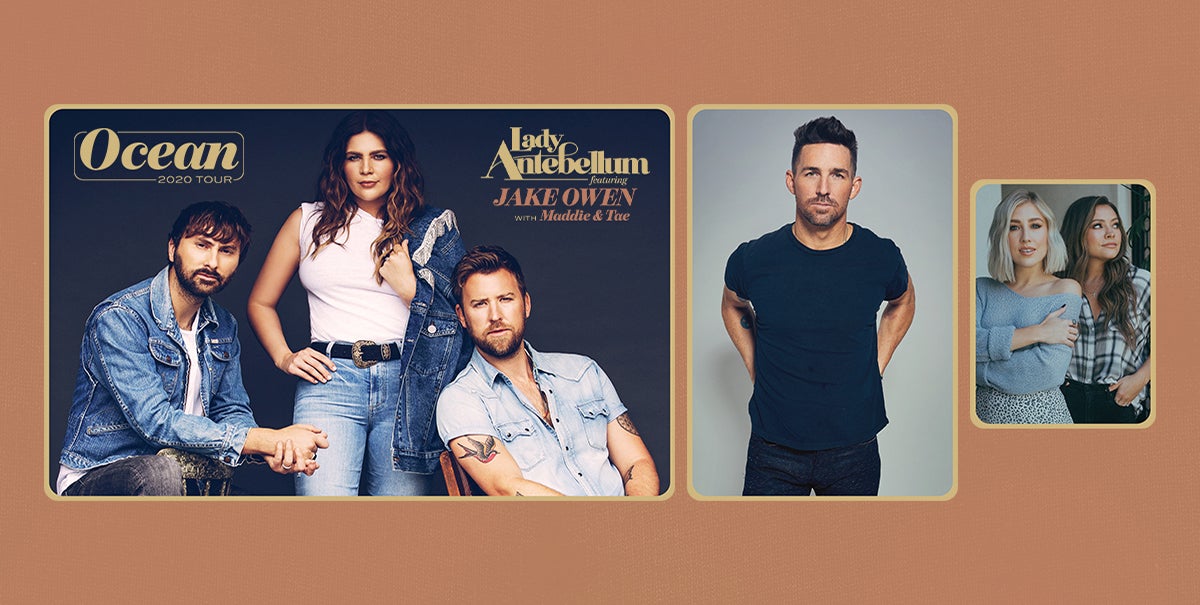 The on-sale for “Ocean Tour 2020” at DTE Energy Music Theatre is to be announced. To receive announcements and access to the latest information on on-sales, presales, special offers and events, contests, breaking news and more for concerts and events at DTE Energy Music Theatre, Little Caesars Arena, Fox Theatre, Comerica Park, Meadow Brook Amphitheatre and Michigan Lottery Amphitheatre at Freedom Hill, fans can sign up here.

“After our Vegas residency and working on this record for the past year we are itching to get back out on the road and see how the fans gravitate to some of the deeper cuts off of Ocean,” Charles Kelley said. “We’ve missed those huge crowd sing-alongs and we are looking forward to having Jake Owen and Maddie & Tae light up the stage every night. May can’t come fast enough.”

Throughout the “Ocean 2020 Tour” Lady A will showcase why they are “one of Country's top groups for over a decade” (Billboard) with a hit-filled set including their Top 3 and climbing single “What If I Never Get Over You.” Lady A will let loose, too, with many swaying live-and-let-live moments mixed with fan-favorites while they make notable stops such as Los Angeles’ Hollywood Bowl before concluding the headlining run at Nashville’s Bridgestone Arena.

In preparation for the “Ocean 2020 Tour,” Lady A brought Jake Owen as well as Maddie & Tae to Nashville's Santa's Pub to road-test nostalgic cover songs which turned into a competition. Watch the video to see how the karaoke battle panned out: youtu.be/LeLCC2gqxE4

Over the course of their decade-plus career, Lady Antebellum has become one of the 21st century's premier vocal groups, blending deeply felt emotions with classic country sounds. As a Country-radio staple, the trio has amassed record-breaking success with nine #1 hits while ushering in more than 18 million album units and 34 million tracks sold, with over four billion digital streams. The trio recently earned the biggest first week streams of their career with their critically acclaimed #1 album Ocean (BMLG Records). Known for their 9X Platinum hit “Need You Now” which is the highest certified song by a Country group, they have earned ACM and CMA "Vocal Group of the Year” trophies three years in a row and countless other honors including seven Grammy® awards, Billboard Music Awards, People’s Choice Awards, Teen Choice Awards and a Tony Award nod.

Award-winning duo Maddie & Tae are drawing praise for their new music “anchored around their stellar vocal pairings and some of the tightest harmonies on Music Row” (Rolling Stone) with a “sound that’s identifiable while still representing a distinct step forward” (Billboard). Maddie & Tae first broke out in 2013 with their brilliant “Girl In A Country Song,” which took Country radio by storm, skyrocketing to the top of the charts and quickly going Platinum. The duo became only the third female duo in 70 years to top the Country Airplay charts, also earning trophies from the Country Music Academy and Radio Disney Music Awards along with multiple ACM, CMA and CMT Award nominations.

For more information and for a full list of upcoming tour dates, visit www.ladyantebellum.com.