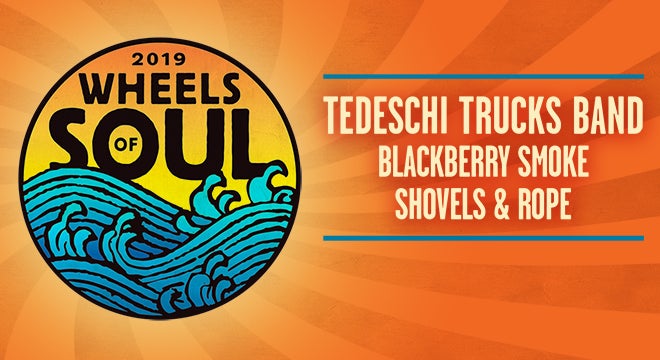 Tedeschi Trucks Band’s increasingly successful Wheels of Soul tour returns to the road in 2019, for one of the most anticipated concert events of the summer. Kicking-off June 29th in the Grammy-winning group’s hometown of Jacksonville, Florida, the 5th annual amphitheater run welcomes special guests Blackberry Smoke and Shovels & Rope, and will perform at Meadow Brook Amphitheatre on the campus of Oakland University on Tuesday, July 23 at 7 p.m.

Unrivaled in their blend of American soul, blues, rock and country, the 12-member Tedeschi Trucks Band, led by the husband and wife team of guitarist Derek Trucks and vocalist/guitarist Susan Tedeschi, has curated and cultivated this family-friendly experience into a highlight of the summer concert season.  Each year the band selects kindred artists to join their rolling caravan, turning each night into a unique collaborative event rather than simply a three-band bill. Attracting larger audiences each successive year and expanding to new markets, critics hail the Wheels of Soul tour as “nothing short of spectacular,” (Saratogian), celebrating the “life-affirming power of music played with passion, skill and artistry,” (St. Louis Post Dispatch).

“The motivation and, really, the fun of Wheels of Soul is that we get to bring that spirit of musical camaraderie to a summer crowd,” says Trucks. “Traveling, being outside, playing music with friends new and old. We love the limitless energy of this tour.”

2018’s edition featured unparalleled musicianship, plenty of onstage sit-ins with guests Drive-By Truckers and The Marcus King Band, and broke TTB’s own attendance records. The group’s ever-changing setlists highlighted their evolving repertoire of more than 75 songs, including new originals such as “High and Mighty,” and surprising debuts like Ray Charles’ “Night Time Is the Right Time,” Al Green’s “Yield Not To Temptation,” and Neil Young’s “Rockin’ in the Free World.” Fans can expect more unforgettable moments as Tedeschi Trucks Band is joined next summer by Blackberry Smoke and Shovels & Rope.

Celebrating in 2019 its 10th year as a group, Tedeschi Trucks Band carries a distinguished reputation earned from both audiences and critics as one of the premier live bands in the world. Led by “two of the best roots rock musicians of their generation” (NPR), TTB is recognized for their supreme musicianship and genre-defying ability to explore almost any musical territory. Beyond the road, the band is preparing the launch of a fourth studio album, which follows their recent Grammy®-nominated live album/film release, Live from the Fox Oakland (2017), and their last studio release, Let Me Get By (2016). The soon to be announced new album is set for an early 2019 release.

American rock band Blackberry Smoke – made up of Charlie Starr (vocals, guitar), Paul Jackson (guitar, vocals), Richard Turner (bass, vocals), Brit Turner(drums) and Brandon Still (keyboards) – has become known for a singular sound indebted to classic rock, blues, country and folk. Since their debut in 2004, the Atlanta-based band has independently released six full-length albums and toured relentlessly, building a strong and loyal community of fans. In 2018, they released a full-length album, Find A Light, and an accompaniment acoustic EP, The Southern Ground Sessions.

Shovels & Rope is an award-winning husband & wife duo, Michael Trent and Cary Ann Hearst, from Charleston, SC. Their signature blend of rock, country, punk and Americana has resonated with audiences and press worldwide, including numerous national TV appearances and critical acclaim. Having “earned a reputation as fine storytellers with a gift for vibrant character songs” (Entertainment Weekly), the festival favorite is currently readying the release of a new album, a follow up to 2016’s Little Seeds and 2017’s Busted Jukebox, Vol 2.