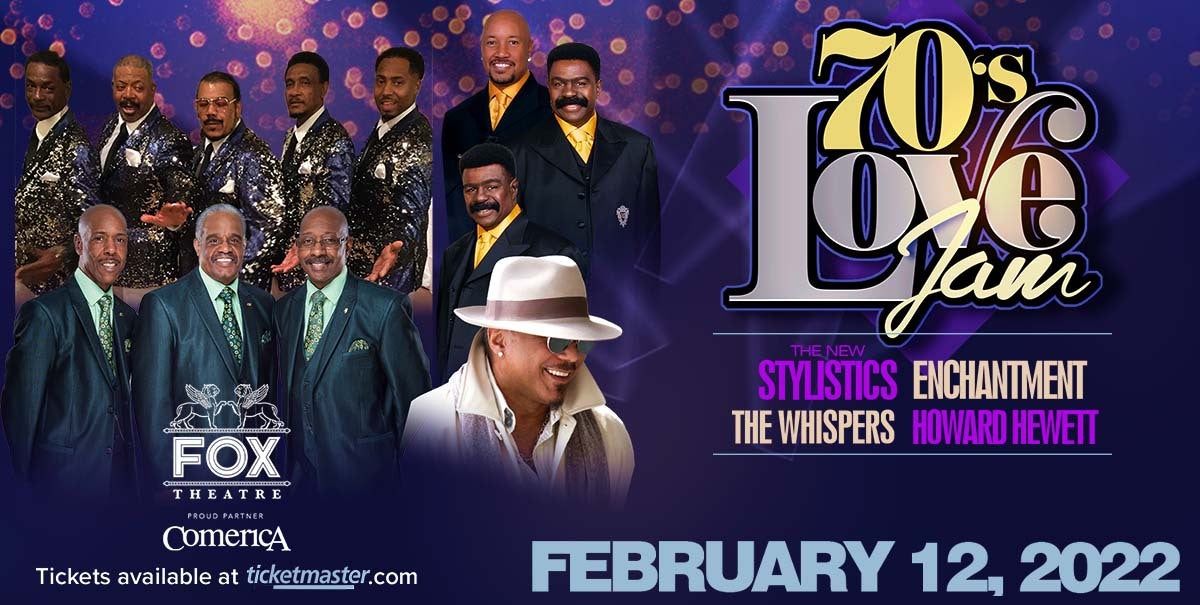 Fall in love all over again at the 70s Love Jam coming to Fox Theatre on Saturday, February 12 at 7 p.m. Featuring performances by R&B soul stars The New Stylistics, The Whispers, Enchantment and Howard Hewett, fans will have the chance to hear some of the greatest songs ever recorded, sung by the artists who made them famous. The 70’s Love Jam is presented by North American Entertainment Group Inc., one of the leading independent promoters of entertainment tours and live events in the United States. Comerica Bank is the exclusive presenting partner of the Fox Theatre.

ABOUT THE NEW STYLISTICS
The Stylistics were formed in Philadelphia, PA in 1966 from two groups, The Percussions and The Monarchs. When members from each group were drafted, the remaining members joined forces and changed their name to The Stylistics. Their first song, "You're a Big Girl Now" was recorded at Virtue Recording Studio in Philadelphia, written by their guitarist at the time, Robert "Doc" Douglas and Road Manager, Marty Bryant. Before long, the song became a #1 hit in Philadelphia, and then other cities followed. Hit veteran producer Tom Bell was hired to produce the group's first album titled The Stylistics, and out of that album came hit songs like "Stop, Look, Listen to your Heart", "You Are Everything" and "Betcha By Golly Wow." Herbert Murrell and Airrion Love are the remaining original members of The Stylistics. Friends since junior high school, Herb and Airrion have managed to keep the music alive. Their new lead singer, Grammy® Award winning recording artist, Barrington “Bo” Henderson, began his professional career with groups such as The Dramatics and Lakeside, and later he became the lead singer of world-renowned group, The Temptations. He was featured on The Temptations album Phoenix Rising, which nearly went double platinum. Bo was also on the album Ear-Resistible, helping to win The Temptations a Grammy® Award.

In the annals of R&B history, the Whispers have earned a solid and memorable position as one of the world’s longest-running vocals groups.  Celebrating over fifty years in the industry, they are the cream of soul, embellishing smooth ballads and upbeat dance favorites. They have had thirty-three top ten hits and twenty Billboard charted albums over a span of five decades. The Whispers began their legendary career in 1964 when they first organized at Jordan high school in Watts, producing a string of hits continuing over the last five decades such as “Seems Like I Gotta Do Wrong”, “And the Beat Goes On’, “Rock Steady”, “A Song For Donny”, and “Lady.” They emerged as the leading romantic singers of their generation, racking up one gold album after another and charting 46 Billboard hits. They are the first group to be signed to Soul Train Records and earned most of their greatest hits with Solar Records. The Whispers’ music has been sampled over 131 times and their music has been featured in over 600 musical compilations. Their music has been heard on movie soundtracks such as “Waiting to Exhale,” “Madea’s Family Reunion” and “Diary of a Mad Black Woman.” The group has not made any personnel changes since 1973 when Leaveil Degree replaced Gordy Harmon; they still consist of Walter Scott, Wallace Scott, and Leaveil Degree. The passing of Nicholas Caldwell in 2016 left them as a trio, but still stellar and powerful in their stage presence. They are one of only a few “old school” groups that can boast of having over 50 years in the industry with a worldwide fan base, maintaining their vocal dominance and original members.

Smooth and melodious soul group Enchantment formed in 1967 at Pershing High School in Detroit. Emanuel "E.J." Johnson, Joe Thomas, Dave Banks, Ed "Mickey" Clanton, and Bobby Green obtained their first recording contract by winning first place in a 1969 talent contest sponsored by local radio station WCHB. Enchantment became acquainted with their producer-to-be, Michael Stokes, in 1973 while performing at local nightclub Stage One. Through this union, they recorded music for the film Deliver Us from Evil. Its "Call on Me," a single recorded with Stokes, Paul Riser, and Jimmy Roach, was issued on Polydor in 1975. Enchantment later signed with the Roadshow label and recorded their self-titled debut album. The first single to hit the R&B chart from Enchantment (1977) was "Come On and Ride." Later that year, the charismatic showmen received national acclaim with their second single, "Gloria." Written and arranged by dynamic lead singer Johnson, the song reached number five on the R&B chart. The follow-up, "Sunshine," peaked even higher at number three. As they rode that momentum, album number two, Once Upon a Dream (1978), produced the pleading "It's You That I Need," a number one R&B hit that reigned for four weeks. After their third and final Roadshow album, Journey to the Land Of...Enchantment (1979), Enchantment's commercial success quickly faded. Soft Lights, Sweet Music (RCA, 1980), Enchanted Lady (Columbia, 1982), and Utopia (Columbia, 1983) nonetheless offered a crop of durable modern R&B cuts that included should-have-been hits like "I Can't Be the One" and "Here's Your Chance." Although they didn't record afterward, the group, still fronted by Johnson, continued to work as a performing act well into the 2010s.

Howard Hewett is one of the most gifted vocalists in the Post-Marvin Gaye era of pop R&B. Hewett got his mainstream break as the male vocal lead in Shalamar, a centerpiece of Dick Griffey’s SOLAR (Sound of Los Angeles Records) label. His tenor voice mixed beautifully with the bright vocals of Jody Watley, the dancing skills of Jeffery Daniels and the writing and production of Leon Sylvers III. The group gave the world feel-good dance favorites “The Second Time Around” and “A Night to Remember,” the baby-making classic “For the Lover in You,” as well as a number of beautiful B-side ballads like “You Can Count On Me” and “Somewhere There’s a Love.” When Watley and Daniels left the group in 1983, Hewett continued to lead Mickey Free and Delisa Davis in the reconstituted Shalamar. This version of the group was best known for soundtrack contributions on “Footloose” and “Beverly Hills Cop” with “Dancing in the Sheets” and the Grammy-winning “Don’t Get Stopped in Beverly Hills,” respectively. In the mid-eighties, Howard sets out on his solo career, releasing “I Commit to Love” in 1986 on Elektra and from the first single Hewett made magic, giving his amorous voice and whimsical lyrics to “Stay,” “I’m For Real” and the title track. Subsequent projects have solidified Hewett’s place in the high ranks of R&B balladeers by writing and collaborating and lending his voice within an intimate group of crooners, including George Duke, Quincy Jones, James Ingram, Anita Baker, Prince and Stanley Clarke. With Elektra, he released Forever and Ever (1988- Once, Twice, Three Times), Howard Hewett (1990- Show Me) and Allegiance (1992- Can We Try Again).