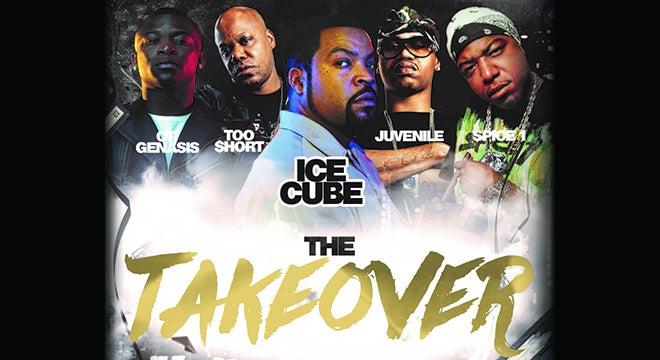 This will mark Ice Cube’s first time in Detroit since selling out Chene Park Amphitheatre in September 2016. His catalog includes #1 Billboard Hot Rap Songs “AmeriKKKa’s Most Wanted,” “It Was a Good Day,” “Check Yo Self” and “Pushin’ Weight.” In May, he became the first rap artist to ever play at the illustrious Sydney Opera House as he played two nights to sold out crowds in Sydney, Australia. His 10th studio album, Everythang’s Corrupt, is expected to be released later this year. Ice Cube also founded BIG3, the 3-on-3 pro basketball league that is set to visit Little Caesars Arena on Friday, July 13.

Too $hort, the godfather of Bay Area hip-hop, is backed by an incredible track record that spans over 30 years in the entertainment industry and includes 19 albums – 10 of which have earned gold and/or platinum plaques. Best known for hit rap songs, “The Ghetto” and “Blow the Whistle,” the Bay Area native released The Sex Tape Playlist in May. The 11-track album features guest appearances from Stressmatic, Philthy Rich, Mowii, Ymtk, Bandaide, Oke Junior and Sucheata Ivey, and is the prelude to his forthcoming Pimp Tape, which is supposed to drop this summer.

Juvenile has sold over 10 million albums worldwide, including the 4× Platinum 400 Degreez (1998) and Platinum albums Tha G-Code (1999) and Juve the Great (2003). His catalog of rap hits include the Gold certified singles “Back That Azz Up,” “Slow Motion” and “Rodeo.” His latest studio album, The Fundamentals, was released in 2014 and reached #25 on the Billboard Top Rap Albums chart.

Spice 1 also hails from the Bay Area in Hayward, California and was discovered by Too $hort. His first three studio albums – Spice 1 (1992), 187 He Wrote (1993) and AmeriKKKa’s Nightmare (1994) – were all certified Gold. The sophomore album 187 He Wrote topped the Billboard Top R&B/Hip-Hop Albums chart and reached #10 on the Billboard 200.

Tickets can be purchased at Little Caesars Arena XFINITY box office and Ticketmaster.com. To charge tickets by phone, call (800) 745-3000.