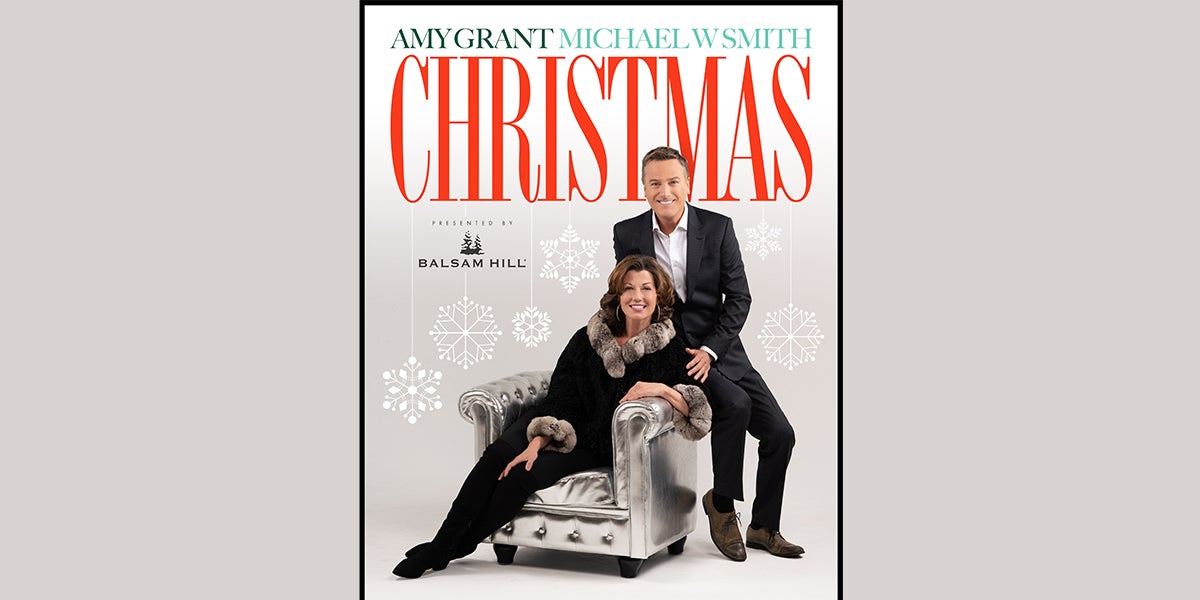 Christmas is about hope and we all need to be reminded of that right now,” says Grant. “Reuniting with Michael for a run of Christmas shows just feels right. We both love Christmas music and doing this tour together is one of my favorite things I get to do all year long.”

Smith adds, “This is my absolute favorite time of the year and I am so happy to be back on the road with my dear friend, Amy Grant. We’ve been doing this tour together for many years and it just never gets old. It is going to be something extra special this year.”

In addition to the performance, and in support of their longstanding relationship with Compassion International, Grant and Smith will be bringing awareness to their child sponsorship experience at each show.

For more information on the upcoming tour and to purchase tickets, visit: AmyGrant.com/Tour and MichaelWSmith.com/Tour.

Amy Grant's career spans more than 40 years and stretches from her roots in gospel into becoming an iconic pop star, songwriter, television personality and philanthropist. With three multi-platinum albums, six platinum albums and four gold albums, her total career album sales have exceeded 30 million and over one billion global streams. Grant’s chart success has been consistent throughout her career with six No. 1 hits, 10 Top 40 pop singles, 17 Top 40 Adult Contemporary tracks and multiple Contemporary Christian chart-toppers. In addition to her six Grammy® Awards, Grant has earned 26 Dove Awards (including four Artist of the Year Awards) and has been awarded a star on the Hollywood Walk of Fame as well as the Music City Walk of Fame and the Nashville Songwriter's Hall of Fame. Conventional wisdom has it that Grant put Contemporary Christian Music on the map becoming the first Contemporary Christian artist to have a platinum record, the first to hit No. 1 on the Pop charts and the first to perform at the GRAMMY® Awards. With that, her legacy as one of the most influential artists of the past four decades is assured. In April of 2016, Grant celebrated the 25th anniversary of her iconic hit “Baby Baby” with a worldwide release of the song featuring pop sensation Tori Kelly. Tennessee Christmas released in late 2016 and marked Grant’s first all-new holiday album in nearly 20 years. Last February, The T.J. Martell Foundation – the music industry’s leading nonprofit to fund innovative medical research focused on treatments and cures for cancer – honored Grant with the Tony Martell Outstanding Entertainment Achievement Award at their 2020 Honors Gala. 2021 finds Grant celebrating her iconic, 5x platinum album, Heart In Motion, releasing a double disc 35th Anniversary Edition that includes never before released tracks and updated remixes of the hit singles. For more information, visit www.amygrant.com.

Michael W. Smith has been releasing new music regularly and performing around the world to sold-out crowds for the last 35+ years. During his storied career, he's written and recorded over 36 No. 1 songs, been honored with three Grammy® Awards and 45 Dove Awards, one American Music Award, was inducted into the Gospel Music Hall of Fame and has sold more than 15 million albums. Amassing an in-depth catalog of achievements, Smith was also recently honored with a star-studded tribute concert in Nashville, TN to celebrate his 35 No. 1s, by a myriad of legendary performers. His recent USA Today, Yahoo! Music and Billboard-acclaimed studio album A Million Lights and Parade, Good Morning America-featured and GRAMMY nominated live worship album Surrounded have together become his 30th and 31st Top 10 hits on Billboard’s Top Christian Albums chart, more than any other solo artist in history. His most recent album STILL Vol. 1, is an atmospheric listening experience of improvisational music coupled with inspirational scriptures. More than just an outstanding songwriter and performer, Smith has given back to the global community throughout his career. Smith has raised funds to battle AIDS in Africa, started Rocketown, a safe haven for young people in Tennessee to meet and find hope; and has helped more than 70,000 children through Compassion International. He has also written several bestselling books, including Old Enough To Know and Friends Are Friends Forever. Michael W. Smith’s heavily praised Michael W. Smith & Friends: The Spirit of Christmas features collaborations with Vince Gill, Lady Antebellum, Little Big Town, Martina McBride, Carrie Underwood, Jennifer Nettles, Bono, Michael McDonald and Grant. For more information, visit www.michaelwsmith.com.

Select three of the incredible featured shows in the Fox Theatre Series presented by Comerica Bank lineup and save up to 20%! You will also enjoy several exclusive benefits.