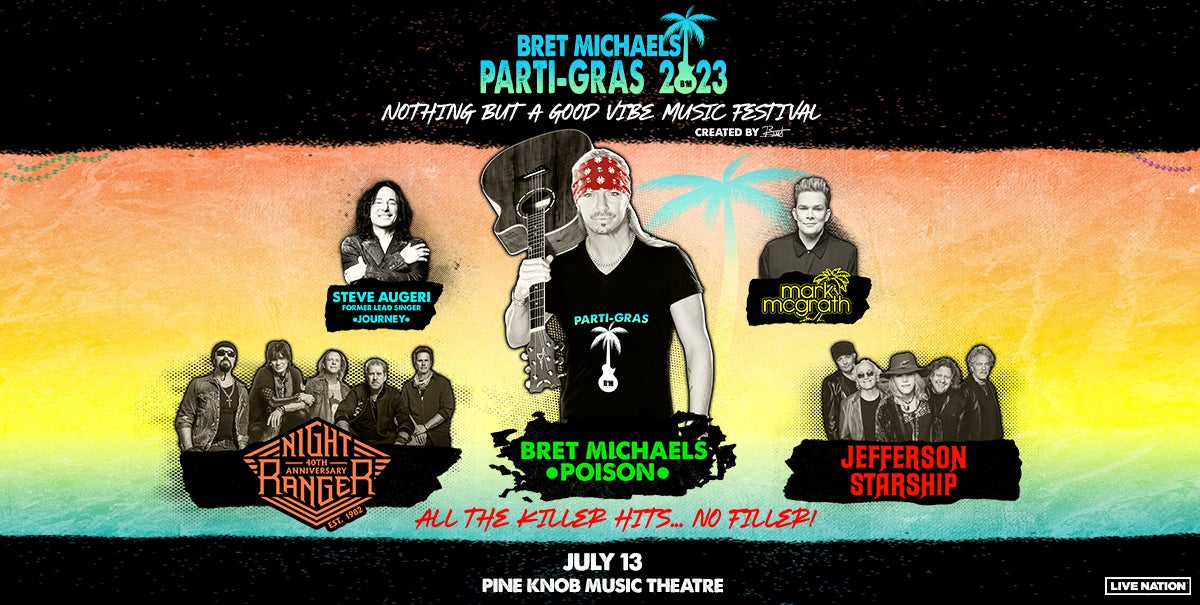 Hot off the heels of a massive stadium tour with his band Poison, for the first time ever, Bret Michaels is hitting the road for a limited run of live dates for his 2023 Parti Gras Tour. Michaels has created this tour with a Mardi Gras feel in celebration of his great fans and hit music. The renowned rockstar will bring a few of his rocker friends along for a mashup of all killer, no filler hits featuring special guests Night Ranger and Jefferson Starship with special appearances from Steve Augeri (former lead singer of Journey) and Mark McGrath (Sugar Ray), plus a nightly surprise guest to rock your world. 94.7 WCSX presents the tour’s opening date at the one and only Pine Knob Music Theatre, known for its epic concerts and parties, on Thursday, July 13 at 7 p.m. Pine Knob Music Theatre is presented by Proud Partners United Wholesale Mortgage, Trinity Health and Ally.

Presented by Live Nation, the 12-city limited date run will make stops across the U.S. including at The Pavilion at Star Lake, in his birthplace of Pittsburgh (PA), Holmdel (NJ), Tinley Park (IL), Tampa (FL), and more before wrapping up in Charlotte (NC) at PNC Music Pavilion on August 6. The tour promises to be a modern day throwback to epic tailgate parties, positive energy, and a much needed nothing but a good vibe.

“After seeing Bret bring the party in every market of The Stadium Tour, this past year, we are looking forward to more of his ‘nothing, but a good vibe, high-energy performing’ on The Parti-Gras Tour next summer,” said Rick Franks, Global Touring Live Nation.

Michaels states, “I created Parti-Gras as a sincere and grateful thank you to the fans, friends, and family who have rocked with me over the years.  I promise to deliver positive energy, live, raw, real music, and all the bands will deliver sing-a-long hit after hit songs. Your voice will be hoarse after an epic, big, fun stage show.”

Known as an avid philanthropist who always honors veterans and hometown heroes on stage and the son of a veteran and life-long type 1 diabetic, Michaels is thrilled to be part of the upcoming TV special, “Homes for the Holidays.” in partnership with the Tunnel To Towers Foundation. The foundation has invited celebrity friends to give Gold Star and fallen first responder families the ultimate holiday gift: mortgage-free homes. Homes for the Holidays will air from Thanksgiving weekend through New Year's Day across multiple network affiliates, including Fox, Scripps, and Gray stations. It will also air on The Circle Network and AXS TV. Check local listings to see when it airs in your area.