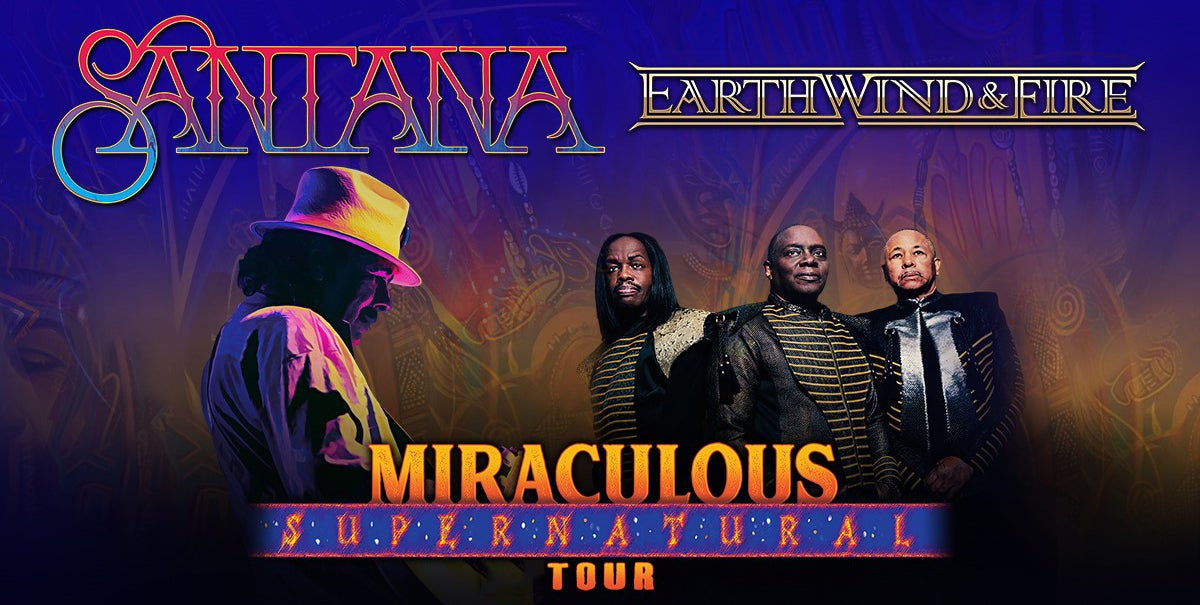 Grammy® Award-winning, legendary artists Carlos Santana and Earth, Wind & Fire will embark on a North American tour, expected to be the hottest ticket this summer. A continuation of 2019’s “Supernatural Now” tour for Santana, the “Miraculous Supernatural 2020 Tour” will mark the first time that these two powerhouses will share the stage in the U.S.

Santana, and his band (which also features Santana’s wife, Cindy Blackman Santana) will highlight songs from both his Supernatural and Woodstock eras, as well as newer tracks from his 2019 full-length album Africa Speaks and some incredible surprises. Earth, Wind & Fire is one of music’s most celebrated musical forces in history with an iconic music catalogue that has been the soundtrack of millions of lives around the world.

“It is a great joy and honor to co-share music with the magnificent elements of Earth, Wind & Fire. We look forward to delight, joy and ecstasy!” says Santana. “I feel like a 20 year old on stage playing with my band, and they deliver incredible energy on every song. When we hit the stage, we know we will touch your heart and make you dance, sing, cry, laugh and leave your worries and fears behind. The shows will feature the hits of yesterday, today and tomorrow…with energy!”

“We are excited to rock the USA alongside our friend Carlos Santana and his band with their off-the-chart musicianship and high energy show,” said EWF lead vocalist Philip Bailey. “We‘re going to bring the mighty elements of the universe to the stage and take fans on a journey they’ll never forget. This is gonna be a blast!”

This past year, Santana celebrated the 20th anniversary of his revolutionary, multiple Grammy® Award-wining album Supernatural, along with the 50th anniversary of his Woodstock performance. Santana’s 1999 album Supernatural featured the back-to-back #1 singles “Smooth” and “Maria Maria” and sold over 30 million copies worldwide, topping the charts in over a dozen countries and sweeping the 2000 Grammy® Awards.

Earth, Wind & Fire was the first African American R&B group to receive the prestigious Kennedy Center Honor in 2019. Philip Bailey, Verdine White and Ralph Johnson continue the legacy of the band with career achievements that include nine Grammys®, one being a Grammy® Lifetime Achievement Award, and they were inducted into the Rock and Roll Hall of Fame in 2016. EWF’s music catalogue of singles and albums have tallied hundreds of millions of streams and sales worldwide and forever changed the history of music.

Coming off the celebration of two epic milestones in 2019 – the 20th anniversary of his groundbreaking album Supernatural and the 50th anniversary of his legendary performance at Woodstock – Carlos Santana now looks to 2020 and the celebration of the 50th anniversary of his masterpiece Abraxas. To date, Santana has won 10 Grammy® Awards and three Latin Grammys®, with a record-tying nine Grammys® for a single project for 1999’s Supernatural (including Album of the Year and Record of the Year for “Smooth”). He has received the Billboard Century Award (1996), was ushered into the Rock and Roll Hall of Fame (1998), received the Billboard Latin Music Awards’ Lifetime Achievement honor (2009), and was the recipient of the Kennedy Center Honors Award (2013). Among many other distinctions, Carlos Santana has been cited by Rolling Stone as #15 on their list of the “100 Greatest Guitarists of All Time;” and has joined the Rolling Stones as one of only two bands to have an album reach the Top 10 in every decade since the 1960s. In 2018, he released his first MasterClass. In it he teaches the art, heart, and soul of guitar, reaching deep into the spirituality and tonality of his playing to help students become more authentic and expressive artists. In June of 2019, inspired by the sounds and rhythms of Africa, Santana released the powerful, energy-infused full-length album Africa Speaks, which NPR called his “best record in decades” and The New York Times ranked among “the fiercest albums in Santana’s 50-year career.” Santana is currently headlining a multi-year residency at House of Blues at Mandalay Bay Resort and Casino in Las Vegas.

Earth, Wind & Fire are a music institution. In their five-decade history, principal members Philip Bailey, Ralph Johnson and Verdine White have performed sold out concerts all around the world, scored eight number one hits and have sold over 100 million albums. Their legacy includes an impressive nine Grammy® Awards, including one for Lifetime Achievement, an induction into the Rock and Roll Hall of Fame and the prestigious Kennedy Center Honor, celebrating their contributions to the world of arts and humanity. With a sound that blends funk, jazz, pop, and soul, Earth, Wind & Fire's artistry has influenced musical giants, such as Michael Jackson, Stevie Wonder and Prince, and they continue to create music that will forever reach a sacred universal atmosphere.