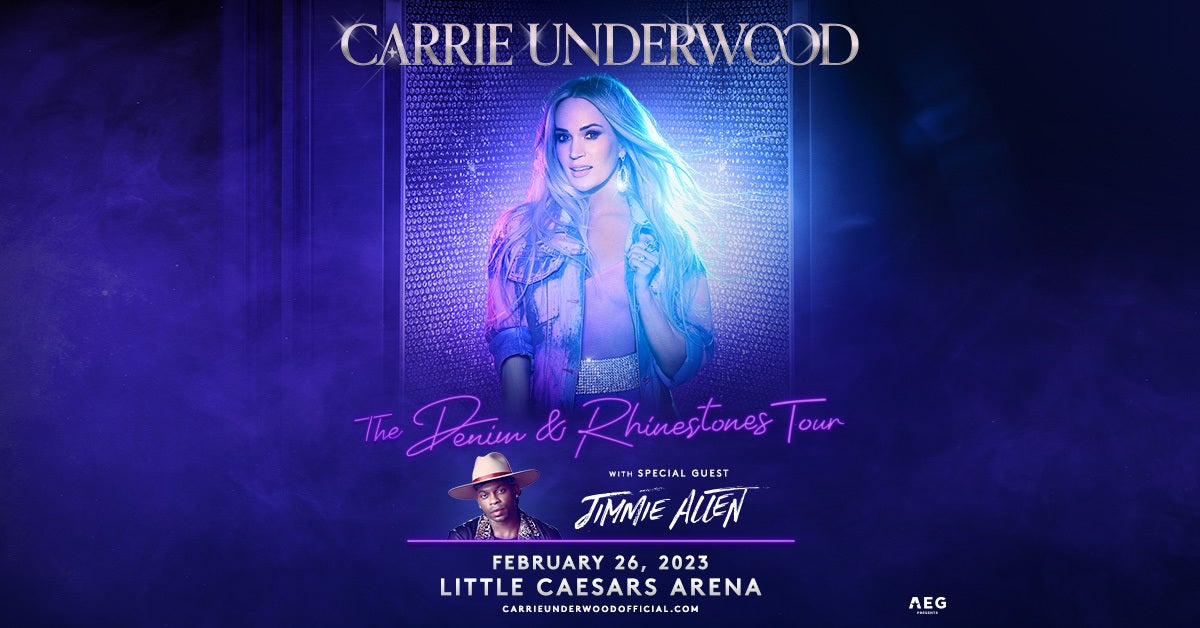 On the heels of her triumphant headlining return to the iconic Stagecoach Festival, eight-time Grammy® Award winner and three-time ACM Entertainer of the Year, Carrie Underwood, announces her new arena tour, “The Denim & Rhinestones Tour,” with a date at Little Caesars Arena on Sunday, February 26, 2023 at 7:30 p.m. Underwood will be joined on “The Denim & Rhinestones Tour” by special guest Jimmie Allen on all dates.

The new tour, promoted by AEG Presents, will kick off on October 15 in Greenville, SC, making stops in 43 U.S. cities including New York’s Madison Square Garden, Nashville’s Bridgestone Arena, and L.A.’s Crypto.com Arena before concluding in Seattle, WA on March 17. After teasing fans about the impending announcement on social media and on last night’s episode of American Idol, Underwood made the official reveal this morning.

Allen will join Underwood’s “The Denim & Rhinestones Tour” as his star continues to rise, following his first Grammy® Award nomination for Best New Artist in 2022 and CMA and ACM Award wins for New Artist of the Year & New Male Artist of the Year, respectively, in 2021. His third album Tulip Drive will be released June 24.

“I’m thrilled to be hitting the road again with “The Denim & Rhinestones Tour,” says Underwood. “I’m having such an amazing time with my Las Vegas residency and look forward to continuing that next year after the tour. I’m excited to bring the new music of Denim & Rhinestones to life on tour, as well as put new spins on familiar favorites. We’ve been working hard already preparing an amazing show, and I can’t wait to see everyone on the road!”

Since early in her career, Underwood has designated a portion of ticket sales from her tours to support worthwhile charities and organizations. She continues that tradition by arranging for a donation of $1 from each ticket sold for “The Denim & Rhinestones Tour” to be contributed to the Tunnel to Towers Foundation (t2t.org), which has been helping America’s heroes since 9/11 by providing mortgage-free homes to Gold Star and fallen first responder families with young children and by building custom-designed smart homes for catastrophically injured veterans and first responders. The Foundation is also committed to eradicating veteran homelessness and aiding the victims of major U.S. disasters.

Underwood will release her highly-anticipated album, Denim & Rhinestones, on June 10. The album is her latest collaboration with David Garcia, with Garcia and Underwood having co-produced her critically-acclaimed 2018 release, Cry Pretty, which marked the first time Underwood produced her own album.  Garcia and Underwood also co-produced Underwood’s 2021 Grammy® Award-winning album of gospel hymns, My Savior. The lead single from the new upcoming album, “Ghost Story,” is currently climbing the charts and has garnered over 30M global streams. The song’s cinematic music video, directed by acclaimed director and photographer Randee St. Nicholas, is available now (Watch Here).

The Denim & Rhinestones Signed CD Box Set and Vinyl Box Sets are available for preorder now, which include an exclusive t-shirt, rhinestone pack, denim tote bag, and album slip mat in limited quantities here. Fans can order from physical retailers here. The vinyl edition will be available in July and a cassette version on August 5.

2022 dates for Underwood’s ongoing REFLECTION: The Las Vegas Residency at the Resorts World Theatre continue through May 21. The first artist to grace the largest and tallest stage in Las Vegas, Underwood opened the new 5,000-capacity, world-class theatre with a sold-out engagement in December 2021, followed by sold-out runs in March and April 2022. 2023 dates for REFLECTION will be announced at a later date.

Underwood’s most recent arena tour, “The Cry Pretty Tour 360,” ran in 2019, closing out in the #1 spot on Pollstar’s LIVE75 chart (11/04/19), which ranks worldwide active tours by average tickets sold.  Also in 2019, Underwood performed her UK arena tour, “The Cry Pretty Tour UK,” which brought her dynamic production and signature vocal prowess to thousands of fans throughout England, Wales and Scotland with five arena shows.

Carrie Underwood is a true multi-format, multi-media superstar, spanning achievements in music, television, film, and as a New York Times bestselling author and successful entrepreneur. She has sold more than 66 million records worldwide, recorded 28 #1 singles (14 of which she co-wrote), and has seven albums that are certified Platinum or Multi-Platinum by the RIAA, all while continuing to sell out arena tours across North America and the UK.  All nine of her consecutive album releases (two of which she co-produced) from the beginning of her career debuted #1 on the Billboard Country Chart, making her the only artist to accomplish that feat. She has won over 100 major awards including eight Grammy® Awards, 16 ACM Awards including three for Entertainer of the Year (the first female in history to win twice and the only female ever to win three times), 25 CMT Music Awards (holding the record for the most award wins ever for the show), seven CMA Awards, and 17 American Music Awards. She has also built a successful business portfolio inspired by her passion for health and wellness.  She founded and created the fitness and lifestyle brand, CALIA by Carrie Underwood and her first book, Find Your Path was an instant New York Times bestseller. She launched her fit52 app in 2020, and expanded her lifestyle portfolio with an equity partnership with BODYARMOR Sports Drink in 2021. She was the first artist to perform at the new Resorts World Theatre, where her ongoing REFLECTION: The Las Vegas Residency, began with a sold-out debut run in December 2021 and continues this Spring. She will release her highly-anticipated album, Denim & Rhinestones, on June 10, 2022, which she co-produced with David Garcia, and the first single from the album, “Ghost Story” is climbing the charts.

Signed to BBR Music Group’s Stoney Creek Records, multi-platinum recording artist and songwriter Jimmie Allen has been blazing trails since the beginning of his breakout career. Allen was nominated for Best New Artist at the 64th Annual Grammy® Awards in April 2022, his first ever Grammy® nomination. He was also nominated for Male Artist of the Year nominee at the 57th ACM Awards (which he co-hosted alongside Dolly Parton & Gabby Barrett) and Outstanding New Artist nominee at the 53rd NAACP Image Awards. Allen launched his career with two consecutive No. 1 hits off his 2018 debut album Mercury Lane. In July 2020, Allen released his star-studded collaboration project Bettie James, named for his late grandmother, Bettie Snead, and late father, James Allen. On June 25, 2021, Allen released the project’s follow up album Bettie James Gold Edition. Doubling down on Allen’s expansive love for music across genres, the album “broadens country’s borders” (Billboard) and includes nine brand new songs featuring Babyface, BRELAND, Keith Urban, LANCO, Lathan Warlick, Lindsay Ell, Little Big Town, LOCASH, Monica, Neon Union, Pitbull, teamwork. and Vikina in addition to the previous collaborations on Bettie James with Brad Paisley, Charley Pride, Darius Rucker, Mickey Guyton, Nelly, Noah Cyrus, The Oak Ridge Boys, Rita Wilson, Tauren Wells and Tim McGraw. Allen won the both the ACM New Male Artist of the Year award and CMA New Artist of the Year award in April and November 2021, respectively. He has amassed more than one billion on-demand streams and performed on The Kennedy Center Honors, Dick Clark’s Rockin’ New Year’s Eve, Jimmy Kimmel Live!, Good Morning America, TODAY, American Idol, Tamron Hall Show, Nick Cannon, The Steve Harvey Show, ACM Awards, CMA Awards, CMT Music Awards, Macy’s Thanksgiving Day Parade and more. Much like his approach to music, Allen’s other creative pursuits know no boundaries. His debut picture book, My Voice Is a Trumpet was published on July 13, 2021 with Flamingo Books, an imprint of Penguin Young Readers, and he reached the quarterfinals as a contestant on Dancing With the Stars on its landmark 30th season. His new single “Down Home” was released March 8. The song is the first single from Allen’s upcoming third album Tulip Drive, which will be released June 24, 2022. For more information on Allen, visit www.jimmieallenmusic.com or follow him on Instagram, Twitter and Facebook.