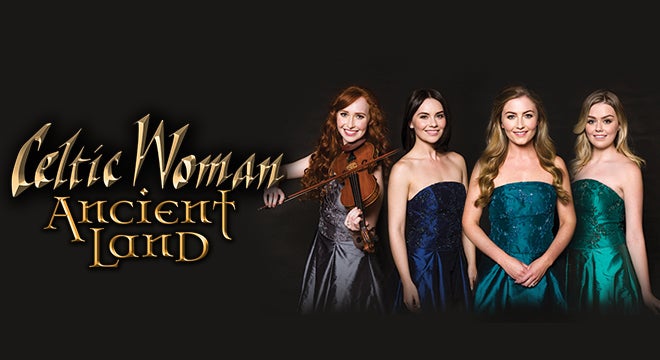 Celtic Woman, the Grammy®-nominated, multi-platinum international music group today announced its return to North America with a brand new live show, Ancient Land. The tour announcement comes on the heels of the release of the 13th studio album of the same name. Celtic Woman will visit nearly 70 North American cities in 2019 including Detroit’s Fox Theatre on Wednesday, April 10 at 7 p.m.

Ancient Land is the next chapter of Celtic Woman’s extraordinary musical journey as the group continues to touch the hearts of a huge global audience with the centuries-old Irish tradition of telling stories through song: stories of the land, stories of love and stories of dancing -- songs that will bring a piece of Ireland to audiences everywhere. A brand-new concert spectacular will air on PBS stations this fall (check local listings for airdates).  Filmed against the backdrop of the historic Johnstown Castle in County Wexford, Ireland, the outdoor concert special features brand new music from Ancient Land, timeless Irish favorites and unexpected cover songs.

Continuing the remarkable legacy of introducing some of Ireland’s most talented singers and musicians onto the world stage, Celtic Woman features the angelic voices of Megan Walsh, Mairéad Carlin, Éabha McMahon and the breathtaking Celtic violinist Tara McNeill, accompanied by a full ensemble of musicians and dancers. Celtic Woman celebrates Ireland’s rich musical and cultural heritage and combines the finest musical talent with epic stage productions to present a unique, inspiring live experience.

Recorded in Real World Studios in the UK this past summer, Ancient Land is the thirteenth studio album featuring all new material for Celtic Woman including original compositions “Follow Me,” “Be Still” and “Love & Honour” (instrumental), Irish traditional songs “Sive,” “Mná na hÉireann (Women of Ireland)” and "Moorlough Shore” and some reimagined workings of contemporary songs “Long Journey Home,” “Going Home” and “Homeland.”

For the complete tour schedule and ticket information, visit celticwoman.com/tour-dates. Sign up for Celtic Woman’s newsletters at celticwoman.com to be informed of future tour dates, album releases and special offers.

Tickets can be purchased at the Fox Theatre and Little Caesars Arena XFINITY box offices and Ticketmaster.com.