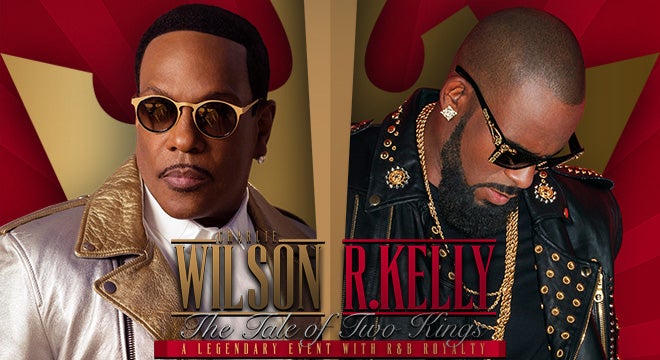 105.9 KISS-FM will celebrate love and music history as Charlie Wilson and R. Kelly, two of the greatest male voices in soul music history, come together to bring all of their hits and hysteria with “The Tale of Two Kings” to Little Caesars Arena on Wednesday, February 21 at 7:30 p.m.

Charlie Wilson signed to Jive (now RCA) in 2004 after landing his first No. 1 Billboard Adult R&B hit in 2000, “Without You.” Since then, he’s released six solo albums and become a consistent chart presence. His tally of 19 hits boasts seven more Adult R&B No. 1s. Among them: “My Love Is All I Have,” “You Are” and “There Goes My Baby.” While garnering eight No. 1 singles, 11 Grammy nominations and other industry accolades, including BET’s 2013 Lifetime Achievement Award, Wilson has stayed busy on the road, as he is a major concert draw, claiming the crown for top winter tour of 2015 with his Forever Charlie arena tour.

Wilson’s latest album, In It to Win It was released on February 17. The set boasts lead single “I’m Blessed” featuring T.I., the fastest rising top 10 single this year on the Billboard Urban Adult Contemporary chart.

Lauded as an R&B legend, R. Kelly is one of the most successful artists of all time with over 40 million albums sold worldwide, three Grammy Awards, six American Music Awards, six Billboard Awards, and eight Soul Train Awards. His chart-topping hits range from “Bump N’ Grind” and “Your Body’s Callin” to Grammy Award winning “I Believe I Can Fly” and everything in between. With a music career spanning over 25 years, R. Kelly has proven time and time again he’s the “King of R&B.”

Lineup is subect to change.