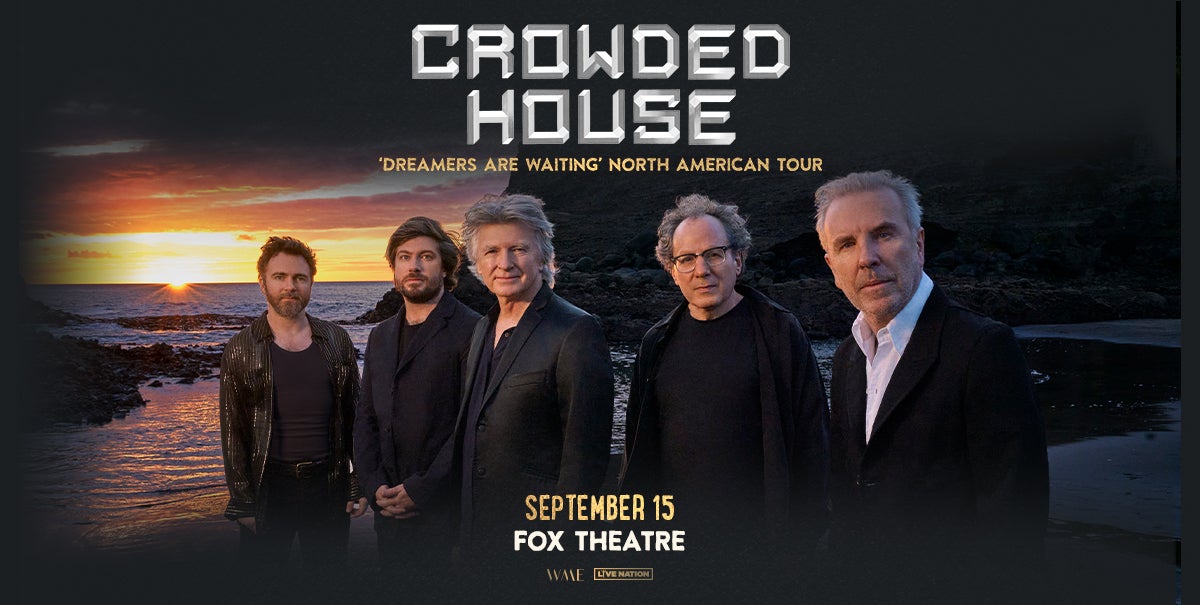 Iconic multi-platinum selling band Crowded House has officially announced their highly anticipated North American tour to include a stop at the Fox Theatre on Thursday, September 15 at 7:30 p.m. Comerica Bank is the exclusive presenting partner of the Fox Theatre.

The North American tour announcement follows on the heels of sold-out Australian and European legs of the tour along with their seventh studio album Dreamers Are Waiting. Listen to the album here. The new music as well as the tour features founding members Neil Finn and Nick Seymour along with producer and keyboardist Mitchell Froom, guitarist and singer Liam Finn and drummer Elroy Finn.

“Crowded House are delighted at long last to be able to play shows in North America. We have been picking up the pace recently as the world opens up and can’t wait present the show with this band lineup in absolute top form to the good folk of North America, from sea to shining sea,” said Neil Finn.

Crowded House is a long standing and much-loved vehicle for the song writing talents of Neil Finn. Formed in Melbourne Australia in 1985 out the ashes of New Zealand’s Split Enz by Neil, Paul Hester and Nick Seymour, their eponymous self-titled debut album on Capitol Records went on to global success with the hits “Don’t Dream It’s Over” and “Something So Strong”. Those songs and many that followed are still resonating with audiences today, the former being one of the most covered songs of the last 20 years. The band’s first incarnation lasted from 1985 through 1996 with four studio albums and enjoyed much success worldwide, becoming particularly beloved for their freewheeling and interactive live shows. This lineup said Farewell to the World on the steps of the Sydney Opera House in 1996 with a now legendary performance in front of 150,000 people.

In 2007 following the tragic death of Paul Hester, Neil and Nick felt emotionally compelled to bring Crowded House back, to put some more good history, as they described it, into the story of the band. Drafting in new drummer Matt Sherrod and with long time touring member Mark Hart they released the album Time On Earth to critical acclaim and toured the world. Another album, Intriguer, was recorded in 2009 and Crowded House was inducted into the ARIA Hall of Fame in 2016, at the same time reprising its Farewell shows at the Sydney Opera House with four nights of stunning performances.