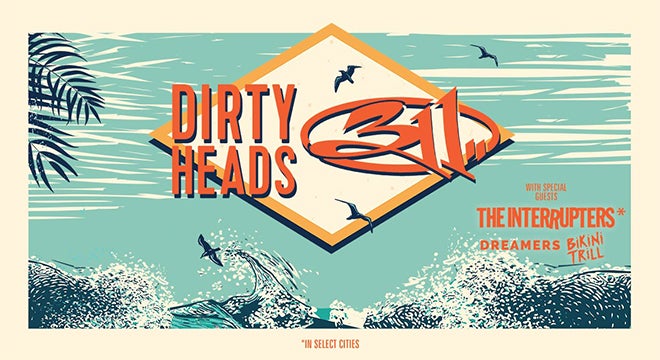 Dirty Heads and 311 will join forces to bring their hybrid alternative sound and good vibes to amphitheaters nationwide this summer. Special guests The Interrupters will join, with their top #3 alternative hit single “She’s Kerosene.” Destined to be a great night of alt rock / reggae / and hip-hop stylings, the 29-date tour, produced by Live Nation, will stop at DTE Energy Music Theatre on Friday, July 5 at 5:45 p.m. Dreamers and Bikini Trill will also join the tour as support.

Dirty Heads and 311 have partnered with PLUS1 so that $1 from every ticket will go to organizations bringing dignity, equity, and access to communities who need it. www.plus1.org.

311 was formed in 1990 in Omaha, Nebraska by singer/guitarist Nick Hexum, singer S.A. Martinez, guitarist Tim Mahoney, drummer Chad Sexton and bassist P-Nut.  The band now resides in Southern California. 311 mix rock, rap, reggae and funk into their own unique hybrid sound - and have developed a reputation as one of the most entertaining & dynamic live bands in the U.S. 2019 will mark 20 consecutive summers for 311 to headline the US. 311’s celebratory live shows & incessant touring schedule have earned them a massive grassroots following nationwide. 311 have so far released 12 studio albums, selling over nine million albums in the U.S. alone. Their last 10 consecutive albums reached the Top 10 on the Billboard Top 200 Album Charts and they’ve had nine Top 10 radio hits, including three #1’s. Their list of hits includes “Down,” “All Mixed Up,” “Amber,” “Love Song,” “Come Original,” “Beautiful Disaster,” “Don’t Tread on Me,” “Hey You” and “Sunset in July.” The band’s 12th and latest album Mosaic came out June 2017, debuting #6 on Billboard's Top 200 Album Chart. 311 are planning to release their 13th album (title tba) in Summer 2019 via BMG. The new album pre-order launches today at 311.com. Tonight (March 11, 311 Day), both band and fans will celebrate 311’s feature film Enlarged to Show Detail 3  in 240 cinemas nationwide, more info at 311inCinemas.com.

Dirty Heads have been redefining the sound of Southern California since 2003. With over 700 Million streams to date, the group has been inhaling alternative, hip-hop, reggae and rock and exhaling one irresistible, infectious anthem after another. They have released 6 studio albums, and have had 8 Top 20 hits including their RIAA gold-certified smash “Lay Me Down,” “My Sweet Summer,” “That’s All I Need,” “Celebrate,” “Vacation,” and their most recent release “Visions.” Over their 16-year career they have built a network of devoted fans through their relentless touring schedule and innovative approach to merch and partnerships, including helping to raise over $98,000 for NRDC and The David Suzuki Foundation in 2018. The band is hitting the road in April with The Hip Reduction and will embark on a 29-date Summer tour, kicking off with the sold-out Warped Tour’s 25th Anniversary show series in Atlantic City, NJ on June 29th.