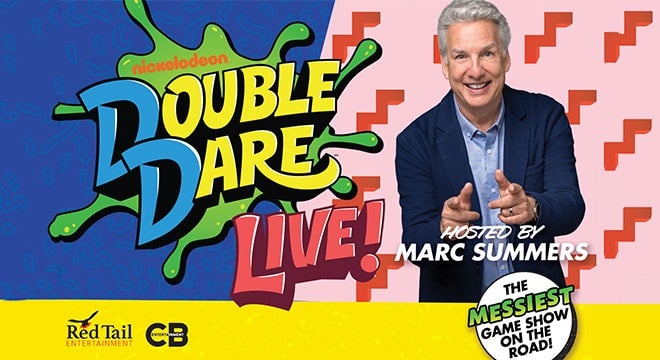 The highly anticipated return of the Double Dare series premiered summer 2018 on Nickelodeon, and ranked as the year’s number-one new kids show with Kids 6-11, while retaining the core adult audience who grew up with the original television show. The new Double Dare is hosted by digital creator and actress Liza Koshy, with original host Marc Summers providing color commentary on the challenges and lending his vast knowledge of the game and expertise to each episode.

“Hosting the Double Dare Live tour couldn’t be any more exciting, and I look forward to continuing to bring the fun and messiness of Double Dare to audiences across the country,” said Marc Summers. “Doing the show again with my sidekick Robin will fulfill childhood dreams of the generation that grew up with us and introduce this classic show to the next generation.”

Double Dare premiered on Oct. 6, 1986, on Nickelodeon, and ran from 1986-1993, making it the network’s longest running game show. Marc Summers served as the show’s original host from 1986-1993. Shortly after its debut, Double Dare became one of the most popular original daily programs on cable television. The series went into syndication in 1988 and was later revived as Super Sloppy Double Dare in 1989.  The show also ran on broadcast television as Family Double Dare in 1988, followed by new versions on Nick, including Double Dare 2000.

When you've read, completed and signed the Waiver Form, hit "Submit" and it will be entered into the database for each city.

Be A Contestant Waiver

When you arrive at the venue, go to the Registration Table to verify that you've completed Official Rules and Waiver form, and present a valid photo ID and you and any family members that you registered will be given a wrist band which indicates to the show staff that you are eligible to be chosen as a contestant on stage.