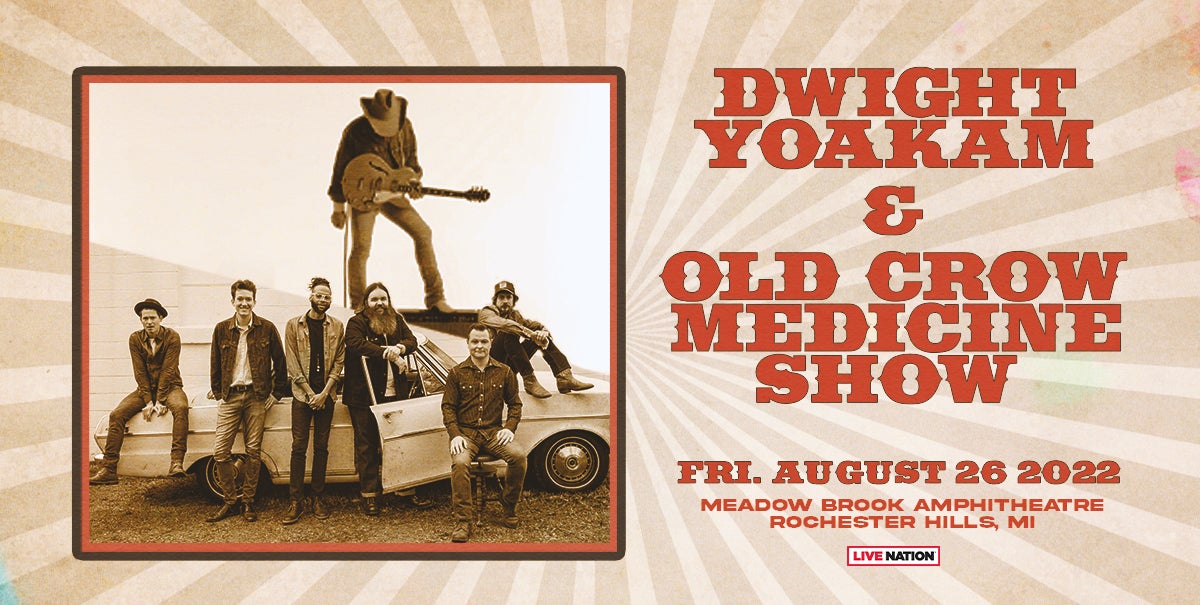 Grammy®-winning artists and entertainment icons Dwight Yoakam and Old Crow Medicine Show have announced a co-headlining tour with a stop at Meadow Brook Amphitheatre on the campus of Oakland University on Friday, August 26 at 8 p.m.

Dwight Yoakam has sold more than 25 million albums worldwide, and he is a 21-time nominated, multiple Grammy® Award winner. He has 12 gold albums and 9 platinum or multi-platinum albums, with five of those albums topping Billboard’s Country Albums chart and another 14 landing in the Top 10. Nearly 40 of Yoakam’s singles have charted on Billboard, with 14 peaking in the Top 10. Yoakam is a recipient of the Artist of the Year award from the Americana Music Association, the most prestigious award offered by the organization. He was inducted into the Nashville Songwriters Hall of Fame in the Songwriter/Artist category at the 49th anniversary Gala in 2019.

In 2016, Yoakam released his bluegrass album Swimmin’ Pools, Movie Stars… on Sugar Hill Records. Featuring a band of bluegrass luminaries, this album boasts a collection of reinterpreted favorites from his catalogue, as well as a cover of Prince’s “Purple Rain”. Produced by nine-time GRAMMY winner Gary Paczosa (Alison Krauss, Dolly Parton), Jon Randall (songwriter of “Whiskey Lullaby”), and Yoakam himself, and mixed by Chris Lord-Alge, this album reflects the love for bluegrass music that Yoakam developed at an early age in Kentucky and that has inspired him for many years thereafter.  In 2018, Yoakam released two songs, “Pretty Horses” and “Then Came Monday” (the latter written with Chris Stapleton).

On their whirlwind new album Paint This Town, Old Crow Medicine Show offer up a riveting glimpse into American mythology and the wildly colorful characters who populate it. The most incisive body of work yet from the Nashville-based roots band—a two-time Grammy Award-winning juggernaut whose triumphs include induction into the Grand Ole Opry and double-platinum certification for their iconic hit single “Wagon Wheel”—the album pays homage to everyone from Elvis Presley to Eudora Welty while shedding a bright light on the darker aspects of the country’s legacy. Fueled by Old Crow’s freewheeling collision of Americana, old-time music, folk, and rock & roll, Paint This Town relentlessly pulls off the rare and essential feat of turning razor-sharp commentary into the kind of songs that inspire rapturous singing along.

In a major milestone for Old Crow, Paint This Town marks the first album created in their own Hartland Studio: an East Nashville spot the band acquired in early 2020 then transformed into a clubhouse-like space custom-built to suit their distinct sensibilities. “Over the years we’ve spent a lot of time and money in professional studios, but this was the first time we’d worked in our own place since back in the late ’90s, when we’d hang a microphone from the rafters and record a cassette on our TASCAM 4-track,” says frontman Ketch Secor. Co-produced by the band and Matt Ross-Spang (a producer/engineer/mixer who’s worked with the likes of John Prine and Jason Isbell), Paint This Town also took shape from a far more insular process than their past work with such producers as Don Was and Dave Cobb (who helmed Old Crow’s most recent effort, 2018’s widely acclaimed Volunteer). Not only instrumental in allowing the band a whole new level of creative freedom, that self-contained approach helped to revive a certain spirit of pure abandon. “Doing it ourselves was a lot more fun with a lot less stress or pressure, and because of that we were way less precious about it,” says Secor. “It all just felt less like a chore and more like a complete joy.”

The seventh studio album from Old Crow, Paint This Town opens on its title track: a raucously swinging anthem that fully embodies that joyful energy. With its fable-like account of the band’s carefree troublemaking over the last two decades, the track showcases Secor’s uncanny knack for packing so much detailed storytelling into a single line (e.g., “We were teenage troubadours hopping on box cars for a hell of a one-way ride”). “Our band has always drawn its inspiration from those elemental American places, where water towers profess town names, where the Waffle House and the gas station are the only spots to gather,” says Secor. “This is the scenery for folk music in the 21st century, and the John Henrys and Casey Joneses of today are the youth who rise up out of these aged burgs undeterred, undefeated, and still kicking.”

Although much of Paint This Town looks outward to examine the American experiment, Old Crow never shy away from the intensely personal. Written soon after the demise of Secor’s marriage, “Bombs Away” puts a devil-may-care twist on the classic divorce song, while the gently galloping “Reasons to Run” invokes the Lone Ranger in confessing to the emotional toll of too much time on the road. And on tracks like “Used to Be a Mountain,” Old Crow turn their lived experience into a lens for illuminating larger-scale problems affecting the modern world. “I spent about 25 years of my life very close to the region of Appalachia where strip-mining occurs, which is really dangerous work and destructive for all living things,” says Secor of the song’s origins. Partly informed by his memories of hitchhiking around coal country as a teenager, “Used to Be a Mountain” emerges as a galvanizing meditation on environmental catastrophe, boldly propelled by Secor’s frenetic vocal flow and firebrand poetry (“From the fat cats, race rats, big Pharma, tall stacks/They’re the ones digging the hole/All the way down to Guangzhou”).

In one of the album’s most potent segments, Paint This Town delivers a trio of songs that delve into matters of race and hate and systems of power, embedding each track with Old Crow’s vision for a more harmonious future. On “DeFord Rides Again,” for instance, the band serves up a gloriously stomping tribute to legendary harmonica player DeFord Bailey (the first Black star of the Grand Ole Opry, who was eventually banned from the show and left in exile). “One of the things that inspired that song was the experiences we’ve had traveling all over the world and seeing the people who take country music into their hearts,” says Old Crow upright bassist Morgan Jahnig. “It’s the entire spectrum of humanity—but when you look at the people making country music, it tends to be pretty monochromatic. If we really want to push music forward, we need to let all kinds of people have a voice.” Featuring Mississippi-bred musician Shardé Thomas on fife (a piccolo-like instrument often used in military bands), the soul-stirring “New Mississippi Flag” dreams up an insignia that truly honors the state’s rich cultural heritage (“She’ll have a stripe for Robert Johnson/And one for Charlie Pride”). “We’re living in a time in which there’s a great undoing of the mythologies that were created in order for the South to alter its view of itself, and with that undoing comes a repurposing,” Secor points out. Meanwhile, “John Brown’s Dream” unfolds as a swampy and smoldering portrait of the notorious radical abolitionist and his brutally violent attempt at rebellion.

Throughout Paint This Town, Old Crow bring their spirited reflection to an endlessly eclectic sound, spiking their songs with elements of everything from gospel (on “Gloryland,” a heavy-hearted lament for our failure to care for each other) to Southern highlands balladry (on “Honey Chile,” a melancholy love song graced with soaring harmonies and swooning fiddle melodies). That deliberate unpredictability has defined Old Crow since their earliest days, when they got their start busking on the streets with pawnshop-bought instruments. Through the years, they’ve continually breathed new life into their sound by inviting new musicians into the fold; to that end, Paint This Town marks the first album to include Jerry Pentecost (drums, mandolin), Mike Harris (slide guitar, guitar, mandolin, banjo, dobro, vocals), and Mason Via (guitar, gitjo, vocals).