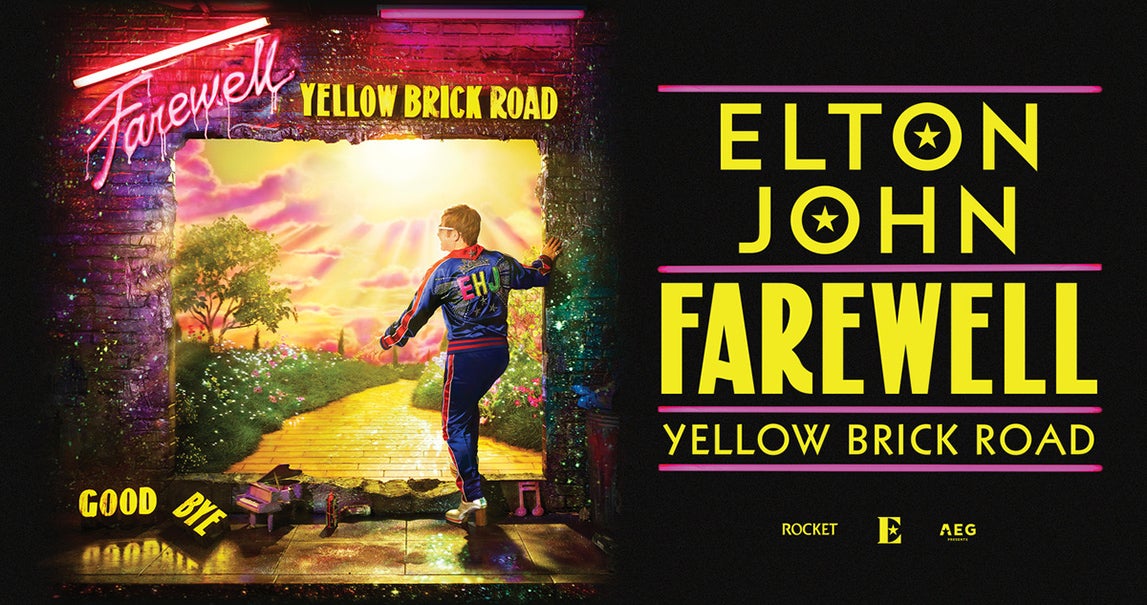 "The Farewell Yellow Brick Road Tour" kicked off to sold-out crowds in September 2018 and has received rave reviews in every market. Taking the audience on a magical journey through his career, the show features some of Elton’s most beloved songs from his legendary catalogue including, “Bennie and the Jets,” “Rocket Man,” “Tiny Dancer,” and “Philadelphia Freedom.” Elton’s music has taken him to many places, opened many doors and inspired many passions in his life. The audience will experience a rare glimpse into Elton’s life and the deeply personal meaning behind some of his greatest hits, with mesmerizing, never-before-seen photos and videos shown throughout the show from his incredible 50-year career.

Elton’s career achievements to date are unsurpassed in their breadth and longevity as the number 1 top-performing solo male artist. Elton is one of the top-selling solo artists of all time, with 1 diamond, 38 platinum or multi-platinum, and 26 gold albums, over 50 Top 40 hits, and he has sold more than 300 million records worldwide. He holds the record for the biggest-selling single of all time, “Candle in the Wind 1997”, which sold over 33 million copies. ‘Diamonds’ the Ultimate Greatest Hits album, reached the Top 5 of the UK album charts on its release in November 2017, becoming Elton’s 40th UK Top 40 album in the process. This release celebrated 50 years of his song writing partnership with Bernie Taupin. August 2018 saw Elton named as the most successful male solo artist in Billboard Hot 100 chart history, having logged 67 entries, including nine No. 1s and 27 Top 10s.

Elton announced the ‘Farewell Yellow Brick Road’ tour at New York’s Gotham Hall in January 2018. Encompassing 5 continents, and over 350 dates, this 3-year-long tour started in September 2018 and marks his retirement from touring after more than 50 years on the road. In May 2019 it was named Billboard's Top Rock Tour. To date, Elton has delivered more than 4,000 performances in more than 80 countries since launching his first tour in 1970.

2019 has already seen the release of 'Rocketman' to great critical and commercial success with nearly $200 million at the box office, a fantasy musical motion picture of his life and his much anticipated autobiography Me will be published October 15, 2019.

Among the many awards and honours bestowed upon him are six GRAMMYs, including a GRAMMY Legend award, a Tony and an Oscar, a Best British Male Artist BRIT Award, induction into the Rock and Roll Hall of Fame and the Songwriters Hall of Fame, the Kennedy Center Honor, Legend of Live Award, 13 Ivor Novello Awards between 1973 and 2001and a knighthood from HM Queen Elizabeth II for “services to music and charitable services.”

In 1992, Elton established the Elton John AIDS Foundation, which today is one of the leading non-profit HIV/AIDS organizations and has raised over $450 million to date in the global fight against HIV/AIDS. In June 2019 President Emmanuel Macron presented Elton the Légion d’honneur, France’s highest award, for his lifetime contribution to the arts and the fight against HIV/AIDS.