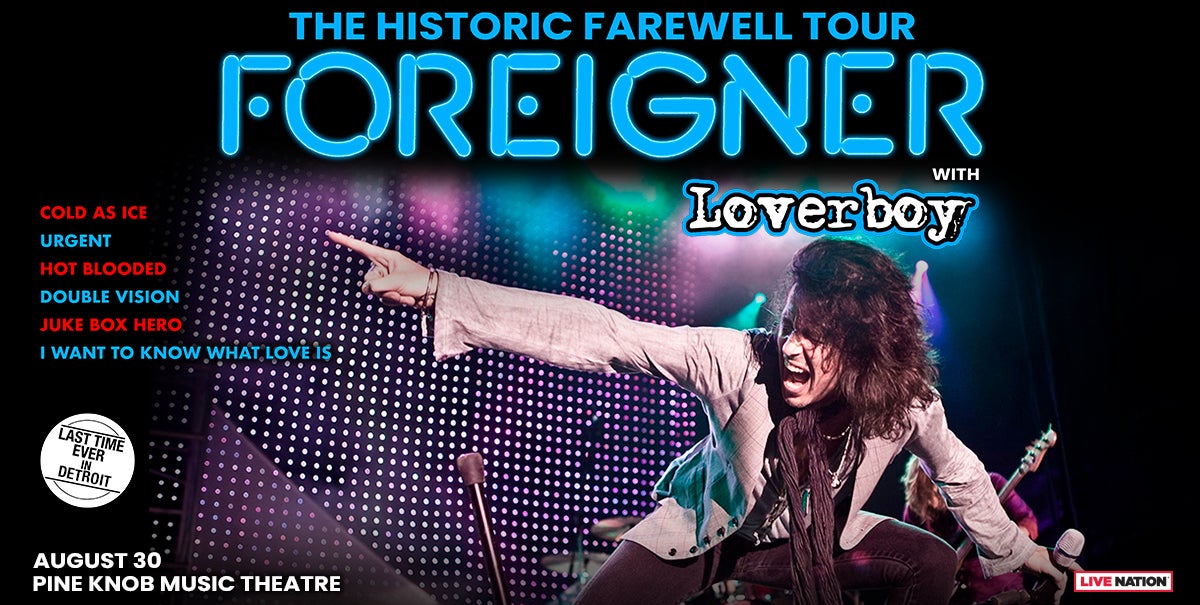 “I Want To Know What Love Is”, “Cold As Ice,” “Hot Blooded,” “Juke Box Hero,” “Urgent,” and no less than five more Top 10 hits. Today, Foreigner, the band behind these iconic songs announced the launch of their Farewell Tour, including a stop at Pine Knob Music Theatre with special guest Loverboy on Wednesday, August 30 at 7 p.m. Pine Knob Music Theatre is presented by Proud Partners United Wholesale Mortgage, Trinity Health and Ally.

The tour is set to launch on July 6, 2023, at Atlanta’s Ameris Bank Amphitheatre, the area’s largest outdoor venue. For the first leg of the US Live Nation tour, Foreigner will be joined by Loverboy, one of the 80’s biggest hit-makers. The spectacular show will thrill audiences with stellar performances of more than 20 combined chart-topping songs.

FOREIGNER will continue its long-term initiative with the Grammy® Museum Foundation to invite choirs to open the show with a live a cappella ‘Pitch Perfect’ performance of Classic Rock songs. Foreigner will join radio partners across the country to create a contest for local choirs to win donations to their music programs. One winning choir will be selected at each show, and that choir will receive a grand prize of new musical equipment.  For more details please go to foreignerchoirs.com.

Leader and founder of Foreigner, Mick Jones said, “Many years ago, I wrote a song called ‘Feels Like The First Time’ and today we are launching one last worldwide tour.  We will be presenting a show that I know will have the same enthusiasm as our very first appearances.  The tour will start this summer in America and we hope to get to every place that we have played over the last several years.  While I’m sure our fans will have mixed feelings about the end of the road for the band, I know our shows are going to delight audiences everywhere.”

Says Foreigner lead singer Kelly Hansen, "The time has come. We have more or less lived our lives on the road for almost eighteen years.  We have always strived to give you our best and we intend to finish this the same way. Foreigner has a brilliant and increasingly demanding catalogue of songs to sing and I refuse to give them less than they deserve. So, we’re going to finish strong. I want to make it very clear how grateful and appreciative we are to our audiences all over the world who have supported this band.  I’m sure there may be occasions when we’ll do some special appearances, but I think the time is coming for us to live off the road. Thank you all so much!”

"I remember how cool the last time we toured with Foreigner was in 1982.  We played to massive stadiums - New Orleans, Kansas City, Day On the Green in Oakland, JFK in Philly - and we’re back together again, 41 years later.  It's going to be the Tour of Summer ’23!" said Paul Dean of Loverboy.

Mick Jones continues to elevate Foreigner’s influence and guide the band to new horizons with his stylistic songwriting, indelible guitar hooks and multi-layered talents while lead singer Kelly Hansen, one of rock’s greatest showmen, has led Foreigner into the digital age inspiring a whole new generation of fans. Bassist Jeff Pilson; Michael Bluestein on keyboards; guitarist Bruce Watson; Chris Frazier on drums and guitarist Luis Maldonado provide an unprecedented level of energy that has resulted in the re-emergence of the astounding music that speaks to Foreigner‘s enduring popularity.  Foreigner has an extraordinary streaming and radio audience.  Click here for an overview of Classic Rock artists’ stats.

With more Top 10 hits than Journey and ten multi-platinum albums, Foreigner is universally hailed as one of the most popular rock acts in the world with a formidable musical arsenal that continues to propel sold-out tours and album sales, now exceeding 80 million.  Responsible for some of rock and roll’s most enduring anthems including “Juke Box Hero,” “Cold As Ice,” “Hot Blooded,” “Waiting For A Girl Like You,” “Feels Like The First Time,” “Urgent,” “Head Games,” “Say You Will,” “Dirty White Boy,” “Long, Long Way From Home” and the worldwide #1 hit, “I Want To Know What Love Is,” Foreigner still rocks the charts more than 40 years into the game with massive airplay and continued Billboard Top 200 album success.  Streams of Foreigner’s hits are approaching 15 million per week.

With their trademark red leather pants, bandanas, big rock sound and high-energy live shows, Loverboy has sold more than 10 million albums, earning four multi-platinum plaques, including the four-million-selling “Get Lucky,” and a trio of double-platinum releases in their self-titled 1980 debut, 1983’s “Keep It Up” and 1985’s “Lovin’ Every Minute of It.” Their string of hits includes, in addition to the anthem “Working for the Weekend,” such arena rock staples as “Lovin’ Every Minute of It,” “This Could Be the Night,” “Hot Girls in Love,” “The Kid is Hot Tonite,” “Notorious”, “Turn Me Loose,” “When It’s Over,” “Heaven In Your Eyes” and “Queen of the Broken Hearts.”  The group still features the original line-up of vocalist Mike Reno, guitarist Paul Dean, drummer Matt Frenette and keyboardist Doug Johnson with bassist Ken “Spider” Sinnaeve replacing the late Scott Smith.