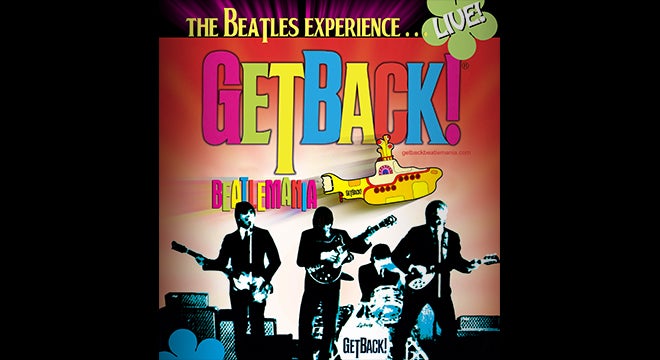 GetBack! Beatlemania celebrates the 50th anniversary of the Beatles’ White Album and Yellow Submarine when they return to Meadow Brook Amphitheatre on the campus of Oakland University on Saturday, August 25 at 8 p.m.

Internationally acclaimed as the “next best thing” to seeing the Beatles in concert, their amazing likeness to the Beatles in appearance, musical performance, wit and charm will have you reliving the exciting British invasion Ed Sullivan era, tripping through the psychedelic Sgt. Pepper period and rocking out to the final days of Abbey Road and Let It Be.

Assembled from the London and Broadway revue Beatlemania, using authentic vintage instruments, GetBack! floods two hours with over 40 classic songs, changing costumes as the show travels through the lighthearted British Invasion years to the bittersweet rooftop ending of “Let It Be,” with several stops along the way. GetBack! has so perfected the “live Beatles concert that never was” that the Boston Globe said, “This full-fledged recreation of a Beatles concert is as close as you can get!”

Tickets can be purchased at 313Presents.com, Little Caesars Arena XFINITY box office and Ticketmaster.com. To charge tickets by phone, call (800) 745-3000.