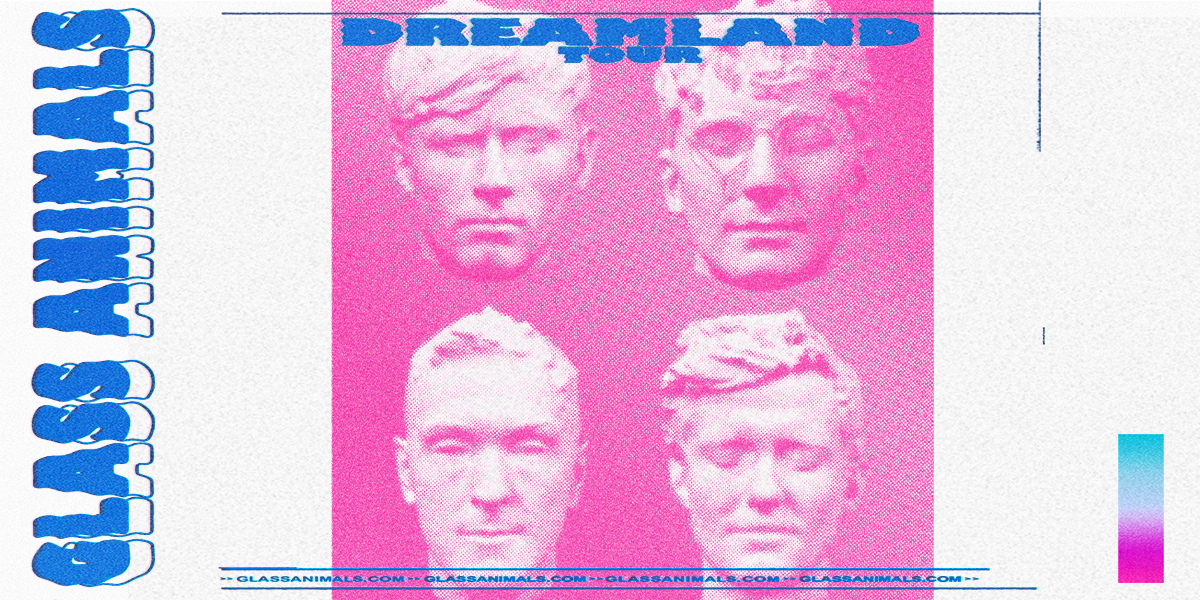 Adding to an already incredible year, Glass Animals have announced their North American “Dreamland Tour.” The run kicks off August 30th in Lewiston, NY and takes the band across North America well into 2022. The shows add to their already sold out UK tour dates, previously announced Red Rocks shows and confirmed festival performances at Bonnaroo, Life Is Beautiful, and Outside Lands.

In addition, last week the band was selected as 2021 Billboard Music Awards finalists for Top Rock Song “Heat Waves” and Top Rock Album Dreamland. This is the first time the band has been recognized by the BBMAs.

Earlier this month, Glass Animals performed “Heat Waves” on The Tonight Show Starring Jimmy Fallon, where the band took over Margate’s Dreamland Theme Park and brought it back to life with an electrifying performance—watch here. In addition, they performed on The Ellen Degeneres Show where they took over a skate rink and used fan submitted footage to fill the television screens behind their performance—watch here.

“Heat Waves” is taken from Glass Animals’ critically acclaimed third album Dreamland released last summer and this week was certified Platinum in the US. Neary a year since its release, the song continues to grow globally across streaming platforms and on radio charts. Amassing over 450 million global streams to date, “Heat Waves” peaked at #1 on the Alternative Radio Chart for 3 consecutive weeks, a first for Glass Animals in their career. The track currently sits in the Top 20 on the Top 40 Radio Chart and is making similar moves at Hot AC and AAA. “Heat Waves” held the #1 spot on the ARIA Official Singles Chart in Australia for six consecutive weeks, marking the band’s first #1 single globally and in their release history. Last week, it hit a new peak on Spotify’s Global Top 50 Chart at #25. With over 2.5 million global adjusted single sales, the song has amassed 2 million daily streams and received 16 million views of the video on YouTube. Glass Animals recently hit a new Spotify monthly listener peak of 17.2 million, surpassing the likes of Tame Impala, Gorillaz, The 1975 and The Strokes.

Since its initial release last June, “Heat Waves” has experienced a global rise in support. Having originally resonated with Glass Animals fans, word quickly spread, and the track started getting healthy traction at radio globally. Next came a sync placement on FIFA, which opened up a whole new audience and helped the track begin to climb charts all over the world. “Heat Waves” most notably was then crowned number 1 on Triple J’s Hottest 100 – an accolade not given to a UK band since 2009 with previous winners including Kendrick Lamar and Billie Eilish. A third surge in attention came more recently with an organic Minecraft affiliation, whereby the YouTuber LoverFella (2.3M subscribers) rebuilt a Glass Animals fan’s base and surprised her with a meet and greet with the band who were waiting inside. Watch it here and the Extended BTS here. Dave Bayley recently sat down to chat about the track’s creation with Hrishikesh Hirway on the coveted Song Exploder Podcast. Listen to the interview here.

Glass Animals’ album Dreamland entered UK charts on its opening week at #2 (their highest ever scoring chart position, a massive 21 spots above their last album, Mercury Prize nominated How To Be A Human Being) and charted inside the top 10 in the US, Australia, New Zealand and Ireland. The album clocked up 160 million streams in its first week of release.