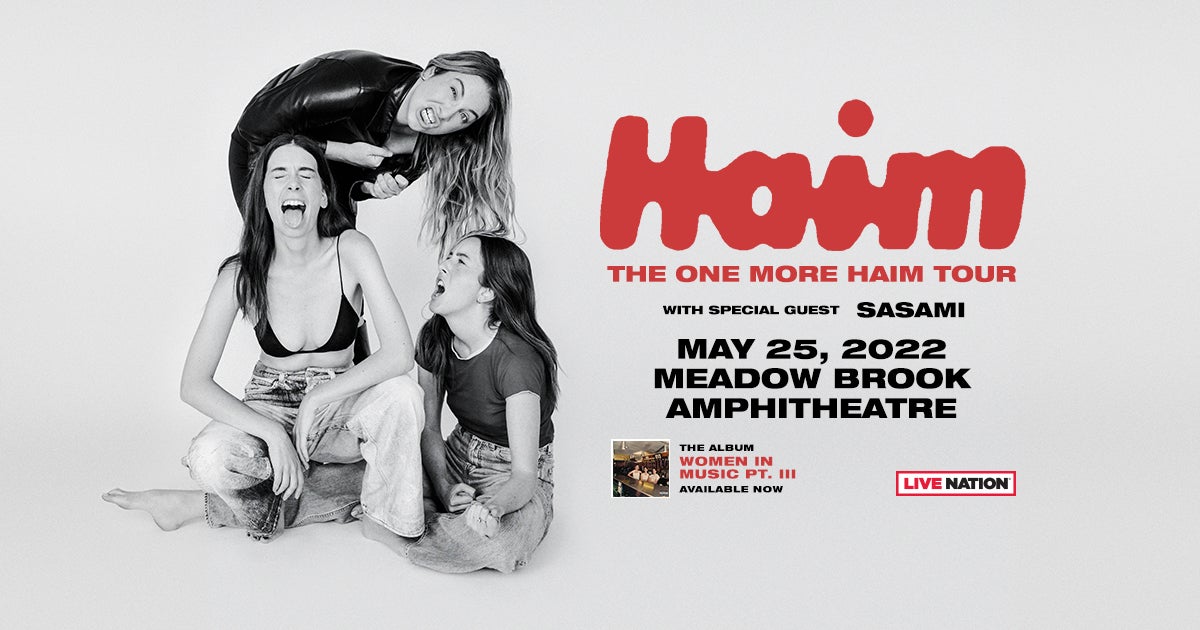 HAIM, the acclaimed Southern California-bred sister act have announced their North American tour for Spring and Summer 2022 in support of their latest album Women In Music Pt. III. Promoted by Live Nation, the band will bring the 27-date “One More HAIM Tour” with special guest Sasami to Meadow Brook Amphitheatre on the campus of Oakland University on Wednesday, May 25, 2022 at 8 p.m.

The tour will kick off on April 24 in Las Vegas, NV, and hit major cities across North America including Chicago, Houston, Miami, Washington DC, Seattle, Toronto, Philadelphia and more (see below for full list of dates). The tour sees HAIM playing LA’s famed Hollywood Bowl on May 1 and NYC at Madison Square Garden on May 17.

The Grammy® nominated album Women In Music Pt. III debuted at #1 in the Album Sales Chart, Alternative Chart, iTunes albums chart, and Rock Album Chart in the US. WIMPIII also entered the Billboard 200 in the Top 15 at #13. Named "Best New Music" by Pitchfork, they heralded, “the third album from the trio is far and away their best. Intimate, multidimensional, and wide-ranging, the songwriting shines with personality and a great curiosity for melody and style.” Rolling Stone’s four-star review called the album “an immediate gem,” while Vulture declared, “WIMPIII is their strongest work yet” and The FADER stated, “the HAIM sisters have bounced back with their best album yet.” The single “The Steps” was also Grammy® nominated for Best Rock Performance.