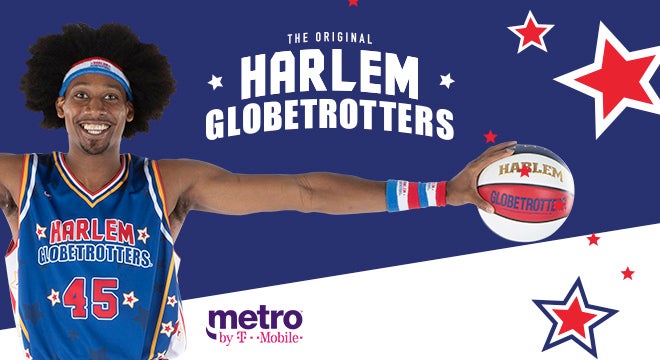 The records are highlighted by an impressive somersault basketball shot made by one of the team’s biggest stars, Bull Bullard, at a staggering 58 feet, 1.25 inches away from the basketball hoop. The other records include the first-ever record set by one of the team’s female stars and another set by the Globetrotters’ trampoline-dunk team, the Flying Globies, and are listed below:

The video of all five records can be seen at youtu.be/voA_VEyNTNI.

The Globetrotters, who are committed to bringing their fans the best experience and most electrifying athletes on the planet, will give their fans a chance to get closer than ever to the action and team’s stars with their “Fan Powered World Tour.”

At each Globetrotters game, there will be over 20 opportunities before, during and after each event where fans will get a chance to directly interact with the team’s stars – that’s a 30-percent increase over any previous Globetrotters game.

Prior to every performance, fans can secure a ticket to Magic Pass, the Globetrotters’ exclusive pregame event. Magic Pass gives fans unprecedented access to the stars of the team, an opportunity to learn tricks, shoot hoops and take pictures on the court. After each game, fans can participate in a free autograph session. #

An additional exciting new element fans can look forward to this year is a new interactive mobile app with exclusive features, including an augmented reality (AR) basketball toss game and one-of-a-kind image filters that can be shared on social media.

Also back by popular demand, fans will also get a chance to see the Flying Globies, an amazing acrobatic trampoline dunk team that will defy gravity during breaks in the game action.

For the latest news and information about the Harlem Globetrotters, visit the Globetrotters’ official Web site: and follow them on Twitter .

*Rosters will vary in each city and are subject to change.

Tickets can be purchased at harlemglobetrotters.com, Little Caesars Arena XFINITY box office and Ticketmaster.com. To charge tickets by phone, call (800) 745-3000.