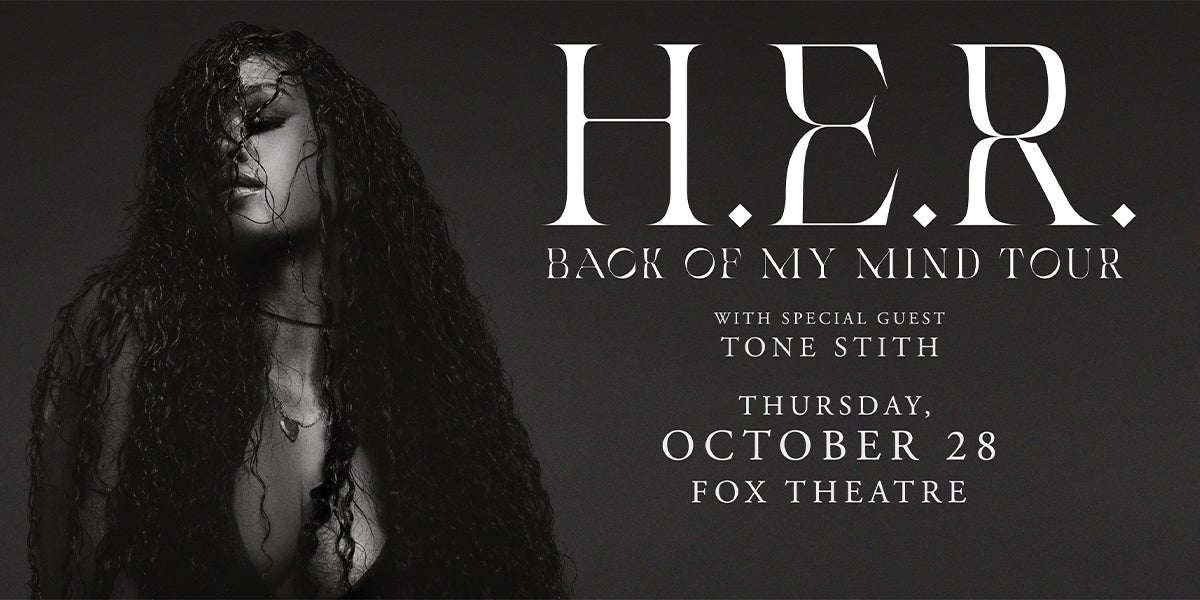 Following two sold-out shows at the Hollywood Bowl, R&B superstar H.E.R. has announced a performance at the Fox Theatre with special guest Tone Stith and Meata on Thursday, October 28, 2021 at 7:30 p.m. in support of her new album, Back of My Mind.

Three letters that need no explanation. Over the course of five years, singer/songwriter/multi-instrumentalist H.E.R. has had an incredible journey, punctuated with inspiring projects and accolades that have quickly ascended her to superstar status. But with any journey comes moments of reflection and absorbing everything that has transpired - from celebration to moments of uncertainty. With H.E.R.’s highly anticipated album Back of My Mind, she provides all of that and more, further solidifying her place as one of R&B’s young icons.

Born and raised in the San Francisco Bay Area, H.E.R. honed her craft at a very young age. From hitting the legendary Apollo Theater stage to early TV stardom all before the age of 13, H.E.R. had both the music and the star power within her and was a force from the start. At 14, she signed her first record deal with MBK Entertainment/RCA Records, though it was in 2016 when she emerged in H.E.R. full form. “It’s been a long, long journey,” H.E.R. expresses, “with many, many ups.”

H.E.R.’s 2016 debut EP, H.E.R. Volume 1 was met with critical acclaim, as the world was just beginning to learn about this teenage wunderkind. H.E.R. Volume 2 arrived a year later, which reached the Top 10 Billboard R&B charts, with The B-Sides arriving shortly thereafter. “The first projects were very much like, ‘What are we doing? And where are we going? And who am I? What is this? What does this mean?’” H.E.R. explains. “And now it's very much like, ‘Oh, this is exactly what I want. This is who I am. This is what it is.’” That growth became evident with every project, as each one propelled H.E.R. to new heights, evolving along the way both on record and on stage. H.E.R.’s eponymous compilation project in 2017 marked a whole new era for the artist in a short amount of time. The Grammy® Award winning, certified Platinum work topped the Billboard R&B charts, armed with hit singles like the Platinum “Focus” and the four times Platinum “Best Part” with Daniel Caesar.

Over the course of two more years, H.E.R. continued her steady ascent, releasing projects like the prolific I Used To Know Her: The Prelude and I Used To Know Her: Part 2, both in 2018, along with 2019’s full compilation, I Used To Know Her. To date, H.E.R. has won four Grammys® (including 2021 Song Of The Year for “I Can’t Breathe” and Best R&B Song for “Better Than I Imagine”), five Soul Train Music Awards, one Academy Award (for Best Original Song – “Fight For You”), along with countless others. H.E.R. is regarded as one of music’s most admired and respected musicians at only 24 years old. She has performed on massive stages from The Super Bowl to the Grammys®, the Emmy’s, Global Citizen Festival, and Rock In Rio. Back of My Mind is a culmination of her journey thus far.

“I’ve learned a lot about myself,” H.E.R. says. “A lot has gone into this, these past few years—with myself, but of course the accolades, the big stages and all of these things that have happened. It feels surreal. I’ve been taking it in and enjoying every single moment.” Back of My Mind contains pieces of various time periods throughout H.E.R.’s career, as songs were created over the course of a few years. “When I put together this album with my team, it was really like showing different perspectives and realizing that I’ve experienced a lot in the past four or five years,” H.E.R. adds. “It’s pieces of Volume 1, pieces of I Used To Know Her, but elevated. It’s my perspective now.”

Tracks like “Find A Way” (featuring Lil Baby) tackle self-doubt and the doubt of others, while “Bloody Waters” with Thundercat displays H.E.R.’s take on the world at large, with revolutionary lyrics that still show emotion. “Mean It” is full of feeling, as “Lucky” and “My Own” channel the spirit of Volume 1, while “For Anyone” and “Don’t” show a sonic shift to live instrumentation. The previously released singles “Slide” (with YG) and “Damage” bring a familiarity to the 22-track offering, which includes more cameos from the likes of Ty Dolla Sign, Cordae, Chris Brown, Yung Bleu, DJ Khaled, and Bryson Tiller. It’s an amalgam of everything H.E.R. is: bright, dark, dynamic, vulnerable, and strong.

The project is not only intensely personal, but embodies H.E.R.’s ability to capture the sound of R&B like none other. “It was really like, ‘How can I take people on an R&B musical journey?’” H.E.R. reflects. “To me, it’s all the different moods of R&B, but also a celebration of how far I’ve come.” The album has already topped the Billboard R&B charts and reached Number 6 on the Billboard 200, as well as Number 4 on the Billboard R&B/Hip-Hop Albums chart. It’s a testament to H.E.R.’s knack for being a bona fide hitmaker, while still remaining authentic to H.E.R. self. And there is so much more in store, with more music on the way, as well as H.E.R.’s long-awaited return to the live stage.

“In the beginning, it was just seeing what happens when I put my music out,” H.E.R. humbly advises. “I was figuring out who I was becoming, and as I’ve changed my goals have changed. Now I’ve got to dream bigger.”