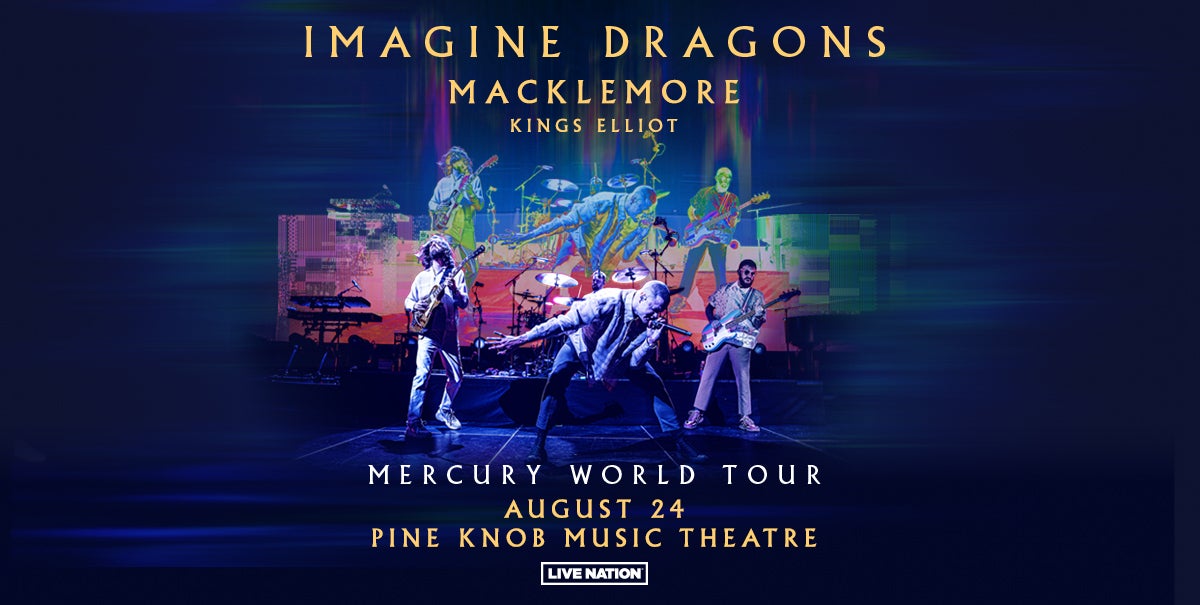 Multi-platinum Grammy® award winning rock band Imagine Dragons have announced 20 new shows on their massive Mercury World Tour, including a stop at Pine Knob Music Theatre on Wednesday, August 24 at 6:30 p.m. Produced by Live Nation, the summer North American tour celebrates the release of their latest album, Mercury – Act 1 (KIDinaKORNER/Interscope) kicking off this August in Salt Lake City, UT with special guests Macklemore and Kings Elliot on select dates and making stadium stops in Boston, Toronto, and their hometown of Las Vegas before wrapping up in Los Angeles, CA in September. This tour will mark the band’s biggest North American shows of their career to date. Pine Knob Music Theatre is presented by Proud Partners United Wholesale Mortgage, Trinity Health and Ally.

On the heels of “Enemy,” which has topped the Alternative Radio chart for the past seven weeks and is rapidly ascending at Top 40 radio (#10) and Hot AC (#9), Imagine Dragons unveiled their new single, “Bones,” the first new music from their forthcoming release Mercury – Act 2. A spirited examination of life and death, the song explodes with an infectious chorus that celebrates the intangible spark that ignites our beings. Listen to “Bones” HERE and view the lyric video HERE.

Imagine Dragons teamed up with esteemed producer Rick Rubin on Mercury – Act 1, which debuted in the top 10 of the Billboard 200 and at No. 2 on Billboard’s Top Alternative Albums and Top Rock Albums charts. Mercury - Act 1 marks the band’s first new music since their 2018 album Origins, and features the singles “Wrecked”, “Cutthroat” and “Follow You.” “Follow You” reached No. 1 on both Mediabase’s Alternative Radio chart and Billboard’s Alternative Airplay chart. It marked the band’s quickest ascent to the top of the Billboard chart, surpassing the seven-week climb for “Natural” in 2018 and eight-week climb for “Believer” in 2017.

With 49 million albums and 55 million songs sold globally, as well as 75 billion combined streams, Imagine Dragons remains one of the best-selling rock bands, reinventing the genre with their enormous breakout success across the 2010s. Billboard’s Top 3 rock songs of the decade belonged to the band – “Believer,” “Thunder” and “Radioactive.” Formed in 2009, Imagine Dragons developed a grassroots following with a series of independently released EPs before making their major label debut on KIDinaKORNER/Interscope with the 2012 EP Continued Silence. Night Visions, their 2012 full-length debut, entered the Billboard 200 at No. 2 and the lead-off track “Radioactive” topped Billboard’s Hot Rock Songs chart, won a Grammy® for Best Rock Performance, and achieved RIAA Diamond status. 2015’s Smoke + Mirrors debuted at No. 1 on the Billboard 200. Evolve, which followed in 2017, earned a Grammy® nomination for Best Pop Vocal Album and unleashed three No. 1 Alternative radio hits: “Believer,” the Grammy®-nominated “Thunder” and “Whatever It Takes.” All three songs were also top 5 hits at Top 40 radio, with “Thunder” rising to the No. 1 spot. The band’s fourth album, Origins, debuted atop Billboard’s Alternative Albums and Top Rock Albums charts and lead single “Natural” spent nine weeks at No. 1 at alternative radio and set the current record for all-time “most spins in a week” at the format.

Their highly anticipated fifth studio album Mercury – Act 1 was released on September 3, 2021. Teaming up with esteemed producer Rick Rubin and with its title drawing inspiration from the word “mercurial,” Mercury – Act 1 is a candid album that abandons metaphorically charged lyrics and instead embraces emotional extremities, holding nothing back. It marks the band’s first album since 2018’s Origins.

“Follow You” and “Cutthroat” were the first glimpses into the new record, released simultaneously in March 2021, with the former hitting No. 1 at alternative radio and Billboard’s Alternative Airplay chart, marking the band’s quickest ascent to the top of those charts. The album’s current single, “Wrecked,” is a confessional exploration of grief, written by lead vocalist Dan Reynolds after losing his sister-in-law to cancer in 2019

Introducing herself to the world with a rarely-seen example of complete, raw honesty, the visual for Kings Elliot’s debut single “I’m Getting Tired Of Me” acts as an emotional punch in the gut. A stark piece of candid black and white footage, captured as the half-British, half-Swiss singer had a crippling panic attack whilst shooting what she had intended to be the ‘proper’ video for the track, it’s an uncomfortable image that belies the sweet sounds that surrounded it.

In truth, however, it’s a duality that sits at the heart of everything she creates. On one hand, Kings Elliot is a wildly ambitious artist, who strives to create unique soundscapes for her confessional songs; on the other, she’s a young woman who has had to learn to embrace her struggles, who – having been diagnosed with Borderline Personality Disorder – has fought internal demons her entire life in order to get to this point, and for whom music is not only a want but a need.

If tenacity and perseverance are things Kings Elliot has had to embrace more than most, then the songs that make up debut EP Chaos In My Court – released track-by-track since that debut last year – are testament to the importance of both strength and vulnerability.

Musically, the singer draws inspiration from the wistfully melancholic melodies of the `40s and `50s, realizing that a version of this soothing world was where she needed her own often fraught and turmoil-laden lyrical sentiments to live, turning them into devastating songs that sound uniquely current, yet timeless.

“Dancing Alone,” which details the tricky task of navigating a relationship whilst having Borderline, and cinematic follow-up “Bitter Tonic” – which fills its lyrics with courtly metaphors for struggle and spawned the EP's title – are keen examples of this: tracks that explore dark and difficult emotions with a sweetness of melodic touch. “Call Me A Dreamer” and “The Outsider” complete Kings’ debut EP – the former, a song to her ‘well’ self to remind her that the rollercoaster is still continuing; the latter a yearning lament of someone who wants nothing more than to belong somewhere.

Though Kings Elliot might always consider herself an outsider to some degree, now she has an outlet through which to channel her hopes and fears, with an ever-growing audience and a debut release that acts as an empathetic, important opening statement for an artist destined to mean much to many people.

Macklemore most recently released his new single “Next Year” featuring Windser (Oct 29). The new record is produced by Ryan Lewis, the first new song the two have made in five years. Macklemore’s next full length project will arrive in 2022.

Multi-platinum and Grammy® award winning rapper Macklemore has made history as an independent artist with a combination of commercial success, critical acclaim and international appeal. Gemini, Macklemore’s first solo effort in 12 years, was released in 2017 and debuted at #2 on the Billboard Top 200 chart and #1 on the charts for Rap, R&B/Hip-Hop, and Independent Albums. Gemini includes three Platinum-certified singles, “Glorious" (featuring Skylar Grey), “Good Old Days” (featuring Kesha) and “Marmalade” (featuring Lil Yachty).

Gemini follows two releases with producer Ryan Lewis: the multiple-Grammy® award winning and multi-platinum album, The Heist (which spawned two #1 singles, the Diamond-certified “Thrift Shop” and multi-platinum “Can’t Hold Us”) and 2016 release This Unruly Mess I’ve Made, which featured the Platinum-certified single “Downtown.”

Collectively Macklemore’s music videos have been viewed over three billion times and he is one of only two rappers to have a Diamond-certified single (“Thrift Shop”).
Recently, the Seattle rapper has featured on international platinum hits “Summer Days,” alongside Martin Garrix and Patrick Stump, and “These Days” with Rudimental, Jess Glynne and Dan Caplen. He’s recently performed on Ellen and The Tonight Show with Jimmy Fallon, and was a guest artist on NBC’s hit new series Songland.