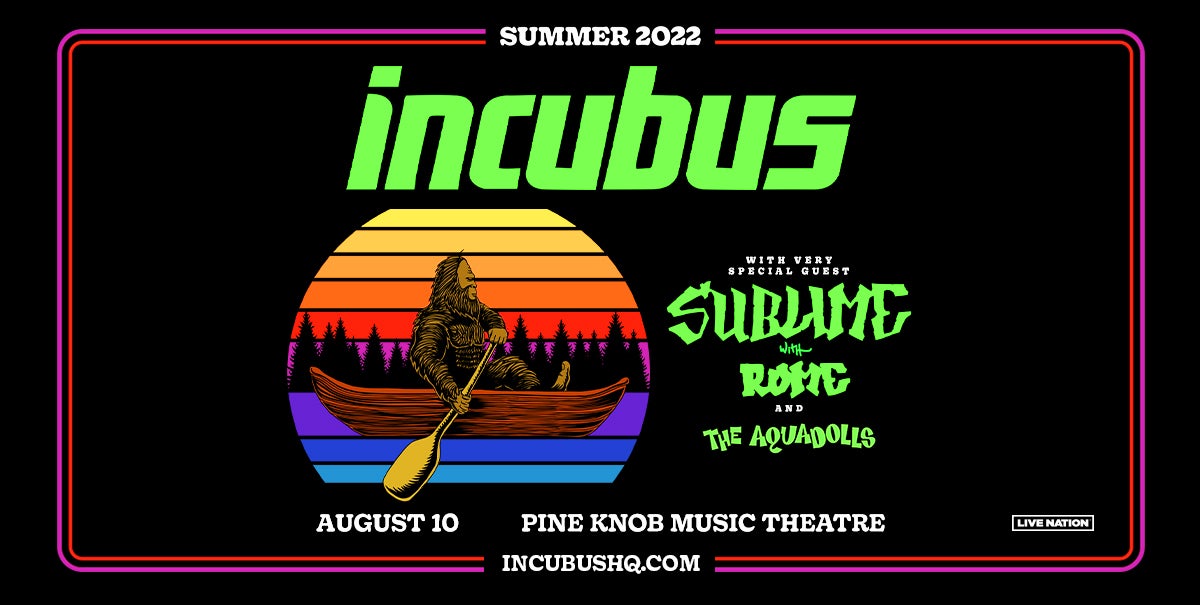 With more than 23 million albums sold, rock superstars Incubus are set to light up summer stages in concert with very special guests Sublime with Rome and The Aquadolls beginning this July. Produced by Live Nation, the tour makes a stop at Pine Knob Music Theatre on Wednesday, August 10 at 7 p.m. Pine Knob Music Theatre is presented by Proud Partners United Wholesale Mortgage, Trinity Health and Ally.

Since first coming together in 1991, the Grammy® nominated band, Incubus, have consistently elevated themselves and alternative music to new creative heights. The California band’s sales have eclipsed 23 million albums worldwide to date with multiplatinum and platinum certifications from around the globe. Consistently topping the Billboard charts, the band has had five consecutive Top 5 debuts. Last year in 2021, Incubus marked the 20th anniversary of their multi-platinum and critically acclaimed album, Morning View. Additionally, they maintain their status as a streaming phenomenon, averaging 4.1 million monthly listeners on Spotify and clocking over 1 billion-plus streams across all platforms.

About Sublime with Rome

Sublime With Rome was formed in 2010 by lead-singer/guitarist Rome Ramirez, bassist Eric Wilson, and drummer Carlos Verdugo. The band previously toured in support of their hit 2019 album BLESSINGS with singles “Wicked Heart” and “Light On” making a splash at alternative radio. BLESSINGS is the band's third studio album, and it was helmed by Rob Cavallo, the producer behind Green Day, My Chemical Romance, Linkin Park, and more. In 2020 Sublime with Rome dominated the rock and alternative music charts as well as headlining shows in 5K+ capacity rooms and major festivals worldwide. With fan-favorite hits such as “Wrong Way,” “Saniteria,” “Badfish,” “What I Got,” “Caress Me Down,” “40oz to Freedom” and many more, the band's concerts are pure sing along enjoyment from beginning to end.

The Aquadolls formed in La Mirada, CA in January 2012. Lead singer and songwriter Melissa Brooks began recording bedroom demos of her songs and eventually released the album We Are Free in early 2013, followed by the LP Stoked on You in December 2014.  After a brief break from releases, the stars aligned in July 2018, and the new era of The Aquadolls commenced with Jacqueline Proctor on drums and Keilah Nina on bass. The band grew as a powerful threesome leading up to the release of The Aquadolls' highly anticipated second album, The Dream and the Deception, recorded and self-produced by Brooks and self-released October 28, 2018, on Aqua Babe Records. Following their sophomore album, the trio self-released the single "Suck on This" in summer 2019, followed by their 2020 viral cover of Lash's "Take Me Away" (a track made famous via its inclusion in the 2003 Lindsay Lohan-starring Disney film 'Freaky Friday'). They signed with California based Enci Records in 2021 and released a series of well-received singles (“Disappearing Girl” and "Cry Baby"), while playing festival dates such as Lollapalooza, Austin City Limits, Beach Life and Ohana Festival, opening for Jimmy Eat World and touring with the likes of White Reaper and more. The Aquadolls will release a new EP in 2022.