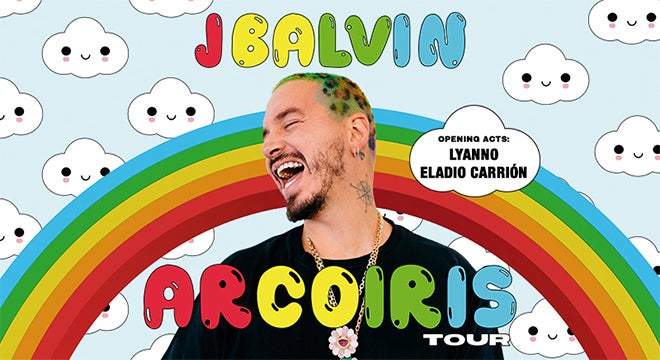 Following his widely praised, back-to-back weekend performances recently on the main stage at Coachella, Reggaeton’s leading global ambassador J Balvin announces his highly anticipated fall North American tour. Balvin’s history making Coachella debut was just a first glimpse of what fans can expect on the upcoming “Arcoiris Tour” – with multiple chart-topping hits and groundbreaking visual production, which will be brought to life once again by the Colombian superstar and the FriendsWithYou Art Collective. Produced by Live Nation, the 25-city trek will visit the Fox Theatre in The District Detroit on Friday, September 20 at 8:00 p.m. Special guests Lyanno and Eladio Carrión will provide support.

American Express® Card Members can purchase tickets before the general public beginning Tuesday, May 14 at 10 a.m. local time through Thursday, May 16 at 10 p.m. local time.

The tour will kick off on August 30 in San Juan, Puerto Rico, and make stops in Miami, Toronto, New York City, Las Vegas and more before wrapping on October 26 in Los Angeles, CA.

Following the “Arcoiris Tour” onsale, look for J Balvin to return once again to The Tonight Show starring Jimmy Fallon with a special interview and performance appearance on May 20. Before the tour kickoff, J Balvin will be making history once again this summer as the first Latin artist ever to headline the famous Lollapalooza Festival in Chicago, IL, taking place August 1-4 this year in Grant Park.

Declared as “Reggaeton’s Global Ambassador” by The New York Times, J Balvin is now one of the top streaming music artists in the world, regardless of language, and has developed a legion of fans represented by over 60 million social media followers. Likewise hailed by Billboard as “the biggest breakout act Latin music has seen in many years” and Pitchfork as “the face of modern Reggaeton,” J Balvin is leading a second generation of Musica Urbano stars that have propelled Latin music to an unprecedented global embrace. Simultaneously, Balvin has become Latin music’s strongest cultural envoy to both the fashion and pop art communities, while becoming one of the music industry’s most in-demand collaborators, and worldwide major festival performers.

J Balvin’s most recent album Vibras debuted at #1, gave birth to Latin music’s most-praised tour of 2018, and was hailed by TIME. Rolling Stone, Billboard and many more as: “One of the Best Albums of 2018” – while also propelling the Colombian star to frequent #1 global rankings on both YouTube & Spotify’s charts. This year has already seen J Balvin perform in the opening segment of The Grammy® Awards, named the Premios Lo Nuestro “Artist of the Year” for an unprecedented third consecutive year, seen his genre anthem “Reggaeton” notch his 13th #1 Billboard single, and become the first male Latin music artist to launch his own fashion line with Guess’ “Vibras” collection. As Latin music’s leading representative on this year’s global festival season, J Balvin has already been named the first-ever Latin music artist set to headline Lollapalooza, and just delivered the first-ever Reggaeton set on the mainstage at Coachella.