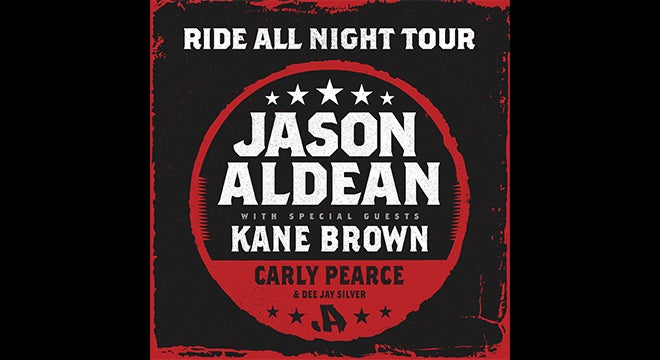 Due to overwhelming fan demand, a second DTE Energy Music Theatre show has been added to Jason Aldean’s “Ride All Night Tour”. Now, the three-time and reigning ACM “Entertainer of the Year” will perform back-to-back nights on Saturday, September 28 and Sunday, September 29. Kane Brown has been announced as a special guest for the newly added show on Sunday.

The "musically muscular, big-tent entertainer” (The Atlantic) will deliver a mix of new hits and fan favorites as he knows to choose “a pile of hits to keep a sold-out crowd singing along for 95 minutes" (The Oakland Press). Proving to be a “natural born entertainer who consistently delivers his best” (CMT) Aldean "has got this thing down pat” (UPROXX) as “he sells out stadiums and continues to bring his singles to the top of the radio charts” (Forbes). Aldean is only the second Country act in history to score four consecutive chart-toppers on the all-genre Billboard 200 albums chart with his current album REARVIEW TOWN, with six of his previous LPs having achieved Platinum certification or better. His record-breaking eighth studio album includes his current Top 5 and climbing hit “Girl Like You” along with the two back-to-back multi-week chart toppers “You Make it Easy” and “Drowns The Whiskey." The path paved by his wide-open sure-footed approach has defined the genre’s 21st century including more than 17 million total album sales, 21 No. One singles and countless recognition from the Grammys®, ACMs, CMAs, BBMAs, People’s Choice Awards and more.

For more information and for a full list of upcoming tour dates, visit www.jasonaldean.com.