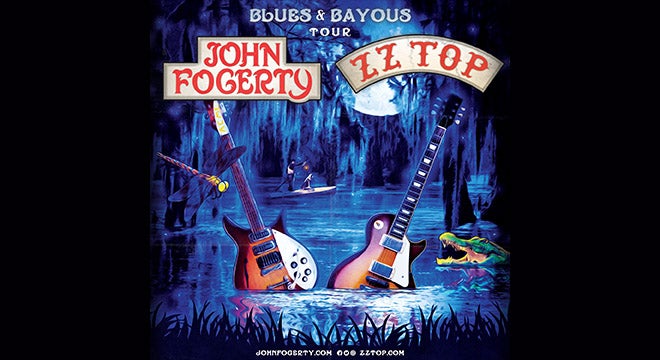 Legendary rock musicians and cultural icons John Fogerty and ZZ Top will come together for the “Blues and Bayous Tour” this spring.  The tour, which opens on May 25, will make a stop at DTE Energy Music Theatre on Wednesday, June 27 at 7 p.m.

Of the pairing, Fogerty said, “ZZ Top is one of my favorite bands, and Billy F Gibbons is one of my all-time favorite guitarists. Riffs, blues and bayous... bucket list!”

ZZ Top’s Billy F Gibbons commented, “John Fogerty along with ZZ Top have been followers of blues and rock since the beginning and we’re looking forward to rippin’ it up together this spring. We’ve got a great show lined up for ya’!”

As co-founder of Creedence Clearwater Revival, Fogerty’s career spans 50 years and he is hailed as one of the most influential musicians in rock history. As the writer, singer and producer of numerous classic hits including “Born on the Bayou”, “Green River”, “Proud Mary”, and “Bad Moon Rising”, Fogerty has been honored as one of the 100 Greatest Guitarists, 100 Greatest Songwriters, and 100 Greatest Singers by Rolling Stone. Earning induction to the Rock and Roll Hall of Fame, Songwriters Hall of Fame, and Baseball Hall of Fame, he is also a New York Times best-selling author for his memoir, Fortunate Son: My Life, My Music.

ZZ Top holds the distinction of being one of the longest running bands with the original line-up.  Billy F Gibbons, Dusty Hill and Frank Beard reflect their Texas roots in everything with their non-stop rock and blues, resulting in over 50 million albums sold worldwide. The band was inducted into the Rock and Roll Hall of Fame by Keith Richards calling the band’s relationship to the blues, “the heart of the matter.”

More information can be found by visiting: https://www.johnfogerty.com/ and http://www.zztop.com/