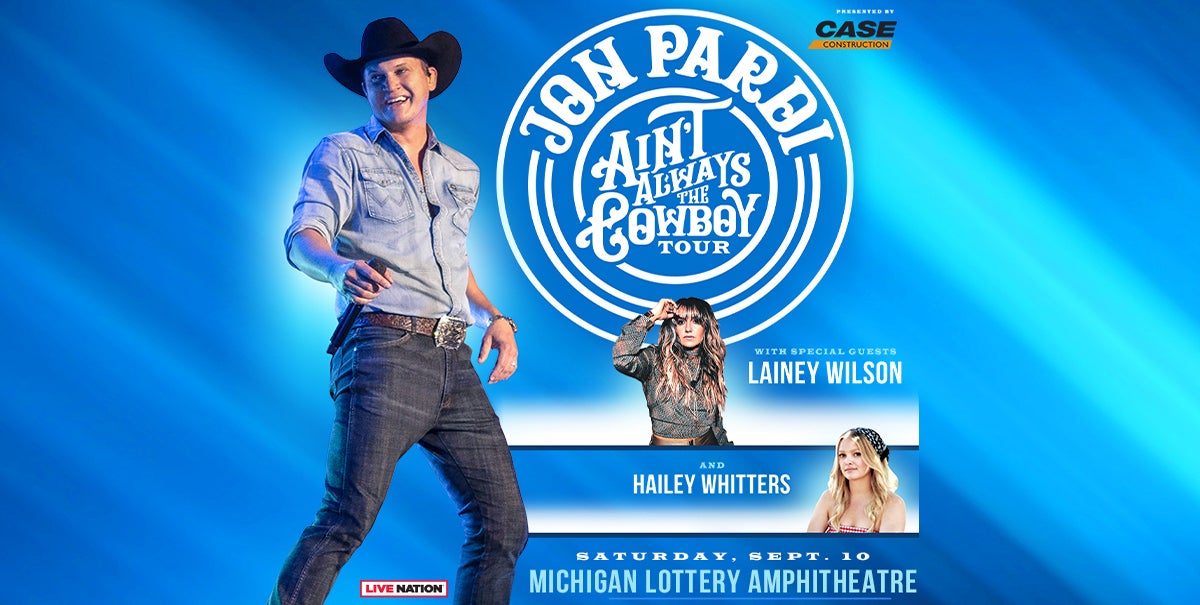 Tickets (starting at $29.70 on the lawn) go on sale Friday, March 4 at 10 a.m. To purchase tickets in the Crest Ford pavilion, Ford Motor Company luxury seats and on the lawn, visit 313Presents.com, LiveNation.com, Ticketmaster.com and the XFINITY Box Office at Little Caesars Arena.

The tour kicks off in Irving, TX on July 14 and run through October 1 with a headlining show at Nashville’s Ascend Amphitheater.

“I’m really excited to take two great friends and great artists out as openers for the ‘Ain’t Always The Cowboy’ tour,” said Pardi. Additionally, he shared with American Songwriter “you get your buddies and put on a good show anywhere people will have you. Indeed, that’s what most heartens.”

Pardi broke the news in his American Songwriter February Issue Cover Story, where he opened up about his new single, “Last Night Lonely” and his upcoming tour with two of Nashville’s most respected women in country music – Lainey Wilson and Hailey Whitters. Pardi also discussed his new single-the first off of an upcoming project – “Last Night Lonely” in the Digital Cover story, telling American Songwriter “What I love most about music is the feelings. They make you dance, cry, have a drink. Fall in love or get the hell out of love. That’s why I love music and why it will always be a part of my life, your life—that’s why we’re here.”

“CASE Construction Equipment has been the ultimate sponsor and partner. As a kid who grew up in construction and agriculture it’s been a dream come true to work with them,” said Pardi. “I’m really excited about continuing this great partnership and having them on board for the ‘Ain’t Always The Cowboy’ tour.”

Pardi’s tour announcement comes after last week’s first look at his highly anticipated upcoming studio release with “Last Night Lonely.” The fiddle and steel-drenched track further etches Pardi’s “long-lasting mark on the genre” (MusicRow), following his critically acclaimed third album, Heartache Medication. Nominated for Album of the Year by both the CMA and ACM, Heartache Medication was named one of Rolling Stone’s Best Country Albums of 2019 while standing as the only country album on the Los Angeles Times “Best Albums of the Year” list. With an impressive ability to carve his own path proving “the kind of country music multiple generations came to know, and love can still work on a mass scale” (Variety), Pardi’s instantly identifiable twang, fiddle, and steel guitars “apply new ideas to country’s old sounds” (Los Angeles Times). Lauded as a “hero in the making” (Variety), he continues to “bring authenticity back into Country music” (People).

“One of Country music’s most promising young stars,” (Whiskey Riff) Lainey Wilson has earned the enthusiasm of the industry, having been named to nearly every “Artist to Watch” list, winning MusicRow Magazine’s Discovery Artist of the Year award and being crowned Billboard’s “Top New Country Artist of 2021,” the Louisiana native is one of Nashville’s hottest and most buzzed-about new artists. Landing her first No. 1 with her Platinum Certified “Things A Man Oughta Know,” nearly 10 years to the day after leaving her small farming community in a camper trailer to chase her dreams, she has won over legions of fans with her signature Bell Bottom Country sound and aesthetic, which blends traditional Country with a modern yet retro flare. A prolific and sought-after songwriter (having co-writer credits on songs by artists including Luke Combs and Flatland Calvary), Lainey is a fresh, fierce voice in Nashville, delivering one of the “Top Country Albums of 2021” (Rolling Stone, Taste of Country, and American Songwriter) with her label debut, Sayin’ What I’m Thinkin’. With a rockstar stage presence, her artistry has taken her across the globe, performing for sold-out crowds throughout the US, UK, and Germany with notable names like Jason Aldean, Hardy, Justin Moore, Tyler Farr, Ashley McBryde, Randy Houser, Josh Turner and more. Her current single, “Never Say Never” with Cole Swindell is Top 15 at Country Radio and continuing to make a fervent climb up the charts. For more information and upcoming tour dates, visit www.laineywilson.com or follow on Instagram @laineywilsonmusic / Twitter @laineywilson / Facebook @laineywilsonmusic.

This Iowa-born, Nashville-based rising Country star scored her breakthrough moment in 2020 with the release of her self-funded debut album The Dream, which was praised as “the year’s deepest country album” (The Washington Post) and went on to appear on more than 15 year-end best of lists including #1 on both Stereogum’s “10 Best Country Albums of 2020” and Garden & Gun’s “Best Southern Albums of 2020” list. The subsequent deluxe album Living The Dream found Whitters’ self-fulfilling The Dream’s prophecy and enlisting her friends and collaborators Brent Cobb, Jordan Davis, Hillary Lindsey, Lori McKenna, Little Big Town, and Trisha Yearwood to appear on five new songs, leading NPR’s Fresh Air to call her “one of the most interesting voices in country music.” In 2021 alone, Whitters toured with Luke Combs and Midland, was named the inaugural Opry NextStage Artist of the year, scored her first CMT Music Award nomination for “Breakthrough Video of the Year” (“Fillin’ My Cup” feat. Little Big Town) and received her first Grammy® nomination for Song of the Year for “A Beautiful Noise,” which was written by Ruby Amanfu, Brandi Carlile, Brandy Clark, Alicia Keys, Hillary Lindsey, Lori McKenna, Linda Perry and Hailey Whitters, and performed by Alicia Keys and Brandi Carlile. Now boasting over 75 million streams across her catalog, Whitters will embark on her debut headline “Heartland Tour” this winter and release her highly anticipated third album Raised on March 18, 2022 via Pigasus / Songs & Daughters / Big Loud.