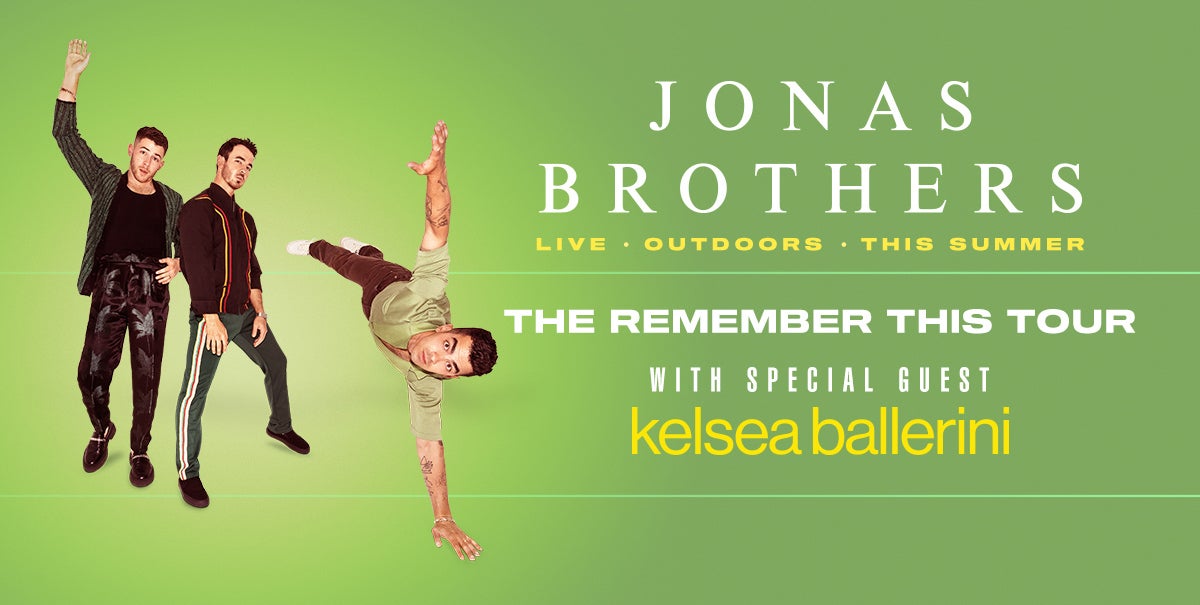 Global superstar trio Jonas Brothers are back on the road after the smash success of their “Happiness Begins” tour in 2019 sold over 1.2 million tickets and grossed over $120 million dollars. This time the brothers are guaranteeing happiness is BACK and that fans are going to remember this with their 2021 ‘Remember This’ tour. Multi-platinum country music superstar Kelsea Ballerini will be joining the Brothers out on the road this summer.

Citi is the official presale credit card of the Remember This Tour. As such, Citi cardmembers will have access to purchase presale tickets beginning Monday, May 24 at 10 a.m. local time until Wednesday, May 26 at 10 p.m. local time through Citi Entertainment. For complete presale details visit Citientertainment.com.

“We couldn’t be more excited to officially announce we are going on tour THIS summer and bringing our friend Kelsea Ballerini! If this past year has taught us anything it’s that we need to remember the important moments in our lives. We hope these shows will be special moments for our fans, our friends and our families and we can’t wait to see all their faces soon!!” - Jonas Brothers

Produced by Live Nation, the 44-date tour will kick off in Las Vegas, NV on August 20, stopping at major cities across the country including San Francisco, Chicago, New York, and Houston before wrapping up in Los Angeles at the Hollywood Bowl on October 27.

Leading up to the tour, the Jonas Brothers will kick off a partnership with NBCUniversal which is inspired by the themes and anticipation of the Tokyo Olympics featuring a unique activation surrounding the band’s upcoming single “Remember This.” The Jonas Brothers will debut the new song on the first night of the U.S. Track & Field Trials on Friday, June 18, between 10-11 p.m. ET on NBC, roughly one month before the Tokyo Olympics begin on July 23. “Remember This” will tell an Olympic-inspired story with athlete imagery and will feature a special message from the Jonas Brothers.

In addition to the debut of the song, the Jonas Brothers will make their first-ever performance of “Remember This” within NBCUniversal’s coverage of the Games this summer. The in-Games version of the single will include new lyrics inspired by the Tokyo Olympics and Team USA.

The partnership surrounding “Remember This” complements the premier of Olympic Dreams featuring the Jonas Brothers, which was announced earlier this week and will air two days before the Opening Ceremony of the Tokyo Olympics on July 21 at 8 p.m. ET/PT on NBC.

Jonas Brothers took the world by storm in 2019 with the surprise release of their critically acclaimed and widely successful single "Sucker" following a six-year hiatus. The triple-platinum single debuted at #1 on Billboard's Hot 100, becoming the first #1 for the band and the first #1 debut from a group this century. The band went on to release Chasing Happiness, an Amazon Original film documenting the brothers rise and return to music, before going on to deliver their third #1 album debut with the release of their platinum-selling album Happiness Begins (Republic Records). The band continued to soar with their sold-out “Happiness Begins Tour,” with over 1.2 million tickets sold.

Kelsea Ballerini is recognized as one of the most influential women in country music today and has consistently made history since the start of her career. Following the release of her debut album, she became the only female country artist to hit #1 with the first three consecutive singles from a debut album. She has platinum and gold album certifications, a career total of eleven gold and platinum singles certifications and has accumulated total streams exceeding 3 billion to date. Ballerini has garnered two GRAMMY® Award nominations, won two ACM Awards and has also received multiple career nominations from the ACM Awards, American Music Awards, CMA Awards, CMT Awards and the People’s Choice Awards. Most recently, she received a 2021 ACM Award nomination for “Female Artist of the Year” and was also welcomed as the Grand Ole Opry’s youngest current member.

Kelsea Ballerini released two acclaimed albums in lockdown last year. In March of 2020, she debuted her self-titled third album kelsea (Black River Entertainment). Her most personal effort to date, the album was met with critical praise, including from NPR who opined, “Kelsea Ballerini is definitely one of the most influential women in country right now… she’s defining the sound of the genre.” The debut single from the album, “homecoming queen?”, which the New York Times deemed “excellent,” was certified platinum, marking her fastest single to achieve this milestone yet. Her third single from the album, “hole in the bottle” recently reached Gold RIAA certification and earned Kelsea her sixth #1. Her latest single from the release, “half of my hometown” features a special guest vocal appearance from eight-time Entertainer of the Year and fellow East Tennessee songwriter/superstar Kenny Chesney. While under quarantine, Ballerini created the second half of that story, ballerini. On this album, she carefully deconstructed each song from the kelsea album and re-recorded everything with minimal accompaniment. Co-producing the release, Ballerini showed another side of herself with this reimagined take, highlighting the lyrical power of kelsea as she stripped all of the songs down to the bare essentials.