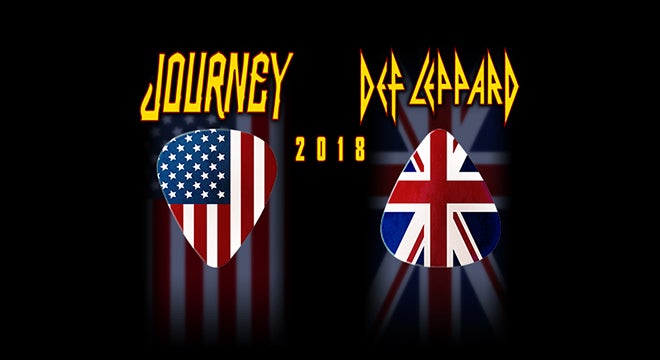 Promising to be the Tour of the Year, two of the world’s greatest rock bands – Def Leppard and Journey - are teaming up for a massive co-headlining North American tour composed of both stadium and arena concerts, half the shows being closed by Journey and half by Def Leppard. The tour will perform at Comerica Park on Friday, July 13, with special guests Pretenders, and will feature complete sets and all-new production from both bands and an arsenal of their hits such as “Pour Some Sugar on Me,” “Lights,” “Photograph,” “Don’t Stop Believin’,” “Rock of Ages” and “Faithfully.”

Neal Schon said, “These co-headlining Journey/Def Leppard dates will be epic classic rock shows. So many hits. It will be great to see you all, friends!”

Said Joe Elliott, “This tour is going to be a blast! We’ve toured together before and it was massive.  This time it’s going to be even bigger and better!”

Jonathan Cain added, “We are all anxious to share our sound with the world again and, along with Def Leppard, we are part of a world-class package to the rock stage that spans decades and represents a multi-platinum legacy.”

Added Rick Savage of Def Leppard, "12 years ago we embarked on a US tour with Journey and it was an absolute blast. Looking forward to hooking up again. Believe me, this will be even more spectacular."

Journey – Neil Schon (founding member and lead guitarist), Ross Valory (co-founding member and bassist), and longtime members Jonathan Cain (keyboardist), Steve Smith (drummer) and Arnel Pineda (lead singer) - is one of the most popular American rock bands of all time, creating some of the best-known songs in modern music, with iconic hits such as “Lights,” “Faithfully,” “Any Way You Want It,” “Wheel In The Sky,” “Separate Ways,” “Who's Crying Now” and the seminal “Don’t Stop Believin’,” which is the top-selling digital catalog track in history. Since the group’s formation in 1973, the band has earned 19 top 40 singles and 25 Gold and Platinum albums and has sold nearly 100 million albums globally.  Their Greatest Hits album is certified 15 times-Platinum, bringing Journey into the elite club of Diamond-certified award holders. The band continues to tour and record into the 21st century, performing concerts for millions of fans worldwide and received the prestigious Billboard "Legends of Live" touring award.  Journey received a star on the Hollywood Walk of Fame, was inducted into the Hollywood Bowl Hall of Fame and is the subject of the award-winning documentary, Don’t Stop Believin’: Everyman’s Journey.  In 2017, Journey was inducted into the Rock and Roll Hall of Fame.

With more than 100 million albums sold worldwide and two prestigious Diamond Awards in the U.S., Def Leppard - Joe Elliott (vocals), Phil Collen (guitar), Rick "Sav" Savage (bass), Vivian Campbell (guitar) and Rick Allen (drums) — continue to be one of the most important forces in rock music. Over the course of their career the band has produced a series of classic ground-breaking albums that set the bar for generations of music fans and artists alike. The group’s spectacular live shows and arsenal of hits have become synonymous with their name, leading Def Leppard to be heralded as an institution in both the music and touring industry. Def Leppard’s influential career includes numerous hit singles and ground-breaking multi-platinum albums—including two of the best-selling albums of all time, Pyromania and Hysteria, capturing the group’s legendary tracks, bringing together classic Leppard hits such as “Rock of Ages,” “Pour Some Sugar on Me” and “Foolin.” The band’s most recent self-titled studio album debuted at #1 on Billboard’s Top Rock Albums and Top Independent Albums charts. The album also took the #5 spot on Billboard’s Top Current Albums and #10 spot on the Top 200, as well as claiming 15 top 10 debuts around the world. For the first time, in January 2018 Def Leppard debuted their full recording catalog worldwide via streaming and download platforms, listen HERE.

Tickets can be purchased at Tickets.com and the Comerica Park box office. To charge tickets by phone, call 866-66-TIGER.