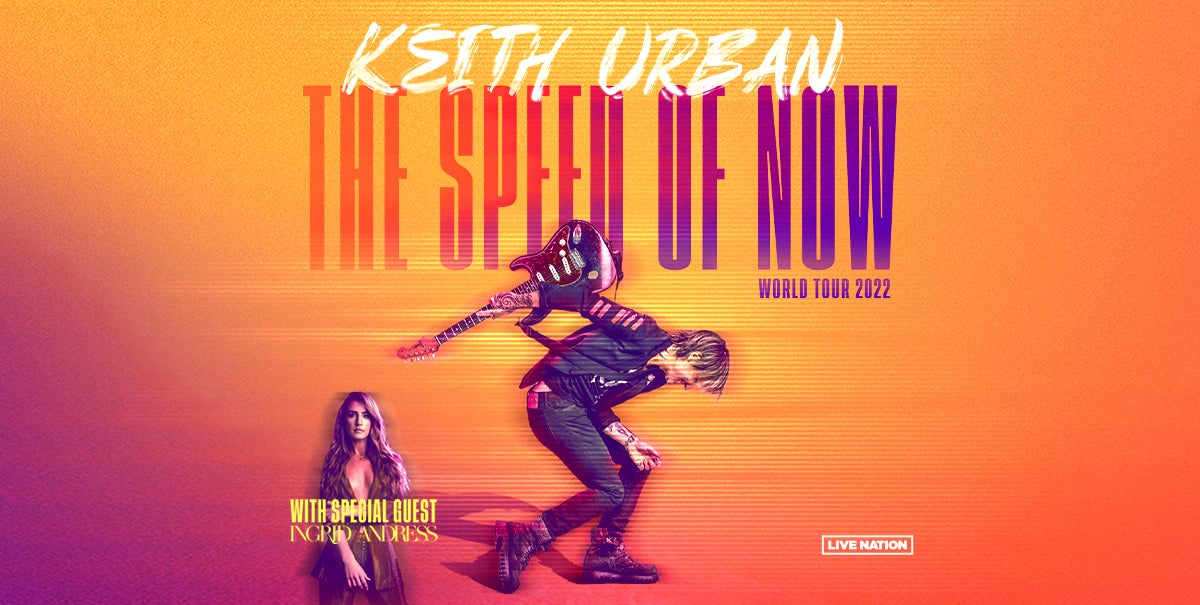 “Every night is the first time we’ve played these songs for that audience, in that moment,” says Urban.  “It’s why every show is different – spontaneous and unpredictable – even for us!” He adds, “After two years we’re finally gonna get the chance to play some of the new songs we haven’t done live before. We’ll throw in a bunch of the songs that everyone comes to hear, a couple of which we’ll rework a bit, and it’s really gonna be tough to get us off the stage.”

“I’ve always considered myself a live performer first,” says Urban. “It’s what I’ve always done and it’s what my music needs to live and breathe. Our shows are all about living in the moment. They’re a totally interactive and immersive experience where everyone can participate in whatever way they want – sing, dance, do whatever.”

Critics from around the globe have hailed Urban’s concerts as ones “not to be missed,” as unpredictable as they are explosive.  Combine his infectious showmanship, virtuoso guitar playing, effortless spontaneity with a fist-pumping, arena-ready arsenal of hits and “The Speed Of Now World Tour” promises to be one of the concert event of the Summer.

But what lies at the heart of every great show are the songs. “Blue Ain’t Your Color,” “The Fighter,” “Somewhere In My Car,” “Wasted Time,” “Somebody Like You,” “Long Hot Summer,” his latest single “Wild Hearts,” and his global smash “One Too Many” with P!NK, will anchor a night of music from one of the touring world’s best.

The tour includes Urban’s first concerts in Ft. Worth and Savannah, his first appearances at venues in Los Angeles and Jacksonville, as well as shows in Knoxville, Charleston and Madison where he hasn’t played in nearly a decade.

More About Keith Urban
Keith Urban has spent the better part of his life harnessing a passion for music.  This helps to understand why he is one of the most successful and well-respected artists in the world.  He’s won four GRAMMY© Awards, thirteen CMAs, 15 ACMs, three AMAs, two People’s Choice Awards and celebrated nine consecutive gold, platinum or multi-platinum albums. His musical virtuosity and fluidity has made him the musician’s musician. He’s collaborated with a diverse group of artists that include, among others; Billy Gibbons, Buddy Guy, H.E.R., Carrie Underwood, Chris Stapleton, Eric Church, John Mayer, Julia Michaels, Justin Timberlake, Dzeko, Miranda Lambert, Nile Rodgers, Post Malone, Taylor Swift, The Rolling Stones and Vince Gill.

More About Ingrid Andress
Three-time Grammy© nominated singer-songwriter Ingrid Andress released her debut album Lady Like in 2020, which set the record as the highest streaming country female debut album of all time upon release. Lady Like features her multi-platinum No. 1 radio single “More Hearts Than Mine,” which also made history as the only debut single from a solo female artist to break the Top 20 on country radio in 2019. At last year’s Grammy Awards, Andress was the only country artist to be nominated in a “Big Four” category and tied as the most-nominated country artist overall. Along with critical acclaim from V Magazine, NYLON and Rolling Stone, Andress’ latest release, “Wishful Drinking” (with Sam Hunt) debuted on Spotify’s Top Songs chart and has earned more than 40 million streams to date. With over 730 million global streams, Andress is currently on the road with her own U.S. and European headlining tour in between opening for country duo Dan + Shay.