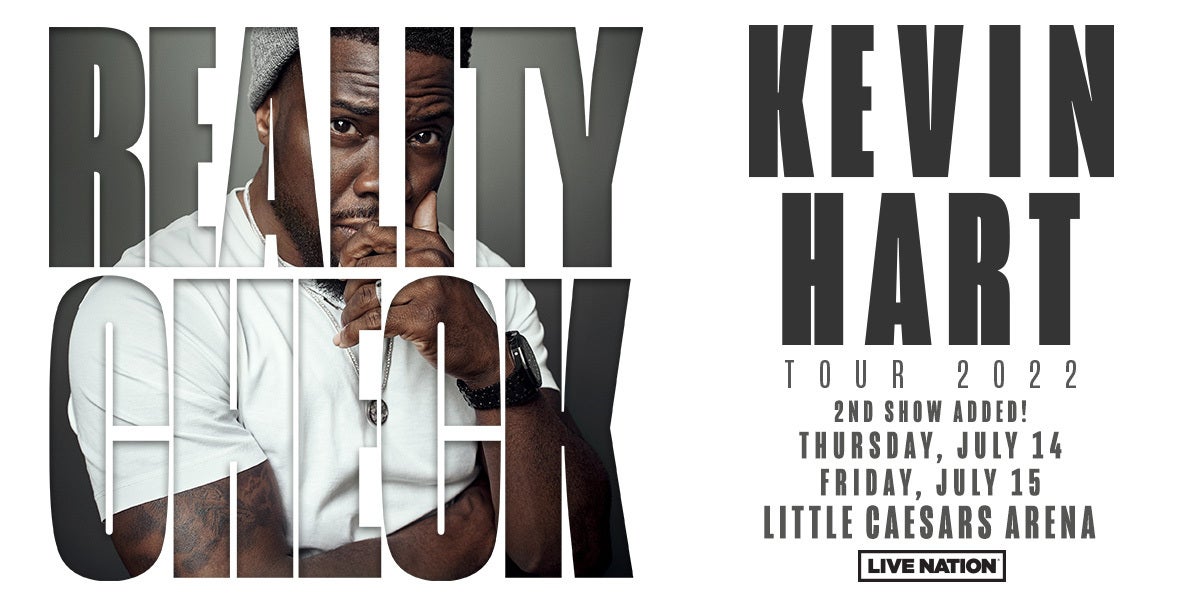 “I am hype as shit to go back out on tour. There is nothing better than making people laugh, I can feel the energy in the venues like caffeine pumping through my veins. I’ve been cooking up something special and have thoughts I need to get off my chest. Go get your tickets and come ready to have a good night!” said Kevin Hart.

Hailed as one of the highest-earning stand-up comedians of 2019 by Forbes, Hart’s most recent global comedy tour sold out over 100 arenas around the world, and sold over one million tickets worldwide in 2018 during his “Irresponsible Tour.” Hart continued to break records with his hometown stand-up performance at Philadelphia’s Lincoln Financial Field during his “What Now Tour,” marking the first time a comedian sold out an NFL stadium in Philadelphia.

This event will be a phone-free experience. Use of phones will not be permitted in the performance space.

Upon arrival at the venue, phones will be secured in individual Yondr pouches that will be opened at the end of the event. Guests maintain possession of their devices at all times, and can access them throughout the event only in designated Phone Use Areas within the venue. All devices will be re-secured in Yondr pouches before returning to the performance space.

All pouches and equipment are routinely sanitized. The Yondr staff is trained and required to follow safety guidelines and hygiene protocols to practice social distancing, minimal contact and wear required personal protective equipment.

Anyone seen using a device during the performance will be escorted out of the venue by security. We appreciate your cooperation in creating a phone-free experience.

Emmy & Grammy® nominated Kevin Hart was born and raised in Philadelphia, Pennsylvania where he launched his career as a comedian during an amateur night at a local comedy club. Over the years Hart has become Hollywood’s box office powerhouse, opening 10 films at number one at the box office with $4.23 billion revenue at the global box office. Hart is the Founder of three companies where he is actively building an eco-system and incubator for extraordinary growth and creativity.

Hart is the Chairman of his digital network, the Laugh Out Loud Network. LOL serves as a platform for emerging comedians and is home to two premium series which both feature Kevin – What the Fit? and Cold as Balls.

Hart is the CEO of HartBeat Productions. HBP is a multi-platform production company creating unique content for worldwide audiences. Both Kevin and HartBeat have a first-look production deal with Netflix, together the two companies will produce feature films and Kevin will star in four of those films.

Hart is the Founder and CEO of HartBeat Ventures. HBV is Kevin’s VC, and its mission is to invest in disruptive companies, specifically companies that can help elevate underserved communities by providing a platform for everybody to thrive. HBV has invested in over 30 companies since its launch in 2019.

Hart continues to develop, star, and produce feature films and television via HartBeat and Laugh Out Loud. Hart can currently be seen starring in the HartBeat produced dramatic limited series True Story for Netflix which has been watched by over 60 million users worldwide.

In 2021 Hart starred and produced via HartBeat the feature film Fatherhood. The movie has been watched by more than 91 million accounts globally making it one of the most successful original dramatic movies on Netflix. On the small screen, Hart starred in and produced Motor Trend’s “Kevin Hart’s Muscle Car Crew”, and “Celebrity Game Face” for E! Additionally, Hart can be seen on two original programs on Peacock: his first ever talk show “Hart to Heart” and the ‘Olympic Highlight” show which he stars opposite Snoop Dog. Both shows have received critical acclaim and praise for both Hart and LOL.

Hart recently wrapped production on two films, Lionsgate’s science-fiction-action-comedy, Borderlands, which he stars opposite Cate Blanchett. Along with Netflix’s Me Time which pairs Kevin and Mark Wahlberg for the first time. Later in 2022 Hart can be seen in Sony’s action-comedy, The Man from Toronto, starring alongside Woody Harrelson and Kaley Cuoco.

In 2020 Hart released his seventh hour long stand-up special, Zero Fu**ks Given, which quickly became Netflix's biggest stand-up special of 2020 and earned him a Grammy® nomination for “Best Comedy Album.” Hart also starred in and produced Die Hart, the first production of its kind, created through his digital network, Laugh Out Loud, and Executive Produced through HartBeat Productions. In 2021 Kevin was nominated for an Emmy award for “Outstanding Actor in a Short Form Comedy or Drama Series.”

In December 2019, Hart’s Emmy nominated Docu-series, Don’t F**k This Up, was released on Netflix. The intimate six-part series follows Hart’s life over the previous year, giving viewers an inside look to the events that shaped his life. Hart’s other recent box-office credits include Jumanji: The Next Level, The Secret Life of Pets 2, and The Upside. In 2018, Hart co-wrote, produced, and starred in Universal’s Night School, all under Hartbeat Productions. In 2017, Hart starred in Jumanji: Welcome to the Jungle, his highest grossing movie to date. Hart’s previous credits include Central Intelligence, The Secret Life of Pets and the Ride Along films.

Hart’s last global live standup comedy tour was “The Irresponsible Tour,” which was also released as an original Netflix standup special in April 2019. Additionally, his 2017 standup tour, “What Now,” grossed over $100 million worldwide and culminated in a performance to a sold-out crowd at Philadelphia’s NFL stadium.

Kevin is a New York Times Best Selling author twice over. His new book, Markus Makes a Movie debuted at number six on the coveted list and remained on the list for three weeks.

I Can’t Make This Up, debuted at number one on The New York Times Best Sellers List and remained on the Top 10 Nonfiction Hardcover Bestsellers List for 10 weeks straight. Hart’s first Audible original, The Decision, was nominated for an Audie award for “Best Original Audiobook in 2021.”

In the audio space, Hart can be heard bi-weekly on his radio talk show, Straight from the Hart, which airs on Sirius XM’s Laugh Out Loud Radio (channel 96). In 2019, Straight from The Hart became available on Pandora and now ranks as the #1 podcast across all genres. Hart can also be heard on his weekly Sirius podcast, Comedy Gold Minds.