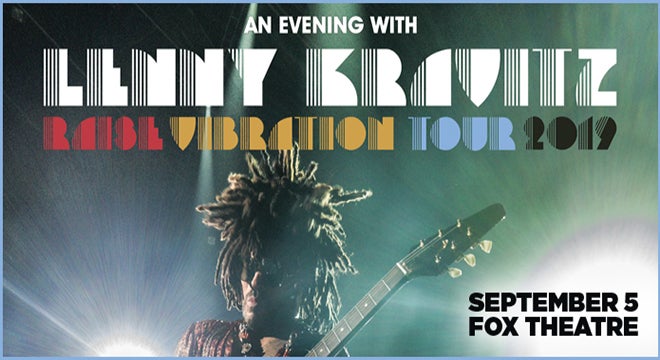 (DETROIT – May 6, 2019) – Extending a monumental two-year world tour, Lenny Kravitz returns to the road in North America on August 21. He announces a monthlong run across the continent and trekking through major markets coast-to-coast to include the Fox Theatre in The District Detroit on Thursday, September 5 at 8 p.m.

American Express® Card Members can purchase tickets in select markets before the general public beginning Tuesday, May 7 at 10 a.m. local time through Thursday, May 9 at 10 p.m. local time.

Known for undeniable, energetic gigs, this North American run promises to uphold his live legacy yet again. Lenny Kravitz elevates the union of rock ‘n’ roll, funk, blues, and soul once again on his eleventh full-length album, Raise Vibration. Receptive to youthful inspiration, but enlightened by three decades of wisdom, it represents a powerful creative rebirth and a bold, bright, and brilliant body of work befitting of his legacy and boundless spirit.

Regarded as one of the preeminent rock musicians of our time, Lenny Kravitz has transcended genre, style, race and class over the course of a 20-year musical career. Reveling in the soul, rock and funk influences of the ‘60s and ‘70s, this writer, producer and multi-instrumentalist has won four consecutive Grammy® Awards, as well as set a record for the most wins in the “Best Male Rock Vocal Performance” category. In addition to his ten studio albums, which have sold 40 million worldwide, this multidimensional artist has segued into film, appearing as Cinna in the box-office hits, The Hunger Games and The Hunger Games: Catching Fire. Kravitz can also be seen in the critically-acclaimed films Precious and The Butler. His creative firm Kravitz Design Inc, touts an impressive portfolio of noteworthy ventures, with a range that includes hotel properties, condominium projects, private residences, and high-end legendary brands like Rolex, Leica and Dom Perignon.