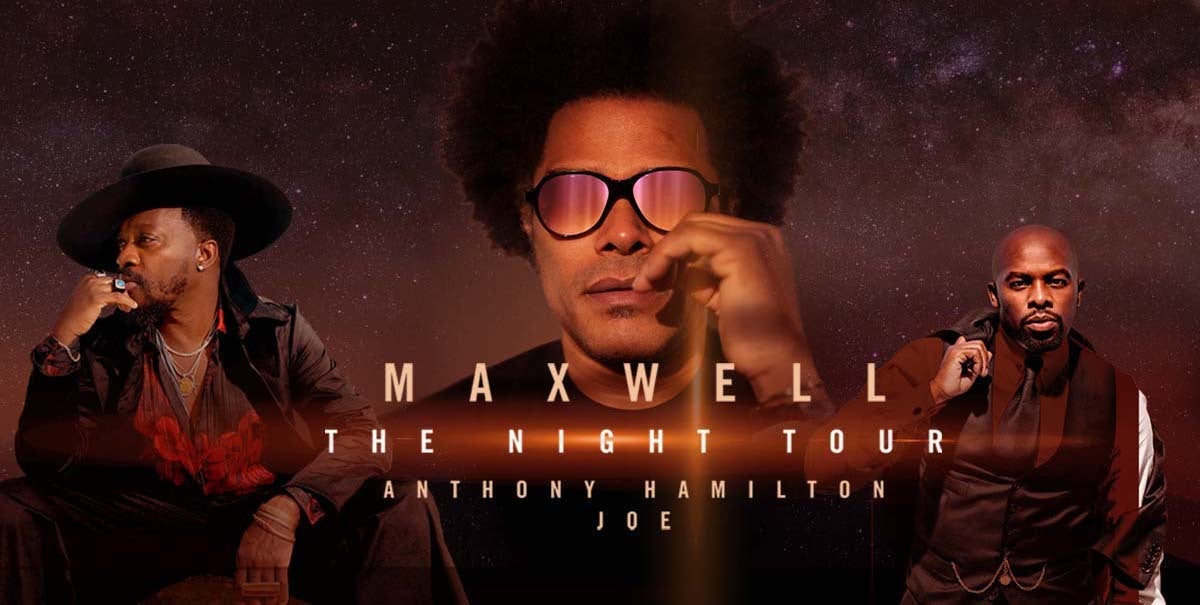 In support his upcoming album, Maxwell brings the “NIGHT 2022 Tour” across North America in partnership with the Black Promoters Collective – the preeminent coalition of African American independent promoters. The 25-date run includes a stop at Little Caesars Arena with special guests Anthony Hamilton and Joe on Sunday, April 10 at 7 p.m. "NIGHT 2022 Tour" at Little Caesars Arena is presented by MIX 92.3.

Preparing to deliver one of the most-anticipated R&B events of next year, three-time GRAMMY® Award-winning multiplatinum artist Maxwell announces his new full-length album, blacksummers’NIGHT, out Spring 2022. It notably marks his first release under a newly minted deal with BMG and closes out the trilogy he began with the #1 GRAMMY® Award-winning epic, BLACKsummers’night, in 2009.

Maxwell says: “From announcing a new partnership with BMG for my label Musze to receiving the Legend Award at the upcoming 2021 Soul Train Awards, I couldn’t be more excited to share this new single with loved ones offering a glimpse into NIGHT…”

“Maxwell is one of the most respected artists in the industry,” says Gary Guidry, CEO, Black Promoters Collective. “His body of work and showmanship are second to none. We believe he has a true connection to the culture. We are happy to partner with him on the NIGHT 2022 Tour and look forward to growing this relationship for years to come.”

“Maxwell’s music has been the soundtrack to many of our lives,” continues Shelby Joyner, president, Black Promoters Collective. “Right now, people are ready to return to live music and regain a sense of normalcy. As a partner, we look forward to not only promoting the NIGHT 2022 Tour, but also creating space for Maxwell’s fans to safely listen to and enjoy the music they love so much.”

Maxwell will also be receiving the “Legend” Award at the upcoming 2021 Soul Train Awards.

blacksummers’NIGHT closes out a journey Maxwell first embarked upon over a decade ago. 2009’s BLACKsumers’night bowed at #1 on the Billboard Top 200, earned a platinum certification, and garnered GRAMMY® Awards in the categories of “Best R&B Album” and “Best Male R&B Vocal Performance” for “Pretty Wings.” In 2016, the sequel blackSUMMERS’night captured #3 on the Top 200, marking his fourth Top 10 debut overall. The album also earned a coveted “Best New Music” classification from Pitchfork in addition to 4-out-of-5 stars from Rolling Stone, 3.5-out-of-4 stars from USA Today, and A- from Entertainment Weekly. Meanwhile, “Lake By The Ocean” received “Best R&B Song” at the 2017 GRAMMY® Awards.

Maxwell has artfully managed to transfix music lovers for more than two decades, releasing five studio albums, all in his own time and all duly anointed as classics. The soul singer redefined soul music in April of 1996 when he released his critically acclaimed debut on Columbia, 'Maxwell's Urban Hang Suite.' It earned Grammy nominations, double platinum status and RIAA gold for the single, "Ascension (Don't Ever Wonder)." The platinum albums 'Embrya' (1998) and 'Now' (2001) followed. After eight years, 2009's 'BLACKsummers'night' debuted at No. 1 on the Billboard 200 and won two Grammys, including Best R&B Album. To date, Maxwell has achieved 4 platinum album certifications from the RIAA. His last album ‘blackSUMMERS’night,’ the second installment of his musical trilogy, earned Maxwell his third Grammy (Best R&B Song for “Lake By The Ocean”) an NAACP Image Award (Outstanding Male Artist), and a Soul Train Award (Best R&B/Soul Male Artist).

About the Black Promoters Collective The Black Promoters Collective (BPC) is a coalition of six of the nation’s top independent concert promotion and event production companies. As a 100% Black -owned business, their mission is to be the world’s leading producer and provider of culturally relevant live entertainment experiences. To learn more, visit http://www.blackpromoterscollective.com.