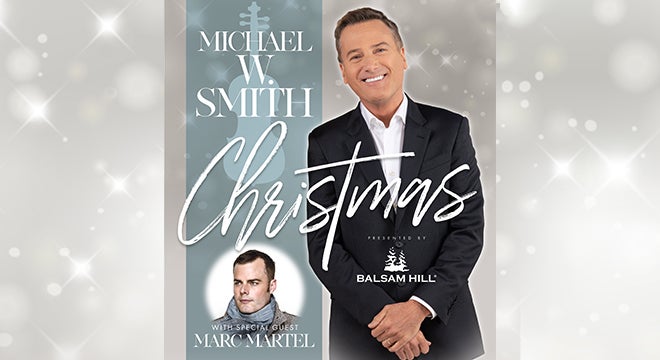 In addition to the performance, and in support of his longstanding relationship with Compassion International, Michael is exclusively meeting fans who sponsor a child through the organization prior to the concerts through the website www.meetmichaelwsmith.com. This “Compassion Meet & Greet” is an opportunity to learn more about the Compassion International’s child sponsorship experience and will include a photo and Meet & Greet opportunity with the artist. (Tickets to each concert must be purchased separately through the event’s normal ticketing outlets.) Michael W. Smith and Marc Martel are also participating in the Sixth Annual Balsam Hill Celebrities for Smiles Charity Auction, where the public can bid on one-of-a-kind, celebrity-autographed, beautiful holiday ornaments on an eBay auction at www.CelebritiesforSmiles.com. All proceeds will benefit Operation Smile, an international medical charity that offers free cleft lip and cleft palate surgeries to children and young adults all around the world.

For more information on the upcoming tour and to purchase tickets, visit MichaelWSmith.com/Tour

Michael W. Smith has been releasing new music regularly and performing around the world to sold-out crowds for the last 35+ years. During his storied career, he’s written over 35 #1 songs, been honored with three Grammy® Awards and 45 Dove Awards, one American Music Award, was inducted into the Gospel Music Hall of Fame and has sold more than 15 million albums. His most recent USA Today, Yahoo! Music and Billboard-acclaimed studio album A Million Lights and Parade, Good Morning America-featured and Grammy® nominated live worship album Surrounded have together become his 30th and 31st Top 10 hits on Billboard’s Top Christian Albums chart, more than any other solo artist in history. He’s also given back to the global community. Smith has raised funds to battle AIDS in Africa; started Rocketown, a safe haven for young people in Tennessee to meet and find hope; and has helped more than 70,000 children through Compassion International. He has also written several bestselling books, including Old Enough To Know and Friends Are Friends Forever. Michael W. Smith’s heavily praised Michael W. Smith & Friends: The Spirit of Christmas features collaborations with Vince Gill, Lady Antebellum, Little Big Town, Martina McBride, Carrie Underwood, Jennifer Nettles, Bono, Michael McDonald and Grant. For more information, visit www.michaelwsmith.com.

Long before his YouTube videos went viral, spawning an appearance on The Ellen DeGeneres Show and a performance with the surviving members of Queen on American Idol, Marc Martel spent 13 years recording and touring the globe with Canadian rockers Downhere. After hearing about a contest spearheaded by the actual members of Queen, the front man almost passed on the opportunity to enter, but with some prodding, he casually cut a version of “Somebody To Love” in 2011, and now 30 million cumulative YouTube and Facebook views later, Martel was declared the victor. Fast forward to 2019, and Martel has forged for himself a unique and diverse career. Amongst other accolades, he started his own Queen tribute show called The Ultimate Queen Celebration, which tours all over the world, including an upcoming Germany/Austria/Switzerland run in 2020. In 2018 Martel was called upon to be one of the voices of Freddie Mercury in the Twentieth Century Fox film, “Bohemian Rhapsody”, which has not only opened up touring opportunities that have brought him all over playing to sold out crowds, but has led to features by the New York Times, Good Morning America, and hundreds of other publications.