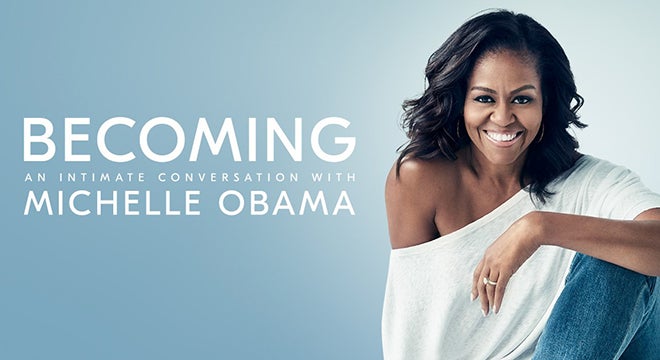 Live Nation and the Crown Publishing Group, a division of Penguin Random House, announced the fall 2018 dates for Michelle Obama’s live U.S. book tour events in support of her highly anticipated memoir, BECOMING, to include Little Caesars Arena on Tuesday, December 11 at 8 p.m. Produced by Live Nation, the 10-city U.S. tour will kick off in Mrs. Obama’s home town of Chicago on Tuesday, November 13, and will feature intimate and honest conversations between Mrs. Obama and a selection of to-be-announced moderators, reflective of the extraordinary stories shared in the wide-ranging chapters of her deeply personal book.

Simultaneous to this announcement, Mrs. Obama released a video over her social media channels, watch HERE.

Attendees will hear firsthand Mrs. Obama’s intimate reflections on the experiences and events, both public and private, that have shaped her, from her childhood on the South Side of Chicago to her years as an executive balancing the demands of motherhood and work, to her years spent at the most famous address in the world. Michelle Obama has emerged as one of the most iconic and compelling women of our era. As First Lady of the United States of America – the first African-American to serve in that role – she helped create the most welcoming and inclusive White House in history, while also establishing herself as a powerful advocate for women and girls in the U.S. and around the world.

In candidly recounting moments from her own extraordinary journey, Mrs. Obama will also share life lessons learned and inspire people to become the very best version of themselves.

Michelle Obama and Live Nation will also be donating 10 percent of every show’s tickets to various organizations including, but not limited to, local charities, schools, and community groups in each city the tour visits. Those fans will receive free admission to the tour stop in their city.

“I’ve spent the last year and a half reflecting on my story as deeply and honestly as I could, and now I’m thrilled to travel the country and do the same with readers this fall,” said Michelle Obama about her upcoming tour. “I hope that this tour will inspire others to reflect upon and share their own stories—all the joys and sorrows, all the scars and renewals—so that together, we can better recognize that each of us, in our own way, is in a constant process of becoming.”

“We are honored to be part of these special events with former First Lady Michelle Obama,” said Tara Traub, Senior Vice President of Live Nation Touring. “Hearing her share her story in person will be a memorable life experience for attendees of the Becoming tour and one that will help encourage people to find their own voice and pursue their dreams for a better future—for themselves, their families, and their communities.”

BECOMING will be released on November 13 in the U.S. and Canada by the Crown Publishing Group, a division of Penguin Random House, as well as in 28 languages around the world. An audio edition of the book, read by Mrs. Obama, will be simultaneously issued in digital and physical formats by Penguin Random House Audio.