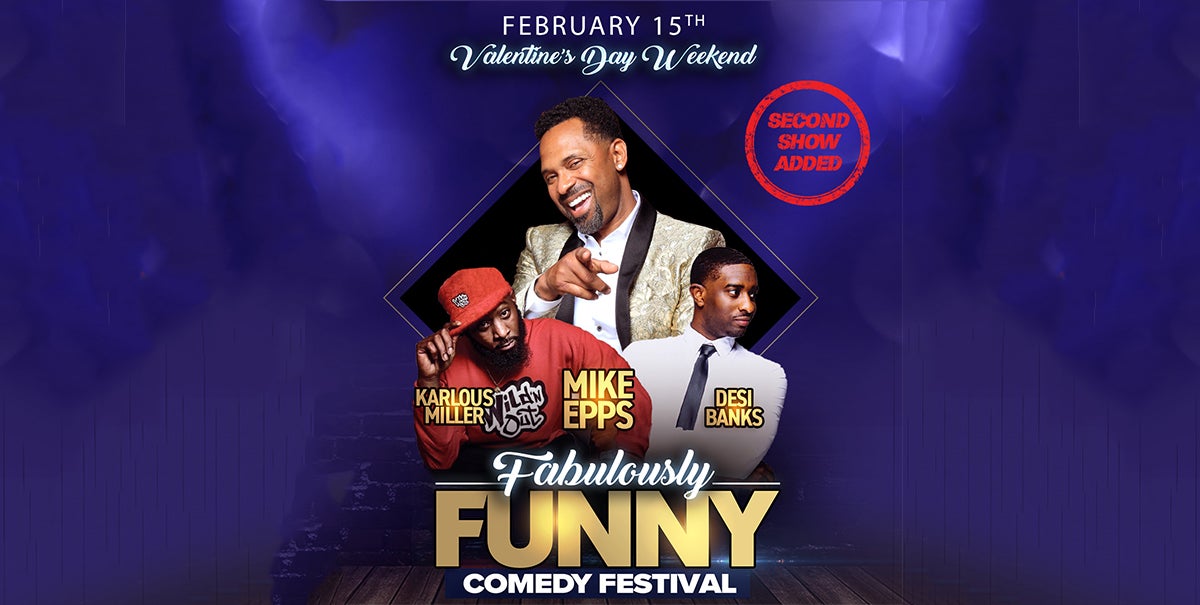 Comedy heavyweight Mike Epps brings “The Fabulously Funny Comedy Festival” to Fox Theatre in The District Detroit for back-to-back performances on Saturday, February 15 at 7 p.m. and 10:30 p.m. Epps will lead the show with an all-star lineup including Karlous Miller and Desi Banks. The celebrated entertainers will bring down the house with their sharp wit, unbridled humor and hysterical storytelling for a comedy show fans won’t want to miss. Line-up subject to change.

Highly praised for his performance in the Netflix comedy Dolemite Is My Name starring opposite Eddie Murphy, Epps is generating an extraordinary amount of buzz among his peers for being not only one of the funniest comic actors in town, but also for his burgeoning dramatic talent. This summer, Epps released his latest standup special Mike Epps: Only One Mike (Netflix), and dropped his single “We Goin’ Out” feat. Big Boi and Sleepy Brown. Up next, Epps  will be starring in the Netflix comedy series The Upshaws with Wanda Sykes, The House Next Door, sequel to the 2016 film Meet The Blacks and Last Friday.

Mike Epps has generated an extraordinary amount of buzz among his peers within the entertainment industry for being one of the funniest comic actors to emerge in the Hollywood scene. During a performance at LA’s Comedy Store, Epps caught the attention of Ice Cube. This led to the first of three feature films they would do together: the cult hits Next Friday, Friday after Next and All About the Benjamins. Other features include the Hangover franchise, Girls Trip, Faster, Hancock, Lottery Ticket, Next Day Air, Roll Bounce, The Fighting Temptations, the Resident Evil franchise, Bait, How High, Dr. Dolittle 2, Talk to Me and Guess Who?

Karlous Miller is a comedian and actor most known for being a veteran cast member on MTV's Wild ’N Out with Nick Cannon. Appearances also include Last Comic Standing (NBC), Joking Off (MTV), Comic View (BET), to name a few. Every week, Karlous hosts the hit “85 South Show” podcast with DC Young Fly, which has gained a fanbase across the globe.

Desi Terrell Banks, Jr. is an actor, comedian, and digital genius on the path to becoming one of his generation’s top rising stars. His quick rise to fame has solidified him as one of the most influential influencers of his time. Desi’s innate ability to relate to audiences has contributed to his fan base exceeding over 4 million followers on Instagram, Facebook, and Twitter combined.