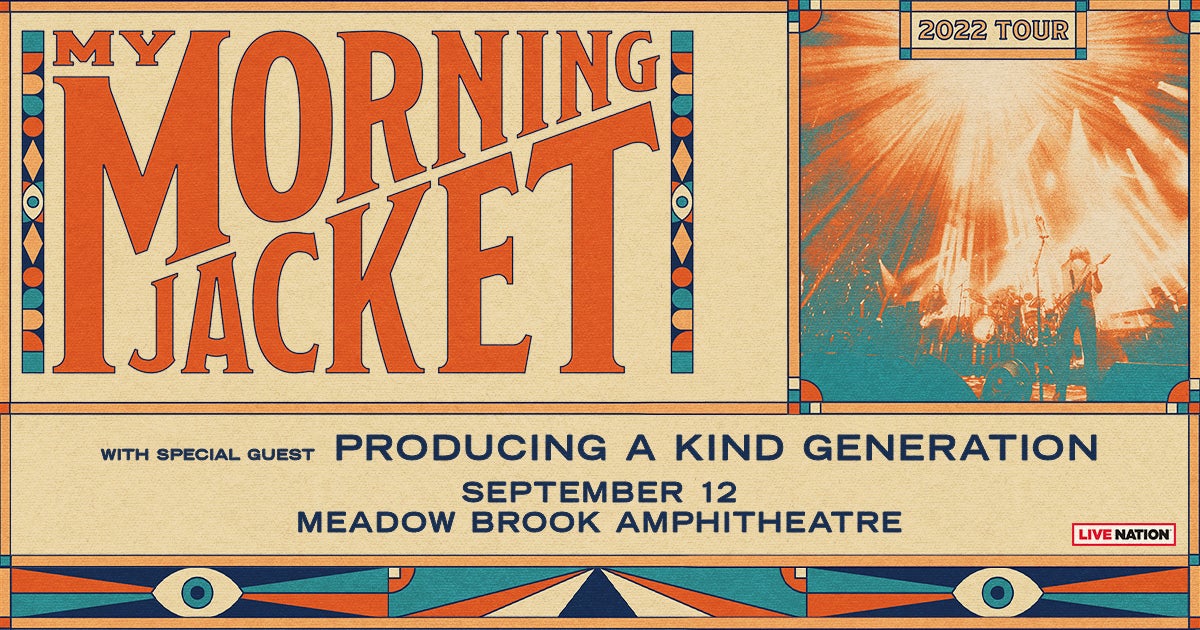 Due to illness, My Morning Jacket scheduled for Tuesday, June 28 at Meadow Brook Amphitheatre on the campus of Oakland University has been rescheduled to Monday, September 12 at 7 p.m.

Once again, My Morning Jacket has partnered with PLUS1 with $1 from each ticket supporting non-profits working to secure social justice, ensure mental health care for all, and confront the climate crisis.

The tour begins April 19 at Memphis, TN’s Orpheum Theatre and then continue through September. Special guests throughout the tour will include Madison Cunningham, Indigo De Souza, and Joy Oladokun.

The upcoming dates see My Morning Jacket continuing to celebrate last year’s acclaimed new album, My Morning Jacket. Produced and engineered by Jim James over two multi-week sessions at Los Angeles, CA’s 64 Sound, My Morning Jacket is the band’s ninth studio album and reaffirms the rarefied magic that’s made My Morning Jacket so beloved, embedding every groove with moments of discovery, revelation and ecstatic catharsis. The album made an explosive chart debut upon its October release, arriving at #1 on Billboard’s “Top Vinyl” along with #3 on both “Top Rock Albums” and “Independent Albums.”

Highlights include a very special pair of shows in Louisville, KY – My Morning Jacket’s first hometown live dates in six years. The weekend will feature amazing Louisville musicians and local eateries while also shining a light on non-profits doing incredible work in the Derby City, beginning Friday, June 24 with an intimate concert at Iroquois Amphitheater, with proceeds supporting Change Today, Change Tomorrow (CTCT), a Louisville-based non-profit working to fight racial injustice in education, access to healthy food, and proper health care; special guests include River City Drum Corps and Kiana & the Sun Kings. On Saturday, June 25, My Morning Jacket will then headline Louisville’s Waterfront Park, with support from Louisville Leopard Percussionists and Producing a Kind Generation. Tickets for June 24 will be available exclusively as an added option bundled with purchase of tickets for Waterfront Park – standalone tickets will not be available.

Next month will see the eagerly anticipated return of My Morning Jacket’s One Big Holiday, an all-inclusive concert vacation set for March 2-5 at the Moon Palace Cancún resort in Riviera Cancún, Mexico. Presented in partnership with CID Presents, the fourth iteration of One Big Holiday will see My Morning Jacket performing three nights at a one-of-a-kind beachfront concert venue specially reimagined for the event. One Big Holiday will also include performances by some of the band’s favorite artists and pals, including Lord Huron, Brittany Howard, Black Pumas, Sharon Van Etten, Trampled By Turtles, Preservation Hall Jazz Band, Steel Pulse, Fruit Bats, Washed Out, Strand of Oaks, and more. A limited range of all-inclusive One Big Holiday packages remain available – for complete information, please visit mmjonebigholiday.com.

PRAISE FOR MY MORNING JACKET:

“Its killer ninth album, My Morning Jacket, is an 11-song set that channels

an energy as loose and loud as their bombastic live act.”

"What keeps MMJ interesting is that their music never becomes too comfortable.

It’s a spectacular vision where nothing ever seems quite settled."

“In many ways, the release feels like a line in the sand, an obvious new

beginning…Musically, they honed in on core elements of their identity…Back in 2011, the

quality to the album, with several songs you could easily imagine deriving from various

"The loneliness of modern existence is one of the focuses on the new album, as is the

healing power of love, with both forces expressed through the music and necessary to

the creation of it."

"The most live-sounding studio LP of their career...capturing the unbridled energy and

adventurous, journeyman spirit that made them the rare act to hold dual-citizenship

at Coachella and Bonnaroo back when those festivals felt worlds apart."

"My Morning Jacket is a band, maybe the last band, in these cynical end times...MMJ

feels like the last child, a rock and roll bastard living out its own mythology one album,

one tour, one show, one solo, one encore at a time. We’re living in their narrative. We’re

“My Morning Jacket has every mark of a great MMJ album: widespread jam numbers,

thoughtful lyrics that speak to the times, and a brush with the psychedelic.”

"My Morning Jacket is MMJ's most satisfying work since 2008's Evil Urges, and a

splendid example of what can happen when their group mind is in sync."

transcendental. It is a miracle they pull off frequently on 'My Morning Jacket',

with confidence and inspiration, every moment a fresh beginning.”