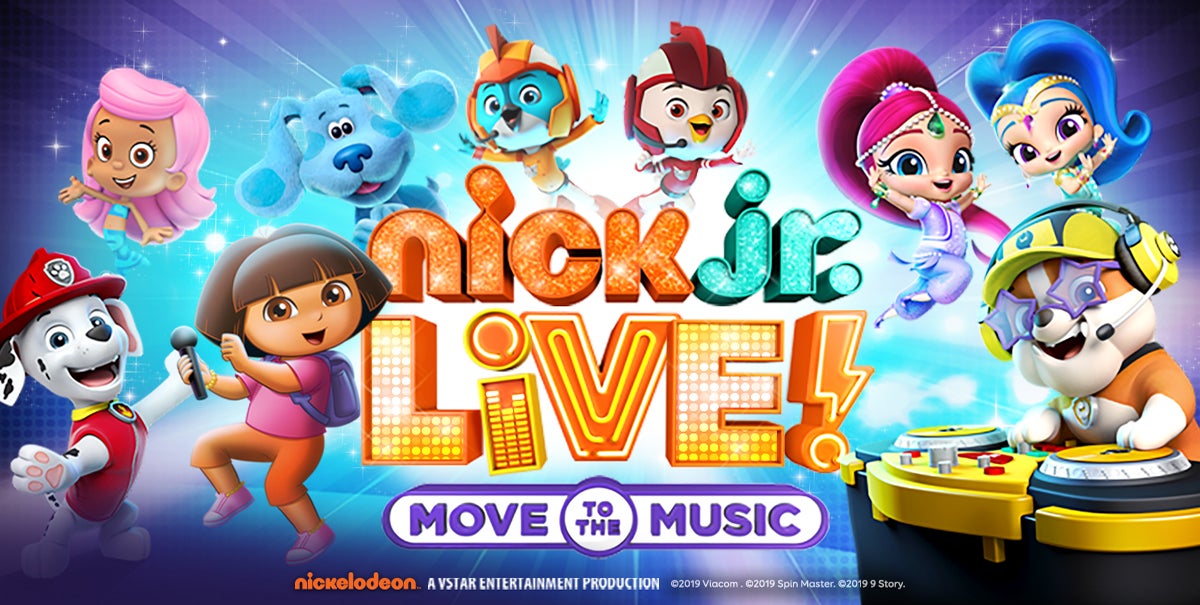 Sing, clap, dance, and move to the music with all your favorite Nick Jr. friends!  Nickelodeon and VStar Entertainment Group present Nick Jr. Live! “Move to the Music,” an all-new, one-of-a-kind adventure. For the first time on stage together, this musical spectacular features characters from multiple Nick Jr. hit animated series, including Bubble Guppies, PAW Patrol (produced by Spin Master Entertainment) , Dora The Explorer, Shimmer and Shine, Blue’s Clues and You, Blaze and the Monster Machines and Top Wing. Families will have the opportunity to make lifelong memories together at any of the six performances at the Fox Theatre in The District Detroit from Friday, March 6 through Sunday, March 8.

Nick Jr. Live! “Move to the Music” follows Dora and her PAW co-hosts, Marshall and Rubble, as they invite their Nick Jr. friends to come together for a music-filled production. Bubble Guppies’ Molly and Gil, Rod and Penny from Top Wing, Shimmer and Shine, and even Blue from the new Blue’s Clues &You! are throwing a Nick Jr. celebration. Audiences will be transported to familiar Nick Jr. locations, including Bubbletucky and Zahramay Falls. The unforgettable celebration will feature live appearances, special on-screen guests and audience participation to engage the whole family.

With innovative costuming and a Broadway style set, Nick Jr. Live! is a perfect way to introduce theater to young children. The show is split into two acts with an intermission and will include original music as well as familiar tunes from Nick Jr. shows. A limited number of V.I.P. packages are available for each performance and feature premium show seating, VIP merchandise item, an exclusive photo opportunity with Blaze from Blaze and the Monster Machines, as well as a post-show Meet & Greet party with Dora the Explorer and Rubble from PAW Patrol.

Nick Jr. Live! VIPs are treated to premium seating and access to an after-show Meet & Greet with Dora the Explorer and Rubble from PAW Patrol. Plus, get an exclusive photo opportunity with Blaze from Blaze and the Monster Machines! VIPs also receive a VIP merchandise item and souvenir lanyard.