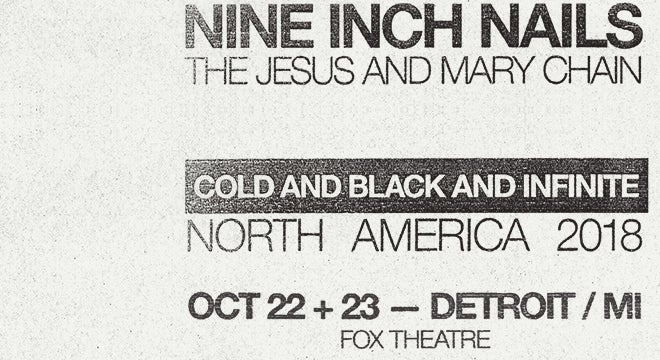 Nine Inch Nails announce “Cold And Black And Infinite North America 2018” with support from The Jesus and Mary Chain and Gabe Gurnsey (Factory Floor) will appear at the Fox Theatre on Monday, October 22 and Tuesday, October 23 at 7 p.m.

Please note, in addition to the prohibited items for the Fox Theatre outlined here (link to prohibited items), the following items will not be permitted for these performances:

The band will bring their "musical, visual, emotional sensory onslaught,” as hailed by The New York Times, to some of the most iconic venues in the USA – including two-night stands at Colorado’s Red Rocks Amphitheatre (September 18 and 19), New York City’s Radio City Music Hall (October 13 and 14) and the Aragon Ballroom in Chicago (October 25 and 26). It will culminate with four shows at the Palladium in Los Angeles (December 7, 8, 11 and 12).

Nine Inch Nails will release Bad Witch on June 22, completing the trilogy that began with 2016’s Not The Actual Events and 2017’s Add Violence. Today, the band revealed the album cover and track listing across its social media platforms.

Bad Witch is now available for pre-order in all formats and limited exclusive merch bundles from https://nin.lnk.to/Music. The track listing is as follows:

Tickets can be purchased at Livenation.com, Little Caesars Arena XFINITY box office and Ticketmaster.com. To charge tickets by phone, call (800) 745-3000. There is a four-ticket limit.