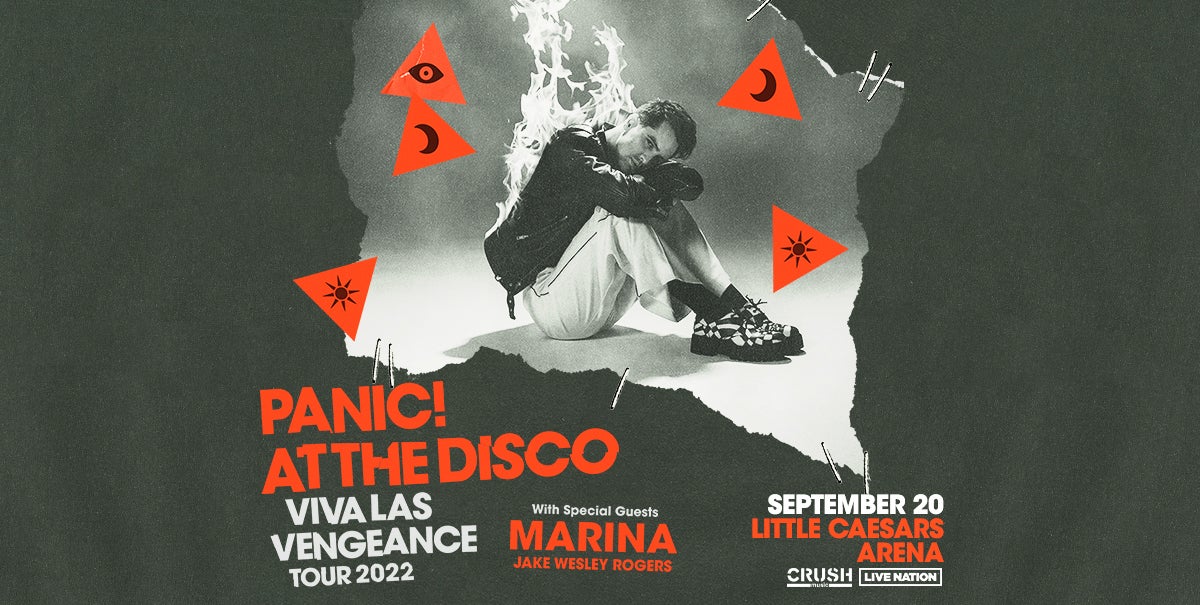 Grammy®-nominated and multi-platinum band, Panic! At The Disco announced “The Viva Las Vengeance Tour”, their global headlining arena run kicking off September 8 in Austin, TX. The world tour will make a stop at Little Caesars Arena with special guests MARINA and Jake Wesley Rogers on Tuesday, September 20 at 7 p.m.

VIVA LAS VENGEANCE shows a change in process for frontman/songwriter Brendon Urie, having cut everything live to tape in Los Angeles alongside his friends and production partners, Jake Sinclair and Mike Viola. The cinematic musical journey is about the fine line between taking advantage of your youth, seizing the day and burning out. The songs take an introspective look into his relationship with his decade plus career including growing up in Las Vegas, love, and fame.

“Viva Las Vengeance is a look back at who I was 17 years ago and who I am now with the fondness I didn't have before. I didn’t realize I was making an album and there was something about the tape machine that kept me honest.” - Brendon Urie

VIVA LAS VENGEANCE marks the first new music from Panic! At The Disco since the 2018 release of their #1 album, RIAA certified platinum-selling Pray For The Wicked, highlighted by the 5x-platinum smash hit “High Hopes” which simultaneously hit #1 across three different radio formats and broke the Billboard record for most weeks atop the Hot Rock Songs Chart! The hit song was nominated for Top Rock Song at the Billboard Music Awards as well as Favorite Pop Rock Song at the AMAs. The album also featured platinum smashes “Hey Look Ma, I Made It,” and “Say Amen (Saturday Night)”. The band’s 2019 sold-out Pray for the Wicked arena world tour sold over 1 million tickets and received critical praise including, “[Urie’s] got the charisma, musical talent and stamina to be one of music’s longest-lasting leading men,” (Variety), “Brendon Urie embodies on-stage theatrics like few other frontmen,” (SF Weekly), and “From dancing fire to a flying piano, Panic! At The Disco puts on a wild show” (Milwaukee Journal Sentinel).

About Panic! At The Disco

Formed in Las Vegas, NV in 2004 Panic! At The Disco are a multi-platinum, Grammy-nominated rock band.  They released their #1 album "Pray For The Wicked" in 2019 off the heels of their critically acclaimed fifth album, "Death Of A Bachelor.” "DOAB" debuted at #1 on the Billboard 200 Chart and was nominated for Best Rock Album at the 2017 Grammy® Awards. The RIAA platinum selling release was the highest selling rock album and fourth-highest selling album released in 2016, according to Nielsen Soundscan. "DOAB" has also spawned RIAA certified gold singles “Hallelujah,” “LA Devotee,” Don’t Threaten Me With A Good Time,” and platinum singles "Death Of A Bachelor,” "Emperor's New Clothes,” and “Victorious." The band’s song “House of Memories” off of DOAB is currently having a TikTok moment with over 2.1 billion views. Panic! At The Disco have been nominated for multiple awards, including the Grammys, Teen Choice Awards, Billboard Music Awards, Alternative Press Music Awards, Kerrang! Awards, VMAs and more. In 2017 Urie made his Broadway debut, first starring as Charlie Price in the critically acclaimed, TONY Award-winning, Broadway hit Kinky Boots.  In 2018, he received a TONY Award nomination for “Best Original Score Written For Theatre" for the song he wrote called “Simple Sponge” for SpongeBob SquarePants: The Broadway Musical. Outside of music, Urie founded the Highest Hopes Foundation - an umbrella fund which supports the efforts of non-profit organizations that lead, develop, and advocate support for human rights for all people and communities subject to discrimination or abuse on the basis of gender, race, religion, sexual orientation and gender identity.