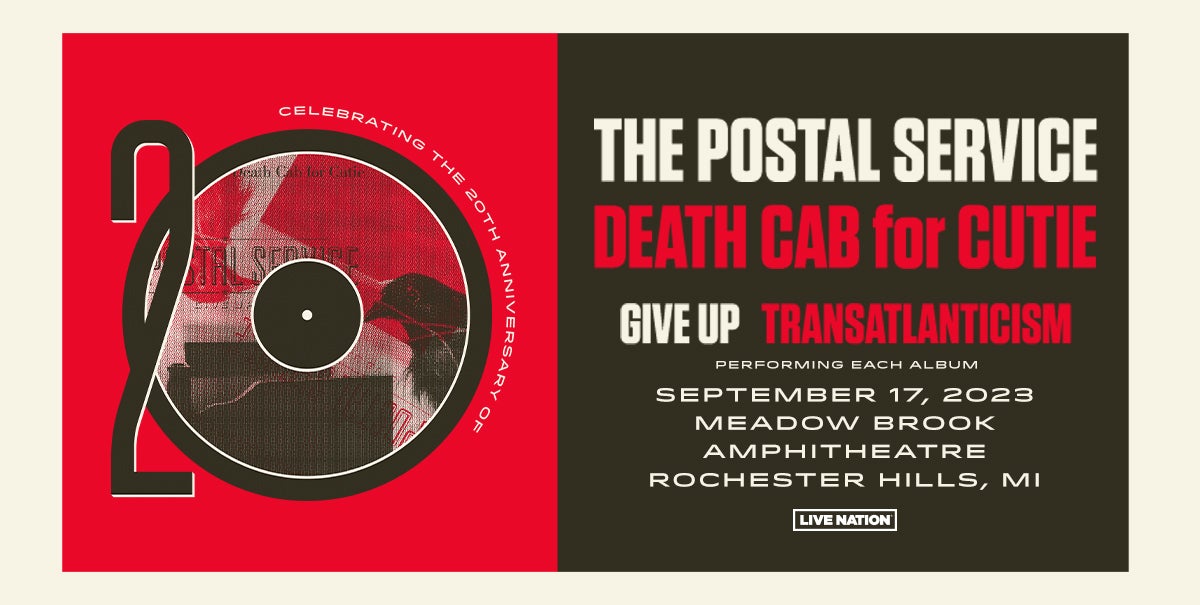 Indie rock titans The Postal Service and Death Cab for Cutie have announced plans for a landmark 20th anniversary co-headline North American tour. The extraordinary live run will see both iconic groups performing their seminal 2003 albums in full – The Postal Service’s RIAA Platinum-certified Give Up and Death Cab for Cutie’s RIAA Gold-certified breakthrough fourth studio LP Transatlanticism – two classics released within a mere eight months of one another that year. The tour includes a stop at Meadow Brook Amphitheatre on the campus of Oakland University on Sunday, September 17, 2023 at 7:30 p.m.

Benjamin Gibbard, the co-founder of both bands, will pull double duty throughout the tour, performing with The Postal Service – comprised of Gibbard, Jimmy Tamborello, and Jenny Lewis – as well as with Death Cab for Cutie (alongside Nick Harmer, Dave Depper, Zac Rae, and Jason McGerr).

“I know for a fact I will never have a year again like 2003. The Postal Service record came out, Transatlanticism came out. These two records will be on my tombstone, and I’m totally fine with that. I’ve never had a more creatively inspired year.” – Gibbard

The tour was announced this morning via an exclusive trailer on the band’s socials (watch HERE).

The sure to be highly-anticipated run will kick off September 8, 2023 at Cross Insurance Arena in Portland, ME and continue through mid-October, with highlights including shows at New York City’s famed Madison Square Garden, Berkeley, CA’s Greek Theatre, and Los Angeles, CA’s Hollywood Bowl.

The upcoming tour will mark the first live performances from The Postal Service in over a decade, following 2013’s hugely successful 10-year anniversary reunion tour for Give Up – an album which still stands today as Sub Pop’s second highest-selling album in the label’s history, second only to Nirvana’s Bleach. The reunion tour was captured for posterity on a live concert film, Everything Will Change, released in 2014 and subsequently on a live audio album released in 2020 to digital streaming platforms.

Meanwhile, 8x GRAMMY® Award-nominees Death Cab for Cutie are currently celebrating the release of their critically acclaimed 10th studio album, Asphalt Meadows. Produced by GRAMMY® Award-winner John Congleton (St. Vincent, Sharon Van Etten, Wallows), the new LP includes the explosive “Roman Candles” and chart-topping “Here to Forever,” the latter of which reached #1 at Alternative radio in October, after spending a record-setting nine weeks atop the AAA airplay chart this summer. The album received tremendous praise from outlets including the New York Times, Los Angeles Times, Vulture, SPIN, Stereogum, and Pitchfork, who lauded the record as “a late career masterwork… a restoration of their creative momentum when a mere ‘return to form’ would have sufficed.”

Ahead of the dates with The Postal Service, Death Cab for Cutie will continue their Asphalt Meadows world tour in January 2023, traversing North America, Europe, and the UK through June, with support from Momma, Slow Pulp, and Lomelda on select dates. This follows their much-celebrated headline tour this past Fall at venues including Forest Hills (NYC) and The Greek Theatre (LA). For remaining tickets and complete details, please visit www.deathcabforcutie.com.

Formed in Bellingham, WA in 1997, Death Cab for Cutie immediately entered the ranks of the era’s most definitive bands, thanks in large part to the remarkable power of co-founder, vocalist, guitarist, and lead songwriter Ben Gibbard’s complex, often bittersweet songcraft. The band made their worldwide popular breakthrough with 2003’s RIAA gold certified Transatlanticism, later named by NPR as one of “The Decade’s 50 Most Important Recordings.” Fueled by critical acclaim, an array of high-profile soundtrack placements, and such hit singles as “The Sound of Settling” and “Title and Registration,” the album debuted among the upper half of the Billboard 200 – Death Cab for Cutie’s first ever entry on the overall chart. A 10th anniversary edition of Transatlanticism containing previously unheard demos and outtakes arrived in 2013, prompting NPR to write, “For all its ubiquity and imitators, Transatlanticism holds up as an exquisitely produced, largely flawless record in which every song is bound to serve as someone’s favorite.”

2003 also saw Gibbard and Los Angeles, CA-based multi-instrumentalist Jimmy Tamborello (Dntel, Figurine) unite as The Postal Service, a long distance collaboration named for their working method of exchanging tracks via the US Mail. The duo – joined by a number of friends including singer-songwriter Jenny Lewis – proved a phenomenon with the February 2003 release of their one and only studio LP, Give Up, earning worldwide applause and eventual RIAA platinum certification thanks to infectious electro-pop smashes like “The District Sleeps Alone Tonight” (a top 3 sensation on Billboard’s “Hot Dance Singles” chart), “We Will Become Silhouettes (which reached the top 3 on the Canadian Singles Chart), and of course, the magical RIAA gold certified “Such Great Heights.” The album’s stature continued to grow in the years following its original release, ultimately spending 19 non-consecutive weeks at #1 on Billboard’s “Top Electronic Albums” chart. In 2013, The Postal Service reunited to mark the 10th anniversary of Give Up with their biggest headline tour ever, along with top-billed performances at such international festivals as Coachella, Primavera Sound, Lollapalooza, and Sasquatch. In addition, a commemorative 10th anniversary edition of Give Up saw the singular collection expanded with 15 bonus tracks, including two brand new songs, “A Tattered Line of String” and “Turn Around.”