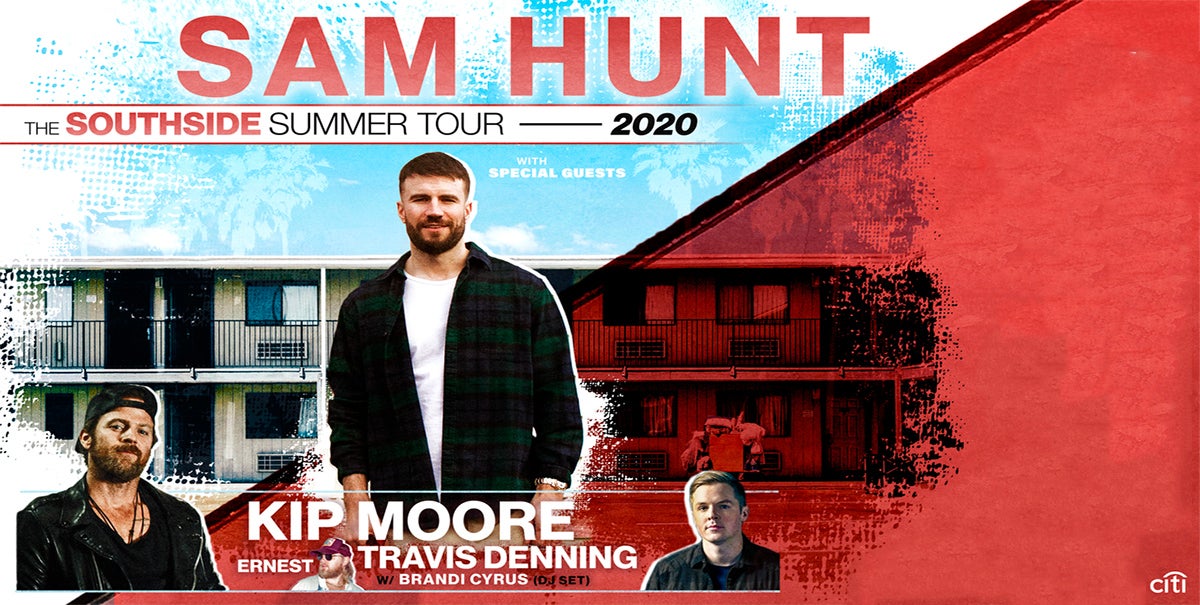 Multi-Platinum-selling, award-winning hitmaker Sam Hunt recently introduced fans to his new song, “Kinfolks”- already Top 5 at country radio. Leaning on the sentiment of “you can’t make old friends,” Hunt exemplifies the importance of bringing a new relationship into the mix and comfortability of home. “Kinfolks” follows Hunt’s Grammy®-nominated, Triple-Platinum-selling debut album, Montevallo (MCA Nashville), which topped the Billboard Country Albums Chart in its first week and it remains the best-selling debut album for a country artist since 2011; and his three-week #1, 6x Platinum-selling, Grammy®-nominated smash, “Body Like A Back Road.”

Montevallo produced four #1 singles and five Platinum and Multi-Platinum-selling hits including “Leave the Night On,” “House Party,” “Take Your Time,” “Break Up In A Small Town” and “Make You Miss Me.” Then, Hunt’s “Body Like A Back Road” release shot to #1 on the Billboard Hot Country Songs chart where it remained for an unprecedented 34 consecutive weeks, shattering the record for most weeks atop the nearly 59-year-old chart. “Body Like A Back Road” was also the #3 most-downloaded all genre song of 2017.

Called “stylistically provocative” by The New York Times and “deceptively phenomenal” by The Washington Post, Hunt has received accolades from Associated Press, Billboard, Los Angeles Times, NPR, Rolling Stone, SPIN Magazine, Village Voice, The New York Times, The Washington Post and more. Since the Montevallo’s 2014 release, Hunt has accumulated over 6.85 billion global streams and has earned 22 million RIAA certified units. Hunt is currently in the studio finishing up a new project expected in the new year. For information on Sam Hunt, visit www.SamHunt.com.

Multi-Platinum singer/songwriter Kip Moore’s “pulsing” (Billboard) new single “She’s Mine” is currently rising at country radio and is taken from his upcoming fourth studio album, of which more details will be revealed soon. The forthcoming project follows his Room To Spare: The Acoustic Sessions EP which sparked his “wildly successful” (Chicago Tribune) sold-out acoustic tour and his third studio album Slowheart, which garnered instant praise from critics as his “most complete, cohesive declaration of his artistic sensibilities yet” (NPR), as well landing on multiple “Best Of” lists including Entertainment Weekly, Rolling Stone, UpRoxx, Bobby Bones Show and many more. Slowheart included Moore’s fourth #1 single and follows the critical acclaim that surrounded Moore’s sophomore album Wild Ones and his Platinum debut album Up All Night that spawned three #1 hit singles. Next up, CMA “International Artist Achievement Award” nominee Kip Moore will hit the road for another international trek, returning to his Australian fan base in 2020 for headlining arena dates in Melbourne, AU on 3/17 and Sydney, AU on 3/18. Moore will also headline Australia’s premiere Country music festival, CMC Rocks QLD 2020, taking place in Willowbank, AU 3/20-3/22. For more information, visit kipmoore.net.

A native of Warner Robins, Georgia, singer/songwriter Travis Denning’s current Top 20 single “After A Few," is ascending the country radio charts. The “memorable” song showcases Denning’s “future star power” (Billboard) and was co-written by Denning with Kelly Archer and Justin Weaver. The track follows his Top 40 debut single “David Ashley Parker From Powder Springs.” The Mercury Nashville recording artist is kicking off 2020 as support on Dustin Lynch’s “Stay Country” Tour. Denning has previously opened shows for Cole Swindell, Alan Jackson, LANCO, Riley Green and his first headlining “Heartbeat Of A Small Town Tour.” Denning has been spotlighted by Rolling Stone for his “everyman worldview that evokes his small-town, big-hearted upbringing and a sound that is a wide tent – fun, modern country with rock-guitar licks” and was selected this past year as an Opry NextStage recipient and CMA KixStart Artist, as he makes his mark within the industry. Inspired at a young age, Denning developed a love for Country, pop, rock and heavy metal and started playing local bars from the age of 16, as he built a strong following from his distinctive songs and raucous guitar solos. A prolific writer with an unquestionable stage presence, Denning moved to Nashville and secured outside cuts by Jason Aldean, Justin Moore, Michael Ray and Chase Rice. For further information, visit travisdenning.com.

Adopted at three weeks old and victim to a freak heart attack at 19, surmounting ridiculous odds has always been ERNEST’s gift. He learned banjo and guitar before he was a teen but quickly developed a passion for Hip-Hop and R&B as well, citing Eminem, Ludacris, and George Strait as some of his earliest influences. Discovering an equally powerful love of songwriting, ERNEST began working alongside Nashville songwriting royalty like the Warren Brothers and has since earned cuts from Florida Georgia Line (“Blessings”), Chris Lane (“Big, Big Plans”), Diplo feat. Morgan Wallen (“Heartless”), Jake Owen, Mason Ramsey, and more. Beginning his career as an artist, the Tropical Cowboy showcases his distinct sound on his Big Loud Records debut project, Locals Only, out now. ERNEST is currently on the road as a special guest on Chris Lane’s “Big, Big Plans Tour.”

Brandi Cyrus is a lifetime music lover, and performer who has spent countless hours on stages, or in front of cameras. Born into music family royalty, the tastemaker and entertainer has always forged her own path and was signed to a major label as a recording artist as half of pop duo Frank & Derol. Having also performed alongside family members Billy Ray Cyrus and Miley Cyrus, Brandi’s lifelong love affair with music stimulated her transition to full time DJ, where she has since opened for notable artists including Fergie and G-Eazy. As an influencer and commentator, she has been invited to appear as an on-air correspondent for the likes of Fuse TV, Vibe Magazine, and Spin media, and most recently, she was featured alongside her mom Tish Cyrus in their beloved Bravo series Cyrus Vs Cyrus: Design & Conquer. Additionally, she co-hosts the successful podcast Your Favorite Thing Podcast and is founder and sole editor of the blog, Style Native.