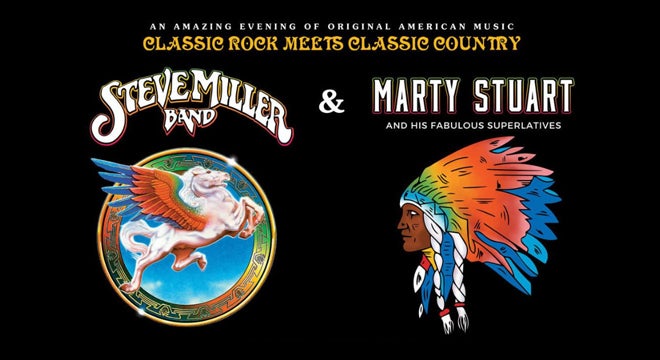 Steve Miller Band will be hitting the road again this year – first this spring for an evening with the Steve Miller Band, and then this summer with the great Marty Stuart and His Fabulous Superlatives supporting a 36-city cross-country trek – “An Amazing Evening of Original American Music – Classic Rock Meets Classic Country.” The summer tour visits Michigan Lottery Amphitheatre at Freedom Hill as part of the Fifth Third Bank Concert Series on Sunday, June 30 at 7:30 p.m.

“I know it is going to be one of the best musical pairings we’ve ever done and an amazing evening of great American music,” says Miller. “For those Steve Miller Band fans who don’t know Marty Stuart And His Fabulous Superlatives – Marty Stuart, Kenny Vaughan, Harry Stinson & Chris Scruggs – together they are one of the best singing and playing bands EVER and not to be missed. Marty is one of the finest musicians in the world – an amazing singer, song writer and country music scholar and it’s an honor to have him join us this summer for an unbelievable evening of original American music.”

Says Stuart, “Steve Miller is a treasure and a true world-class musical citizen. I so respect him as a singer, a songwriter, guitar slinger, historian, art connoisseur, bandleader and friend. It’s an honor for the Superlatives and I to run the roads of the nation and share the stage with the Steve Miller Band this summer. I predict some amazing musical moments out there on the horizon.”

In 2018, the legendary Steve Miller Band’s Complete Albums Volume 1 (1968-1976) debuted as an unprecedented and acclaimed 9LP vinyl box set, individual 180-gram black vinyl LPs and color vinyl LPs, and HD digital audio. Today, Steve Miller and Capitol/UMe are incredibly excited to announce plans for the May 24 global release of the collection’s second volume, presenting nine more Steve Miller Band studio albums in a new 180-gram vinyl box set called Complete Albums Volume 2 (1977-2011). Spanning the band’s multi-platinum 10th studio album, 1977’s Book of Dreams, through 2011’s Let Your Hair Down, the albums have all been remastered and are available now for preorder. Each album is also available for preorder as individual 180-gram black LPs to be released on the same date, as well as limited edition 180-gram color vinyl LPs for sale exclusively via uDiscoverMusic.