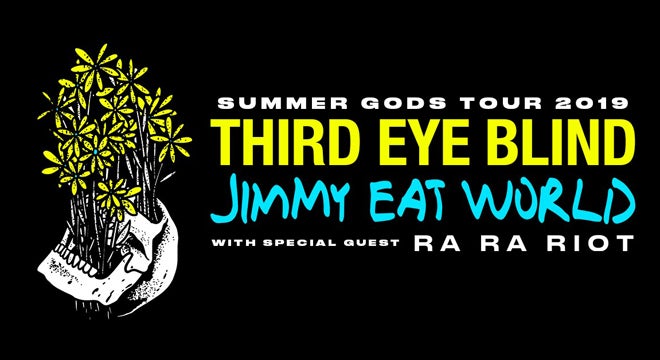 Third Eye Blind has announced the 30-city “Summer Gods Tour,” together with Jimmy Eat World, will visit Michigan Lottery Amphitheatre at Freedom Hill as part of the Fifth Third Bank Concert Series on Friday, June 28 at 7 p.m. Ra Ra Riot will join on all shows as tour opener. Produced by Live Nation, the North American amphitheater tour will kick off June 14 at the Greek Theatre in Los Angeles, with dates in Chicago, Atlanta, Houston and more, before wrapping August 3 in Irvine, CA at FivePoint Amphitheatre.

“The most scintillating, inspiring collective moments of my life have been outdoors in the summer exploding with music,” says Third Eye Blind frontman, Stephan Jenkins. “Those sensations travel from when I was a little kid and rock music was brand new to our last Summer Gods tour, when everything is magically new again. I seek to create that exact blissed-out state of aliveness on tour this summer.“

Touring in the summer “feels like more of a festival thing, because Third Eye Blind takes a lot of time in picking out the bands to play with us,” Jenkins tells iHeartRadio’s on-air personality, Andrew Harms, in an exclusive interview that ran earlier this morning across iHeartMedia’s network of Alternative stations.

“We couldn’t be more excited to spend our 25th summer as a band touring the country of our birth to play music for our American fans!” says Jimmy Eat World, in a statement. “Thanks to Third Eye Blind for inviting us to be a part of this amazing tour. We can’t wait to hang out with our fans as well as making some new friends!”

Following rare club dates in LA and NYC to try out new music, Third Eye Blind is now back in studio working on the follow up to Dopamine (2015) and 2018’s Thanks for Everything, an EP of songs they love, with proceeds benefiting the Andy Warhol Museum in Pittsburgh.

Third Eye Blind has been touring greener every year. Because the oceans need our help, the band and crew have been free of water bottles since 2017. This year, to offset the tour’s carbon footprint, Third Eye Blind will be voluntarily investing in a carbon offset project in Alaska managed by ClimeCo, The American Land Conservancy and the Rocky Mountain Elk Foundation. Additionally, to offset audience travel – the biggest source of carbon emissions from the tour – a portion of each ticket sold will support a US-based ClimeCo carbon offset project. (Calculate your own carbon footprint here.)

“Music and surfing are all foundational in my life and the longer I go, the more so it is not a big step to seek to make our tours ocean friendly,” adds Jenkins. “Simple – skip single use plastic, carbon offsets and encourage other along the way.”

This Alaska-based offset project is the first of its kind in the region. It supports conservation work on Afognak Island which is home to a coastal temperate rainforest with old-growth trees that are between 180 and 250 years old, plus a regrowth of new trees from the past 30 years. Together, these new and old forests create the potential for absorbing millions of tons of carbon dioxide from the atmosphere.