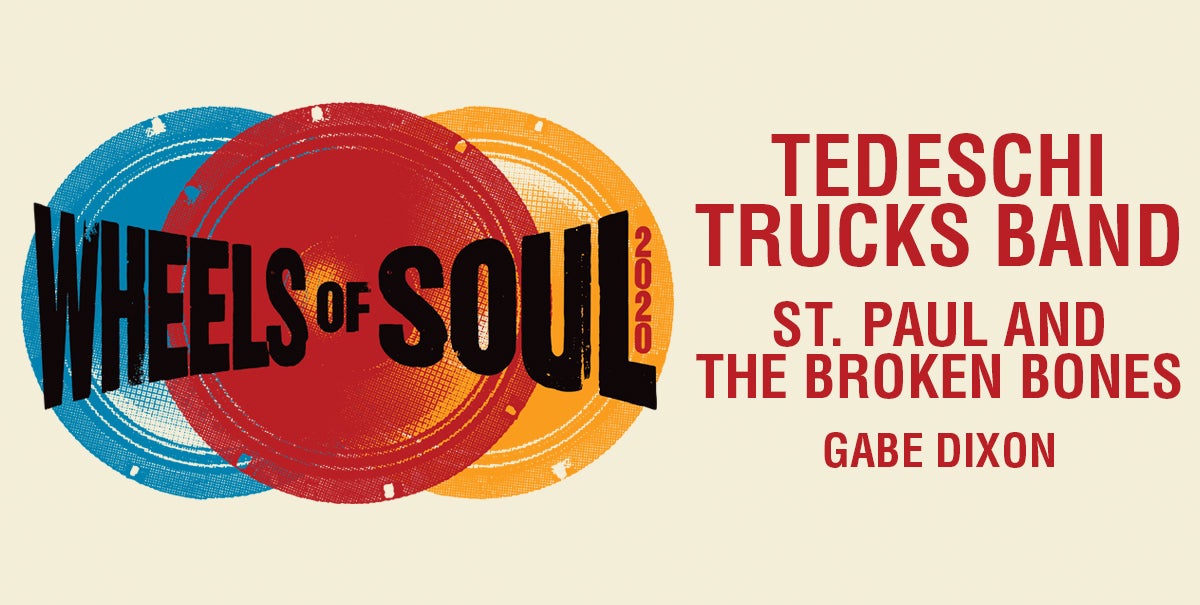 Tedeschi Trucks Band’s Wheels of Soul tour – a standout of the summer concert season – is returning with two performers who exemplify the best of the modern soul movement. “Wheels of Soul 2020” welcomes St. Paul and The Broken Bones, as well as TTB’s own talented keyboardist Gabe Dixon and his trio, to the sixth annual theater run. The five-week tour will visit more than 20 cities across the country, including the Fox Theatre in The District Detroit .

The tour will kick off June 26 in TTB’s hometown of Jacksonville, Florida and conclude with two nights at Colorado’s Red Rocks Amphitheatre on July 31 and August 1. Wheels of Soul will be a highlight of TTB’s 2020 itinerary, as the Grammy®-winning group plans to reduce their touring load after 200+ days on the road each year.

Led by the husband and wife team of guitarist Derek Trucks and vocalist/guitarist Susan Tedeschi, the 12-member strong Tedeschi Trucks Band is acclaimed by critics and fans alike for their uncompromising commitment to bringing the highest level of musicianship to the stage. TTB has meticulously curated their flagship multi-band summer tour with the same focus on putting together not just a spectacular triple bill, but a true musical collaboration among the three bands to create a unique and unparalleled evening of music. Past guests have included Sharon Jones & The Dap-Kings, Los Lobos, The Wood Brothers and The Marcus King Band among several others and earned the tour a reputation as “nothing short of exhilarating,” (Salon) and “nonstop excellence, virtuosity and musical community on all fronts.” (Chicago Blues Guide).

“We’ve talked about having St. Paul and The Broken Bones out with us before – their sound is fantastic and certainly a natural fit for Wheels of Soul.  And we enjoy the fun of touring and collaborating with another big band,” says Derek Trucks. “Adding Gabe to the bill was a no brainer. He’s insanely talented and it will be a privilege to be able to showcase what he can do.”

Paul Janeway of St. Paul and The Broken Bones says: "It’s an honor to open for such talented and kind people. I hope they enjoy having us as much as we enjoy getting to see their show every night."

In what has become a tour tradition, fans can expect 2020’s installment of Wheels of Soul to deliver onstage guest sit-ins and unpredictable set lists with a large catalog of songs covering a wide range of musical tastes. Gabe Dixon will pull double duty, taking the stage first with his trio, then joining his TTB bandmates to close out the evening.

Last year TTB performed over 65 songs during the summer trek, drawing on all four of its studio albums, including new fan favorites “I’m Gonna Be There” and “Shame,” from the 2019 releases Signs, and companion EP, High and Mighty.  Fans were also treated to surprising debuts like Elton John’s “Border Song,” Leon Russell’s “Stranger in a Strange Land,” and rarities like The Band’s “Don’t Do It.”

One of contemporary music’s most respected bands, Tedeschi Trucks Band is unrivaled in their blend of American soul, blues, country and rock.  Now celebrating 10 years together, the ensemble’s commanding performances and exceptional musical chemistry are perpetual hallmarks of the can’t-miss-concert experience fans have come to anticipate live. Simply stated by the Houston Press, “The band seamlessly showcases the genuine transformative power of music.”

Formed in 2012, St. Paul and The Broken Bones has spent the last seven years touring the world, receiving critical acclaim for stirring and dynamic live performances. The Birmingham, Alabama-based rock ‘n’ roll/soul band has opened for The Rolling Stones, headlined two nights at Ryman Auditorium, appeared on Jimmy Kimmel Live, Conan, Austin City Limits and twice on The Late Show with Stephen Colbert, and has issued an EP alongside three full-length albums, Half the City (2014) Sea of Noise (2016) and Young Sick Camellia (2018). Led by the insightful lyrics and vocals of their electrifying front man Paul Janeway, St. Paul and The Broken Bones possess the unique ability to make you dance and shout while simultaneously making you think.

Nashville bred singer-songwriter and keyboardist Gabe Dixon has been penning honest and heartfelt tunes to a growing fan base since he first emerged in 1999. His song “Live Again” was recently covered by Garth Brooks and many of his songs have been featured in films including The Proposal and TV shows such as Nashville, Grey’s Anatomy and Parks & Recreation. Along with his own appearances on Jimmy Kimmel Live! and The Late Late Show, Dixon has performed with Paul McCartney, Alison Krauss & Union Station, Supertramp, Loggins & Messina, and O.A.R. In 2019, he began touring with Tedeschi Trucks Band while also working on his new album, which is slated for release in 2020.

Watch Gabe Dixon: “I Believe In Our Love”