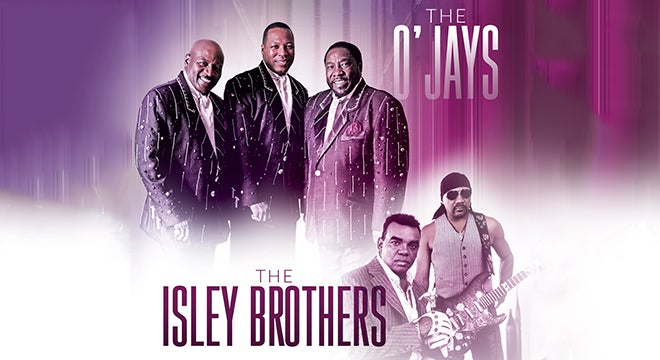 The O’ Jays and The Isley Brothers

The O’ Jays and the Isley Brothers announced a performance at the Fox Theatre in The District Detroit on Sunday, October 27 at 7:30 p.m.

The O’ Jays are touring history, a connection to an era and a sound that formed the soundtrack for the lives of several generations. The O’ Jays are still hitting the road with the same electrifying energy they’ve had for over 50 years. With this magic formula, often called “The Sound of Philadelphia,” The O’ Jays scored the first number one and million-seller, “Backstabbers.” Subsequently, they succeeded with various chart-topping pop and R&B singles including “Love Train,” “Put Your Hands Together,” “For The Love of Money,” “I Love Music,” “Darlin’ Darlin’ Baby (Sweet, Tender, Love),” “Livin’ For The Weekend” and “Use Ta Be My Girl.” The O' Jays were inducted into the Rock & Roll Hall of Fame in 2005. They were inducted into the Vocal Group Hall of Fame in 2005 and honored with BET's Life Time Achievement Award in 2009. In 2013, they were inducted into The Official R&B Music Hall of Fame. Today, the songs of The O’ Jays are still being used in many movies, commercials and TV shows.

The Isley Brothers formed in the early 1950s in Cincinnati, Ohio and today are considered one of the most important and influential groups of the last half-century. The group scored their first hit with the call-and-response classic “Shout” (now covered by countless bands across the country) and in 1962 reached true mainstream success with “Twist and Shout,” which became their first Top 40 hit on both the pop and R&B charts. At the end of the decade, The Isley Brothers scored another phenomenally successful hit with “It’s Your Thing” which earned them the 1969 Grammy® Award for Best R&B Vocal Performance. In 1992, the Isley Brothers were inducted into the Rock & Roll Hall of Fame. Continuing steadily after the success of 1996’s Mission to Please, the group returned to the top of the charts with Eternal’s 2001 hit, “Contagious.” 2003 saw the gold certification of Body Kiss, and 2006’s Baby Makin’ Music peaked at No. 5.