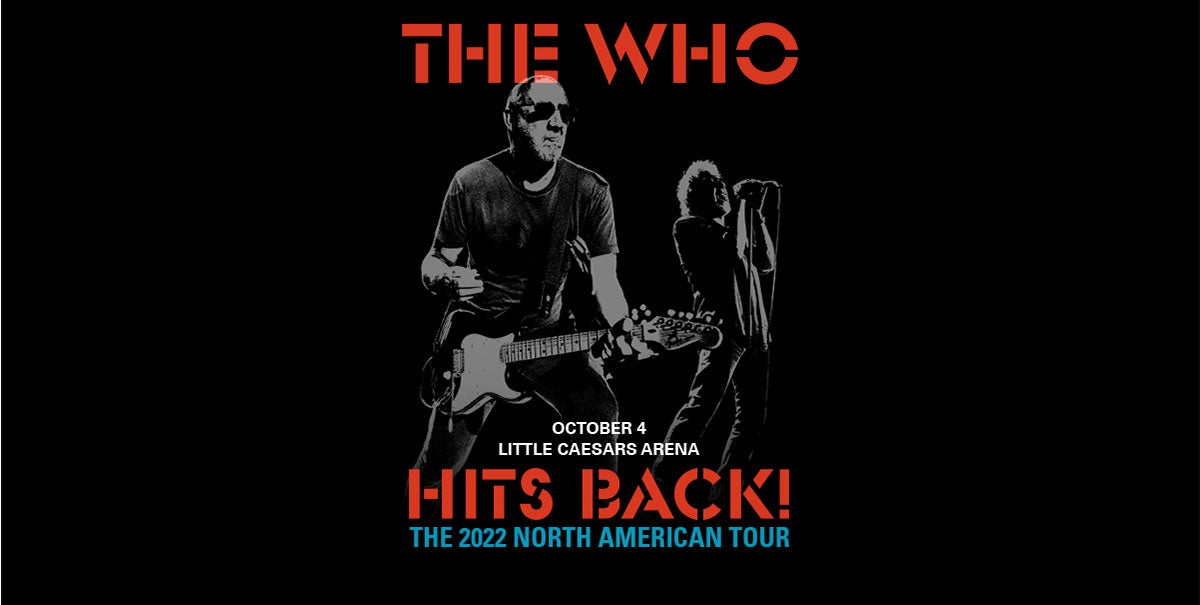 Legendary rock band The Who have announced a brand-new tour for 2022, “The Who Hits Back!” and will perform at Little Caesars Arena on Tuesday, October 4 at 7:30 p.m. The iconic band’s upcoming North American trek promises to be another rock n’ roll knockout, bringing singer Roger Daltrey and guitarist/songwriter Pete Townshend back to U.S. venues two years after their acclaimed “Moving On! Tour,” which wowed audiences with a series of sold-out dates. Produced by Live Nation, “The Who Hits Back! Tour” will again share the stage with some of the finest orchestras in the U.S. and Canada. The Who will be joined by special guest, singer/songwriter (founder of Barenaked Ladies) Steven Page.

The Who are hitting most of the cities they were set to play in 2020 with multiple new stops, including shows in New Orleans, L.A. at the New Orleans Jazz Festival on April 30, and a much-anticipated performance at New York City’s Madison Square Garden on May 26. After a summer break, The Who will continue in the fall, including stops in Chicago, IL at United Center on October 12, and in Los Angeles at the Hollywood Bowl on November 1.  “The Who Hits Back! Tour” winds down with two shows in Las Vegas, NV on November 4 + 5 at Dolby Live at Park MGM.

Commenting on “The Who Hits Back! Tour,” Roger Daltrey says, “Pete and I said we’d be back, but we didn't think we’d have to wait for two years for the privilege. This is making the chance to perform feel even more special this time around. So many livelihoods have been impacted due to Covid, so we are thrilled to get everyone back together - the band, the crew and the fans.  We’re gearing up for a great show that hits back in the only way The Who know how.  By giving it everything we got.”

The Who’s wildly successful “2019 Moving On! Tour” brought the band’s iconic brand of incomparable rock through 29 cities, including a rollicking sold-out show in Boston’s historic Fenway Park, and a memorable Seattle show where Pearl Jam frontman Eddie Vedder joined them onstage for a rousing version of “The Punk And the Godfather.” The tour generated the most unanimous outpouring of acclaim from critics and fans of any live rock show in 2019, winning raves across North America for the orchestral dynamic as well as the duo’s cathartic rock firepower and intimate acoustic numbers. “They’re not getting older. They’re getting better. You better, you better, you bet.” hailed the Worcester Telegram, with Pollstar Magazine affirming “Daltrey is in peak form, and so is Townshend, lavishing his trademarked windmill guitar motion.”

For more information about “The Who Hits Back! Tour,” 2022 dates, visit TheWho.com.

The Who are one of the top three greatest rock legacies in music history.  Their music provoked explosive change and spanned what many critics declare is rock’s most elastic creative spectrum, with Pete Townshend’s songwriting moving between raw, prosaic, conceptual and expressively literate.  Their visionary sense of stagecraft headed by Roger Daltrey’s soaring vocal prowess is topped off by the band’s blistering rhythm section.  With both Roger and Pete delivering their memoirs in recent years (Pete’s Who I Am was released to much acclaim in 2012, and Roger’s autobiography, Thanks A Lot Mr. Kibblewhite; My Story, was embraced by critics in 2018) it’s fitting that the two remaining WHO members have shared their incredible legacy in literary fashion, for few bands have had a more lasting impact on the rock era and the reverberating pop culture than The Who.

Emerging in the mid-1960s as a new and incendiary force in rock n’ roll, their brash style and poignant storytelling garnered them one of music’s most passionate followings, with the legendary foursome blazing a searing new template for rock, punk, and everything after.  Inducted into the Rock n’ Roll Hall Of Fame in 1990, the band has sold more than 100 million records worldwide, placing 27 top-forty singles in the United States and United Kingdom and earning 17 Top Ten albums, including the 1969 groundbreaking rock opera Tommy, 1971’s pummeling Live At Leeds, 1973’s Quadrophenia and 1978’s Who Are You.  The Who debuted in 1964 with a trio of anthems “I Can’t Explain,” “The Kids Are Alright” and “My Generation.” Since then they have delivered to the world hits such as “Baba O’Riley,” “Won’t Get Fooled Again,” “Pinball Wizard,” “Who Are You,” and “You Better You Bet.”

In 2008, they became the first rock band ever to be awarded the prestigious Kennedy Center Honors. The Who has performed all over the world including global music events for the Super Bowl XLIV Halftime Show in 2010 and closing the London 2012 Summer Olympics. The Who continued their charity work by playing a concert in January 2011 to raise money for trials of a new cancer treatment called PDT. In December 2012 they performed at the Hurricane Sandy Benefit in New York. In January 2014 they played a set on the U.S. television special to support the charity Stand Up To Cancer. In November 2012 Daltrey, with Townshend at his side, launched Teen Cancer America. The charity is now established in the USA, with offices in Los Angeles and devoted Teen Cancer units being opened in hospitals all over the U.S. TCA’s work has impacted over 5,000 young people and their families nationwide during the last ten years.