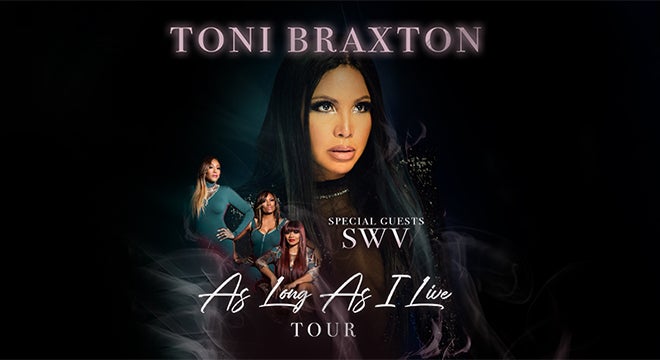 Seven-time Grammy® Award-winner Toni Braxton will be taking her “As Long As I Live Tour” on the road in support of her current Sex & Cigarettes album.  The tour will perform at the Fox Theatre on Thursday, February 14 at 8 p.m.  SWV, one of the best-selling girl groups of all time, will be a special guest. Toni’s Sex & Cigarettes album entered the charts in the Top 5 and the “As Long As I Live” single was #1 on the charts for nine weeks. Both Toni and SWV will be performing all their #1 hits on this tour.

The distinctive, sultry vocals of seven-time Grammy Award®-winning recording artist Toni Braxton, singer, songwriter, record producer, actress and philanthropist, have been celebrated internationally ever since she was first introduced to the world by Babyface and L.A. Reid in 1992.  Her self-titled debut album released the next year was a 10 million-selling phenomenon that generated Toni’s first Grammys® in 1994, for Best New Artist and Best Female R&B Vocal (“Another Sad Love Song”).  The album’s longevity led Toni to win her second Best Female R&B Vocal Grammy® the following year (for “Breathe Again”).  Her second album, Secrets arrived in ‘96, and history repeated itself with 15 million worldwide sales.  At the Grammy® Awards in 1997, Toni became only the second woman in history (beside Dionne Warwick) to win Best Female Pop Vocal (“Unbreak My Heart”) and Best Female R&B Vocal (“You’re Makin’ Me High”) in the same year.  She returned to the Grammy® podium in 2001, to claim another Best Female R&B Vocal award (“He Wasn’t Man Enough,” from the double-platinum album The Heat).  In 2015, Toni won a Grammy® for Best R&B Album, for Love, Marriage & Divorce duet outing with Kenny “Babyface” Edmonds.

Into the millennium, Toni blossomed into an acting career with Broadway musical roles in Beauty and the Beast, Aida and After Midnight and a dramatic turn in the Lifetime movies Twist of Faith, Unbreak My Heart (based on her novel) and Faith Under Fire. She and her sisters currently enjoy huge success in Braxton Family Values, one of WE tv's flagship reality series, returning for its sixth season. Raising her two sons Denim and Diezel, Toni balances her career demands with the high priorities of family, health, public service and charity work, particularly on behalf of the two diseases that have impacted her family directly: She is living with Lupus and her youngest child is living with Autism.  Early detection and intervention has helped both Braxtons to be role models on how to live normal lives with these conditions.  Toni is also a proud spokesperson for Autism Speaks and an Ambassador to the UN.